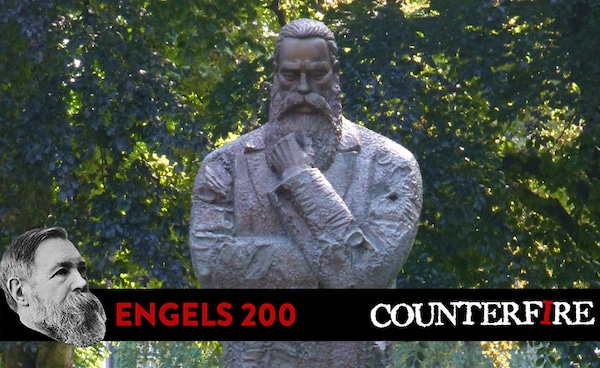 As part of our series on the revolutionary Frederick Engels, on the 200th anniversary of his birth, Elaine Graham-Leigh looks at Engels’ The Origins of the Family, Private Property and the State

All page references are to the Pathfinder Press 1972 edition.

The corollary to this, of course, is that elements in our societies arising from an inherent human nature can’t fundamentally be changed. The key importance of Engels’ The Origin of the Family, Private Property and the State lies in how, on the contrary, it sets out that class and women’s oppression are not the unavoidable result of human nature. Their development was rather a historical process, neither inevitable nor irreversible.

In writing The Origin of the Family, Engels relied on the work of anthropologist Lewis H Morgan, whose Ancient Society was published in 1877. Engels explained in his preface that Marx had ‘planned to present the results of Morgan’s researches in connection with the conclusions arrived at by his own…materialist investigation of history’ (p.27); work which Engels had taken on after Marx’s death. This is important, because while the research may have been Morgan’s, the method and conclusions were Marx and Engels’ own.

Following Morgan, Engels saw ancient human societies moving through various different forms of marriage and household structure. The crucial shift though was from a society based on the gens, in which everyone was equal and all resources were held in common, to a class society in which private property was the norm. Engels posited that this shift occurred as a result of the domestication of animals and development of herds of livestock. As these increased the wealth in society, they and the surplus they created started to become the property of specific individuals, rather than of all the gens together. This then applied to other forms of property as well. As Engels commented:

‘On the threshold of authenticated history we find everywhere the herds are already the separate property of the family chiefs, in exactly the same way as were the artistic products of barbarism, metal utensils, articles of luxury and, finally, human cattle – the slaves.’ (p.82)

This was then the beginnings of a class system, as the means of production moved from collective control to control by a ruling class. The household, the reproduction of labour, was no longer a collective concern but a private one, the business only of the household members and the man at the head of it. The development of class therefore also meant the oppression of women.

Engels, following Morgan, argued that in pre-class societies, the important relationships were via the mother, not the father. In some societies, a man would be expected to look out for his sister’s children before he paid special attention to his own. Once some men were able to amass private property in the form of herds, however, (and Engels does assume that this would be men specifically who were the herdsmen), they would start to want to be able to pass this on to their own children. To be able to identify and control their own children, men would have to control the women they had children with. Thus, women were turned from independent participants in an equal society into another type of property. This, as Engels put it, was ‘the world-historic defeat of the female sex.’ (p.85)

Many of the details that Engels uses from Morgan are no longer thought to be correct. It would be something of an indictment of twentieth and twenty-first century historians, after all, if our understanding of human prehistory had not developed at all since Morgan wrote in 1877. Taking into account more recent evidence, an account of the development of some of the earliest class societies, such as in Mesopotamia in the Neolithic, would see first of all that a greater surplus, whether of domesticated animals or as a result of sedentary agriculture, would encourage the emergence of a chief figure, whose role was to see that resources were shared fairly rather than to amass them for themselves. Over time, some hierarchy would have developed, leading to a point at which the chiefs would have ceased to be distributors and would have become controllers of material wealth on their own account. It would have been at that point that the walls would go up around the centre of chiefly power and the chiefs’ retainers would have become the tax collectors preying on the exploited villagers, now at the bottom of the hierarchy in a class society.

Despite the subsequent developments in our understanding of human prehistory, Marx and Engels have been influential on generations of historians and archaeologists(1) Engels’ method and his central analysis of the development of class and women’s oppression still hold. That women’s oppression is a consequence, not of an inherent tendency for men to oppress women but of the development of class society has in particular been borne out since Engels wrote by further work on non-class societies in which women were not oppressed. This appears to have been the case, for example, in the egalitarian ancient Anatolian city of Catal Hüyük, where art and grave goods suggest that there was little or no division of labour according to sex.

Discoveries and analysis since the nineteenth century enable us to see non-class societies as potentially far more complex than allowed for in Morgan’s work. For Morgan, societies all move through three stages: savagery, barbarism and civilisation. Morgan apparently did not mean these terms pejoratively, but simply copied them from previous scholars (introduction, p.9). Engels, similarly, uses the terms while clearly respecting ‘uncivilised’ peoples as Morgan had, commenting for example, apropos of the fall of the Roman Empire in the west, that ‘only barbarians are capable of rejuvenating a world labouring the throws of a dying civilisation.’ (p.193). ‘Savagery’ and ‘barbarism’ are however essentially pejorative terms, and even Engels retains a sense that the primitive communism of the gens was only suitable for sparse populations with low standards of living and few surplus resources.

This no longer seems to be true. It is now recognised that Western colonialism significantly and deliberately underestimated the extent to which indigenous people in the Americas, Australia and Africa shaped their environment through agricultural practices which, while they did not look like European agriculture, were no less sophisticated. The Native American tribes studied by Morgan may well have been rather richer in resources than he supposed. It is also now clear that some Neolithic societies, such as cities in Anatolia and the Indus Valley, managed to combine complexity, sedentarism and a relatively high standard of living for the time with egalitarianism. It is not the case that any advance on the most basic subsistence level means that class will automatically develop.

Engels can be read here as setting out a stageist view of history, where societies move inevitably from savagery, to barbarism, civilisation and then finally to socialism. It is possible to take passages here in isolation to support such a reading of inevitability, such as when he comments about the end of primitive communism that ‘the power of these primordial communities had to be broken, and it was broken.’ (p.130) It is also true though that subsequent writers, such as Kautsky, developed Engels’ ideas in a definitely stageist direction, and that this may influence the light in which Engels’ original is viewed. It is important not to overlook how Engels, like Marx, believed firmly in historical contingency.

As Marx said, ‘Men make their own history, but they do not make it just as they please: they do not make it under circumstances chosen by themselves, but under circumstances encountered, given and transmitted from the past.’(2)There is nothing inevitable about it. Engels declared in his peroration that ‘democracy in government, brotherhood in society, equality in rights and privileges, and universal education foreshadow the next higher plane of society to which experience, intelligence and knowledge are steadily tending. It will be a revival, in a higher form, of the liberty, equality and fraternity of the ancient gentes.’ (p.217). Here he was being optimistic about the possibilities for and effects of proletarian revolution, not declaring his belief in the inevitability of revolution without action on the part of the proletariat.

A modern understanding of the development of class in societies from the Mesopotamian Neolithic onwards shows it to have been a much more drawn out and contested process than Morgan, and consequently Engels, thought. Engels knew that the spread of class was not complete across the world in his day, since he cites examples of non-class societies in America such as the Iroquois (we would now refer to them as the Haudenosaunee). He probably did not know that there is evidence that class had not fully developed in parts of Europe, such as Ireland, as late as the seventh century CE. Engels also did not have access to the archaeological work which suggests that class development was not all one-way. It is possible that one Anatolian city, Cayönü, for example, was the site of the first revolution in around 7300BCE, where a particularly unpleasant class society seems to have been violently overthrown and replaced by an egalitarian society.

None of these later discoveries contradict Engels’ analysis of the development of class and of women’s oppression as a concomitant. Engels’s work continues to show us that oppression and exploitation are not simply part of the human condition. They are historical developments, which were in no sense inevitable and which, if we could rewind the film, might happen a second time very differently. Right-wing commentators sometimes point to the blood-soaked history of class societies as evidence that an egalitarian society would never work. On the contrary, as Engels’ rousing conclusion emphasised, history shows us that socialism is not only necessary, but possible.