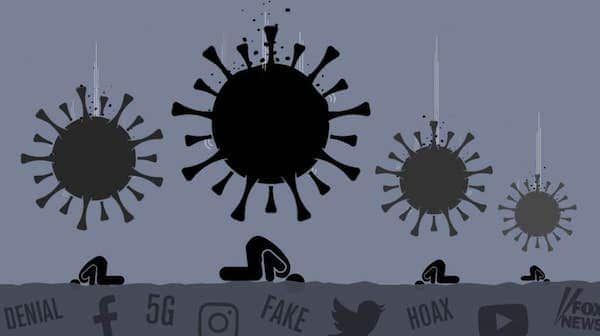 The current pandemic is giving humanity a crash course in apocalypse management. Whether COVID-19 is actually apocalyptic or not is debatable, but the pandemic has many of the characteristics that we associate with something of that scale. Like climate disruption, it’s global; like nuclear war, it’s deadly. Most importantly, like any crisis of this magnitude, it cannot be solved by a single country or region alone, no matter how powerful. Pushing back against COVID-19, let alone the apocalypse, requires cooperation, and not just at the level of the nation-state, but within communities as well. It is probably not a surprise that this is proving difficult.

It certainly comes as no surprise to those of us who have encountered the various novels, movies, or television shows about the end of the world: a lack of cooperation in the face of catastrophe is a common theme in apocalypse stories. Tales of an imminent eschaton often include selfish, fearful, and greedy people unwilling to help their neighbors or work together. It occurs frequently enough to be considered a narrative trope and sits at the heart of all sorts of post-apocalypse sagas. The uncooperative antagonists might be paranoid neighbors, armed gangs stealing food, or wannabe-warlords using basic resources like water as a means of control. Or, more frequently—and more simply—they could just be hoarders jealously guarding their supplies of toilet paper.

But COVID-19 has shown us that this paradigm is actually incomplete, and in a fairly surprising way. It’s something that authors of apocalyptic narratives have rarely, if ever, envisioned. It turns out that an unwillingness to cooperate can also arise from the complete denial that a global catastrophe is underway.

In this age of pandemic, such denial is frighteningly commonplace. Facebook, Twitter, and other platforms are filled with posts from individuals proudly trumpeting their unwillingness to wear a mask in public. Unfortunately, this kind of denial isn’t limited to poorly spelled social media posts. Noisy protests—sometimes armed—and reports of violent acts of defiance appear repeatedly in the news, and not just in the United States.

Although some of these restless groups accept that COVID-19 is a pandemic, they typically downplay the danger. It gets worse, though; it’s easy to find arguments online (or even on the fringes of mainstream media) that COVID-19 isn’t a real problem, or is actually a cover-up for the rollout of purportedly malevolent 5G technology, or was caused by Bill Gates. For an unsettlingly large part of the global populace, COVID-19 is a hoax intended to frighten us into submission.

There’s no reason to expect that this kind of thinking would be solely limited to a pandemic crisis. It’s very likely that this form of denial would also emerge amidst other global cataclysms, even a nuclear war or an incoming asteroid strike. It’s a morbidly comical image.

A resistance to facts doesn’t arrive spontaneously. Some of the denial of the risks of COVID-19 comes from religious or political beliefs, or simply from a lack of first-hand experience with the virus; sadly, COVID-19 causing the death of a family member or close friend is too often the only way to crack the wall of denial. Moreover, these populations also seem to overlap with groups conditioned to disbelieve anything they see in the mainstream news. The combination is dangerous. Communities well away from the places hit hardest could easily refuse to accept that an unthinkable catastrophe is truly underway, encouraged by trusted sources of information playing down the risk.

These trusted sources will often include friends and family members. Person-to-person transmission via social media networks is a fundamental pathway for the spread of misinformation. Such a pathway has been unmistakable in the information space around the current pandemic.

In effect, there isn’t just one virus, but two: the biological virus SARS-CoV-2 causing the disease, and the memetic virus comprising our beliefs and knowledge about the disease. Both see person-to-person transmission accelerated by irresponsibility, and both could lead to deadly consequences. The primary difference is that being surrounded by people infected with COVID-19 increases the likelihood of acquiring the biological virus, but it greatly reduces the risk of acquiring the cultural one. It’s hard to deny the reality of COVID-19 when it’s killing people you love.

The underlying problem is this: the ubiquity of information networks and the persuasiveness of misinformation are a dangerously volatile mix. Reality is generally complex and highly dependent on context for meaning, making the clear communication of ideas sometimes difficult. Malinformation (which encompasses misinformation, disinformation, and genuine error) is, conversely, quite often simple and readily-understood, making it easy to share online. Such sharing doesn’t happen solely among the general populace; COVID-19 denial has made it into the halls of the United States Congress, giving it a thin veneer of legitimacy, accelerating its spread. All of this is further complicated when bad actors use intentional falsehoods to change population behavior via social media influence, whether for reasons of politics, economics, or a desire for chaos.

Of course, the rejection of the reality of emerging risks isn’t an entirely unfamiliar phenomenon. We have already become accustomed to crisis denial regarding slow-moving, hard-to-fully-grasp threats like anthropogenic global warming. A refusal to see the facts of climate change is a frustrating but pervasive phenomenon, and it often leads us to focus on that determined ignorance as the problem. Implicit in many of the communication strategies around climate change is the belief that, once its impacts are overwhelmingly visible—whether via superstorms, unprecedented heat waves, or rising sea levels—people will start to accept the science. We should now recognize that this cannot be assumed.

As awful as the pandemic has been, it has very effectively pulled the covers off of some unpleasant realities. If we ever needed confirmation that facts alone won’t change minds, we have it now. If we had any doubts that even the apocalypse would be politicized and made a partisan issue, those are gone. If we had hoped that in a major crisis empathy would prevail, well, here the outcome is a bit more mixed.

It’s unquestionably important to face the physical reality of an apocalyptic or near-apocalyptic event. At the same time, we need to recognize that this is not the entire battle. As has become clear in the push to “open up” amidst the COVID-19 crisis, the memetic virus is a powerful force, even as the biological virus spreads.

Oil price collapse & the crisis
Facing the ecosocial crisis: Is a socialist planning of the economy feasible?