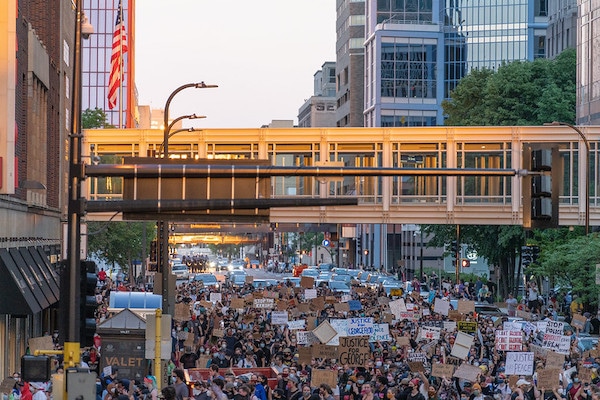 Chad Davis – Protest – Protesters gather in downtown Minneapolis. Unrest in Minneapolis over the May 25th death of George Floyd.

This weekend, hundreds of thousands of workers and youth will protest the police murder of George Floyd, not only in the United States, but in Australia, Canada, Britain, Germany, France, Belgium, Spain, Hungary, Brazil, South Korea and many other countries.

Demonstrations have already taken place this week in hundreds of towns and cities, in countries on every inhabited continent in the world.

In South and Central America, thousands of people protested in front of the Federal University of Paraná in Brazil. Others demonstrated outside the state government building in Rio de Janeiro. Hundreds have also protested in Mexico and demonstrations have been held in Bermuda and Argentina.

Australasia has seen dozens of protests, including of more than 3,000 people in Sydney, Australia, more than 2,000 in Perth and tens of thousands in Auckland, New Zealand. They carried banners that declared, “The government does not care! We the people must help each other!” and “Australia is not innocent.”

In Asia and the Middle East, demonstrations have been held in India, Japan, the Philippines, Turkey, Israel and Iran.

In Africa, rallies have been organised in Ghana, Kenya, Liberia, Nigeria and South Africa.

At least 19 towns and cities in Canada have seen protests, including many thousands in Halifax, Montreal, Ottawa, Toronto and Vancouver.

Across Europe, Germany saw thousands protest outside the U.S. embassy in Berlin and the consulate in Hamburg. Slogans included “Your Pain Is My Pain, Your Fight Is My Fight.” Thousands have protested in Amsterdam and Rotterdam in the Netherlands; in Athens, Greece; in Copenhagen, Denmark; Stockholm, Sweden; Helsinki, Finland; Oslo, Norway and Reykjavik, Iceland. Other demonstrations have been held in Italy, Belgium, Spain, Ireland, Poland, Lithuania, Slovakia and Switzerland.

The United Kingdom has witnessed at least 25 separate protests. Over 15,000 people gathered in Hyde Park on Wednesday and marched to the prime minister’s residence on Downing Street, carrying placards reading, “If you are neutral in situations of injustice you have chosen the side of the oppressor,” and, as in Australia, “The UK is not innocent.” In France, 5,000 marched in Montpellier and 25,000 people defied a ban to protest in Paris. A speaker at the rally announced, “What’s happening in the United States highlights what is happening today in France.”

Of extraordinary significance, in Austria, a massive 50,000 demonstrated in Vienna Thursday. If a similar percentage of the urban population protested in New York, this would equate to a rally of over 200,000 people.

The international outpouring of solidarity is animated by opposition to Donald Trump’s brutal repression of peaceful multi-ethnic protests. Their scale also indicates an initial recognition of the dangers posed to the American working class and billions throughout the world by Trump’s drive to establish a presidential dictatorship. Moreover, the working class in every country sees in the scenes playing out in the U.S. an echo of its own social conditions, dominated by extreme and growing levels of inequality, which dictate ever more fascistic forms of rule the world over.

In addition to the state violence in the US, Tuesday’s demonstration in Paris protested the death of French youth Adama Traoré, beaten and asphyxiated by police in 2016. It follows more than two years in which “yellow vest” protests against social inequality have been brutalised by the riot police of President Emmanuel Macron, the man who has sought to rehabilitate the Nazi collaborator Marshal Petain.

Brazilian workers are demonstrating against the wave of killings carried out by police in Rio de Janeiro’s favellas under the oversight of fascistic President Jair Bolsonaro.

German workers and youth have spent the past six years watching the unfolding of a conspiracy within the state and academia to rehabilitate the Third Reich, bring the fascist Alternative for Germany (AfD) to the fore and prepare a return to unrestrained imperialist militarism. Trump’s threat to designate protestors as “terrorists” follows the German state security service’s placing of the Sozialistische Gleichheitspartei on its extremism watchlist for the “crime” of conducting a fight against this fascist revanchism.

The global protests sparked by Floyd’s killing have also erupted nearly three months into a pandemic, which, due to the deliberate and criminal actions of the ruling class, continues to have a devastating impact on billions of workers and young people. Hundreds of thousands have died, and millions have lost their jobs, while trillions have been funnelled into the coffers of the major corporations by governments of the financial oligarchy. Now workers are being forced back to work in unsafe conditions on pain of poverty and starvation.

The police murder of George Floyd, and the daily scenes of unrestrained state violence against black, white and Hispanic youth have acted as a trigger event setting simmering class tensions alight.

At its May Day Rally last month, the WSWS drew attention to a concerned report by the leading imperialist think tank, the Centre for Strategic and International Studies (CSIS), which warned:

“We are living in an age of global mass protests that are historically unprecedented in frequency, scope and size… The coronavirus will likely suppress protests in the short term both due to government restrictions in urban areas and citizens’ own reluctance to expose themselves to large public gatherings. However, depending on the future course of this likely pandemic, government responses may themselves become another trigger of mass political protest.”

The WSWS and the International Committee have sought to politically alert the working class in anticipation of precisely such a re-eruption of the class struggle and to provide a revolutionary perspective and orientation.

The moment lockdowns were ended, the first act of murderous police violence in America triggered a social explosion. Even under conditions in which millions rightly fear an escalation in the spread of the coronavirus, “global mass protests” have returned, in united opposition to the brutality of the capitalist state.

The American media will give little or no indication of the international scope of these events, which testify to the real state of class relations and the real balance of forces in the U.S. and across the world. They prove that the American working class, now involved in a struggle that requires the removal of Trump, has immensely powerful allies. The fight against Trump, hated throughout the world as the thuggish personification of rule by the oligarchy, will find huge support in the working class and youth in every country entering into conflict with their own rulers.

Workers and young people must counter Trump’s offensive with the adoption of an internationalist program of struggle on which to remove Trump, Mike Pence and their co-conspirators from office. On this basis, a world movement of the working class will begin to take shape that will take on and defeat Trump’s plan to impose a police-military dictatorship and carry out the struggle for socialism.