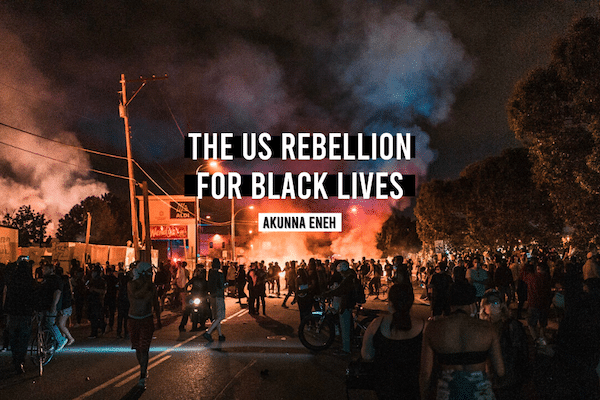 In this time, we witnessed wild-cat strikes, social-distanced pickets, car caravan protests and so on for increased health and safety measures on the job or against furloughs and layoffs. These worker-led actions exposed deplorable working conditions, the doubled hardship for workers of colour who were dying in from the virus in record numbers, and the lack of any shred of democracy–even to have a say over your own life–at work in the US.

The health crisis seemed to be dictating a new normal. And, there was discussion of re-opening up the economy that increased the anxiety of everyone I know.

By May 26, we’d all seen or heard about the video of George Floyd’s murder. Anger and horror was immediate, but I don’t think anyone would have expected the following seven days to become an open rebellion against state repression and racism.

COVID-19 had unveiled more of the inequality embedded in our system; but this new iteration of the Black Lives Matter movement is beginning to crystalize what the whole working class needs to do to defeat it.

George Floyd was a 46 year old Black man from Minneapolis, nicknamed the “gentle giant” for his kind nature and large frame by his family and friends.

On May 25, video of a white cop, Officer Derek Chauvin, pressing his knee into Floyd’s neck, eventually killing him, went viral. Three other police officers stood by and watched while bystanders yelled at Chauvin to stop. Floyd cried out several times that he couldn’t breathe.

As upsetting as these details are, murder and abuse by police officers and racist vigilantes is an everyday occurrence in Black America. Between 2013 and 2019, police in the United States killed 7,666 people and the number of Black people killed is disproportionate to other racial groups, about 25%. To put that in further context, the percentage of the U.S. population who are Black stands at roughly 12%.

In the weeks leading up to Floyd’s murder, news of other Black lives stolen filled the headlines. Ahmaud Arbery was killed in Georgia on Feb 20 while on a jog by two white men who were following him.

Breonna Taylor, an EMT (an essential worker for our current health crisis) was shot and killed in March in her own home in Kentucky when plain clothed officers essentially broke in, looking for someone who didn’t even live there.

Just two days after the world found about the murder of George Floyd, Tony McDade, a Black trans man, was killed in Florida by a yet-to-be identified police officer. The only story available is the police record, and there are many reasons to not find the report credible.

Of these cases, only Arbery’s provoked a widespread response, in the form of the #IrunwithMaud campaign, and even that seemed to quickly fade from national attention.

All the while, the intensity of racism under quarantine has not been lost on Black communities. Over 100,000 Americans have died from the virus, which is horrifying enough. But even more damning is the fact that over 20,000 Black Americans have died, making up 25% of the total death count. Or put more starkly, about 1 in 2,000 of the entire Black population in the U.S. has died of COVID-19.

Of the people in my life, a multiracial circle of friends, coworkers, and comrades, every person who I know to have died from coronavirus has been Black.

It’s difficult to explain the weight of this reality, knowing that health care disparities, our concentration in the service sector, in prisons, our rate of homelessness, unemployment, and much more make Black people more vulnerable to catching and spreading the virus.

The whole American working class has suffered since the 2008 recession, which has only been exacerbated by the total failure of a public health response in the U.S. to the coronavirus. What the pandemic has done for all of us living here is completely pull off the veil of stability, prosperity, and virtue in the richest country in the world, to expose a chaotic, unsustainable society with lethal racism at its heart.

Floyd’s murder broke the dam of pent up anger of the Black working class in particular. As Keeanga-Yamahtta Taylor succinctly puts it in a New York Times op-ed, the “simultaneous collapse of politics and governance has forced people to take to the streets–to the detriment of their health and the health of others–to demand the most basic necessities of life, including the right to be free of police harassment or murder.”

Three days into this international uprising against racism, Chauvin was arrested and charged with third degree murder. Another five days of continued and increased mobilization forced the state attorney general to increase his charge to second degree murder and to finally charge the other three officers with aiding and abetting murder.

Coming out of the previous BLM uprising, the main conclusion activists drew was that police departments needed to be reformed with civilian review boards, more anti-racist training, body cameras and perhaps the hiring of more people of colour directly from the community.

The racial disparities of the current health crisis and the ongoing assault on Black people by the police has put the failure of that approach into sharp relief.

Clarence Castile of Minnesota, who served on a task force convened by the state Attorney General to curb excessive use of force by police, lamented the reform work, telling the Washington Post:

We can come up with all the recommendations in the world. We can make all these new policies. But until people follow these policies, until people use these recommendations and are held accountable when they don’t, it ain’t going to matter. It’s just a lot of talk, a lot of jibber jabber, and here we go again.

Martin Luther King Jr.’s quote that “riots are the language of the unheard” is being shared more and more as a way of combating the idea that Black people are simply “looting” and recklessly destroying their own neighborhood. But this can have the effect of downplaying the agency of Black people. This is not a blind rage.

The idea that Black people are just destroying their own neighborhoods is laughable when you think about the widening wealth gap between white and Black families in this country and the gentrification that is displacing Black families.

Who feels like where they live still belongs to them?

And, looting a Target in a time when nearly 43 million Americans have filed for unemployment makes a whole lot of sense.

Protestors were maligned for burning down the police precinct where Chauvin and others worked. But, shouldn’t we destroy the tools the police use to carry their repression out?

The media and the mainstream politicians tried as hard as they could to malign the protesters as rioters, looters, and even outside agitators. Cities across the country, from Minneapolis, to Chicago to New York, enforced curfews, kettled protesters, and carried out mass arrests. The national guard has been called in across the United States to quell the protests.

But, the results have been clear. The protest movement is spreading and growing. The Governor of Minnesota had to eat his words about regaining control of the city after three days of rioting and protests grew around the country, and even internationally.

Multiracial sympathy and support for protests has been widespread. In fact, 64% of Americans support the protests around the country. And an impressive 54% believed the burning of the Minneapolis police station was justified.

Each municipality, each state, and clearly the country, relies on its repressive infrastructure to “run” society–or rather, maintain massive inequality and a lack of democracy.

In fact, in large cities like New York, more money is spent on the police than on Departments of Health, Homeless Services, Housing Preservation and Development, and Youth and Community Development combined.

When austerity is being argued for, there is nary a mention of cutting the police budget. This shows where the priorities of the system lie, and partially explains why the COVID-19 response has been a mess.

Resources that could go into a real public health system, or even a temporary campaign to get people tested and to educate people on coronavirus transmission, are overwhelmingly diverted to police departments. This country’s one tried and true response to crisis is state repression.

The systematic repression and dehumanization of Black people is the mechanism through which U.S. capital maintains its order. When that is exposed as the disgusting waste of human life and resources that it is, all the contradictions of life under capitalism are laid bare.

How does the richest country in the world not have any way to coordinate and centrally fund a national public health response to a highly contagious virus, but is able to coordinate police action across the country to repress peaceful protest?

The demand to defund the police is central to the rebellion. After a week of revolt, the Minneapolis school board voted to cut ties with the Minneapolis Police Department. Portland Public School superintendent just announced that armed police officers will no longer be in schools. Protests around the country are taking aim at local budgets and demanding to defund the police.

When Black people rise up to fight their oppression, working class people and other oppressed groups follow, across the country and around the world. From the abolition movement to the civil rights movements of the 60s and 70s, Black struggle has been a beacon in this way and has inspired people to fight for a revolution.

Today, I am reminded of Carribean socialist CLR James’ contribution to the U.S. socialist movement on the inherent revolutionary character of Black struggle in 1948. He talks about how Black voting rights, denial of housing, and segregation enlightens Blacks in a keen way to the lie of America as a democracy.

He also talks about the role of the Civil War and how through the leadership of Blacks fighting for their lives, the revolutionary potential for all working and landless poor was made clear to white abolitionists and Union soldiers. It’s an important read, but it is not just history.

Today in very different conditions we are seeing again that Black struggle pushes the envelope of what’s possible. James also emphasizes that Black struggle has dynamics of its own that are not strictly about class. While the liberation of Black people is crucial to the liberation of all people, Black political leadership on ground of any struggle, the knowledge Black individuals have of the way capitalist inequality is meted out to them, is key to our achieving socialism in the U.S. and thus around the world.

Black struggle has again and again advanced the struggle for economic equality and real democracy. They teach the rest of the class of the system’s real priorities that make police violence part and parcel of the capitalist system.

The dynamics of the current uprising may change drastically tomorrow. Putting my thoughts together while watching all of this unfold, while joining protests, while reconciling loss of life with the potential to win justice this time, I have reconsidered the lessons of this moment too many times to count.

Protests rage on and all of us on the side of liberation will continue to learn and reevaluate where we are in the struggle against capitalist violence. What I feel I can say now is that the BLM uprising this time signals the growth of an independent Black liberation struggle, led by Black people, with everyone from the youth calling demos on FB to the home health care aids and nurses going on strike for better workplace protection from coronavirus.

This struggle is already growing–in numbers of participants and in popular support. It is developing and supported by a young, multiracial radical movement to dismantle the racist police systems–and to fight for fundamental societal change.