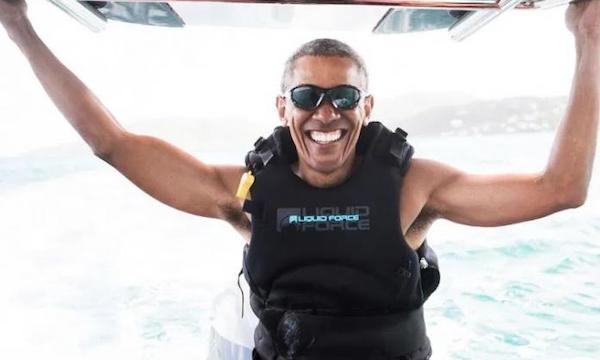 Barack Obama has offered some advice to the protesters flooding streets across the United States. Not that anyone asked him, mind you. But he was the First Black President™, so people better shut up and listen.

In an article published at Medium, he starts with a classic play–distinguishing between good and bad protesters. The good ones are the ones who are motivated by horror at the inequality and injustice that plague American capitalism. Their grievances are just, and their demands should be respected. The bad ones are those who break a few windows, loot a department store or two, maybe even burn down the odd building. “Let’s not excuse violence, or rationalize it, or participate in it”, Obama says.

You could reply that violence–usually as self-defence, but not always–has been part of every mass movement in history. You could point to national liberation struggles, the U.S. civil war, the anti-apartheid movement in South Africa, or even the small-scale confrontations that happen on most union picket lines. You could also point to the structural violence of the status quo, which has killed 100,000 Americans in just a few months–disproportionately Black and Brown folk–because the U.S. ruling class cares more about dollars than lives.

Or you could just scream with rage at the hypocrisy.

Barack Obama is a mass murderer. In just the final year of his presidency, he authorised more than 26,000 airstrikes, overwhelmingly in impoverished countries such as Pakistan, Libya, Somalia and Yemen. He is also the guy that made drone use an artform, deploying them 10 times more frequently than his predecessor, George W. Bush. He loved these killing machines so much that he actually made a joke about using them on his own kids.

Obama spent eight years as commander-in-chief of a military involved in multiple illegal wars. He was responsible for tens of thousands of deaths across the Middle East and North Africa. He backed Israel’s deadly assaults on the Gaza strip, which killed more than 1,000 people on three separate occasions. “Israel has the right to self-defence”, he said, despite the unprecedented massacre of Palestinian civilians.

In response to the Black Lives Matter movement that erupted under his watch, Obama defended police by pointing out that the problems they face dealing with African American communities are beyond their scope.

Obama made it clear that he’s prepared to participate in, rationalise and excuse any number of horrific acts of violence and repression. What’s important to him is not peace in general, but peace for the ruling class.

It’s why the other main goal of his article is to convince activists to abandon the streets–because mass, collective action opens the possibility for achieving real change. Instead, he offers the alternative of electoral work, which is where real change supposedly gets enacted. If this demobilising argument is accepted–and it is the dominant one under capitalism–the requirements of fundraising, “coalition building” and parliamentary arithmetic will do the work of taming young radicals.

Obama, and the ruling class he represented faithfully, are terrified of this enormous multiracial rebellion. They’re worried that if the movement continues maybe society will have to change in a more fundamental way than just electing the Next Black Lawmaker.

To avoid that, they’re using every trick in the book to try to shut it down, including novel scenes of police officers discovering how to kneel without using a Black man’s neck as a cushion. None of it worked, so now we’ve got Obama the war criminal offering tips on non-violence.

African American scholar and activist Cornell West gave a cracking speech on CNN last week, in which he attacked neoliberal Democrats and the specific strategy of getting “black faces in high places”. That includes many hundreds of Democratic sheriffs involved in the racist law enforcement apparatus, mayors who drive people out of their communities, congressional representatives who vote against improving social services, and yes, the first black president who did all that and more. Fuck them all.