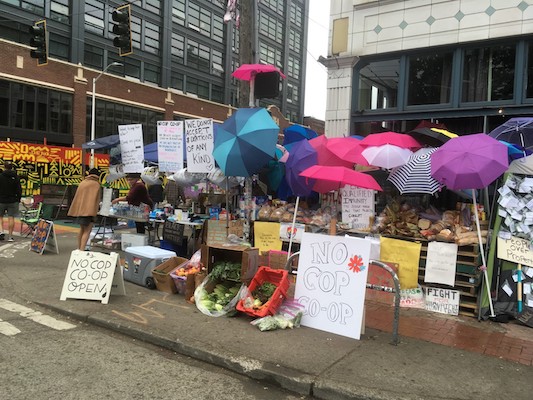 President Donald Trump from his New Jersey private golf club tweeted this past Friday morning June 12, that “The terrorists burn and pillage our cities.” He was referring to demonstrators occupying three blocks along a single street, in Seattle’s most culturally active neighborhood. Trump demanded that the mayor and governor, “Must end this Seattle takeover now!” Or else he would call in the army.

What was he talking about?

This national threat began on Sunday June 7, when a small section of the Capitol Hill’s business district (known as the Pike-Pine Corridor) saw demonstrations outside one of Seattle’s five precinct stations. Like other demonstrations held around the nation for over a week, people of all ages and races were in the streets supporting Black Lives Matter’s demand to erase racist policing, opening up the move to either defund or reduce police departments’ budgets.

That Sunday the police said on Twitter that some people had thrown projectiles and fireworks at officers, although they did not provide any evidence beyond one what appeared to be a single candle. Accordingly, they responded with pepper spray, blast balls and tear gas, which the mayor had previously promised to not use for the next 30 days. But protecting themselves from thrown projectiles triggered an exclusion to that prohibition. Councilmembers who had attended as witnesses told me that there did not appear to be any threat to the police officers’ safety and the police over-reacted to the chants from the crowd, who did not wish to be pushed away from the East Precinct police station.

The only terror activity that occurred was when a civilian driver headed his car into the demonstrators. An unarmed twenty-seven-year-old Black man reached into the open window of the car as it was passing, grabbed the steering wheel and halted it from hitting people. The driver pulled out a gun, shot and wounded the man as the car came to a stop. The driver then left the car with gun in hand, walked over to a line of police standing nearby, surrendered himself and was arrested.

The next day, on Monday June 8, the police emptied the police station of guns, files and critical equipment as they prepared to no longer defend the building. They apparently thought it would be destroyed by the demonstrators, who were mostly residents of the East Precinct, some of whom live in multi-million-dollar mansions as well as in low-income social housing projects. The precinct also has the highest concentration of apartments and small independent retail businesses in Seattle. Historically it has been the city’s most liberal council district; and since 2013 has repeatedly elected a Socialist Alternative Party member to the City Council, over the opposition of much better funded business-community candidates.

By Tuesday June 9, a loose conglomeration of demonstrators came together to use the former police street barricades to close off Pine street for a length of three blocks. Although Trump tweeted: “These people are not going to occupy a major portion of a great city,” it is not even part of downtown. It is a two-lane road lined with small neighborhood businesses and a park. The area came to be called by the occupants as CHAZ, the Capitol Hill Autonomous Zone, and they put up a website.

However, the local conservative radio host Jason Rantz, interviewed by Fox News commentator Tucker Carlson on Thursday June 11, said it was a violent place. And that similar occupations to the one taking place in Seattle could happen in cities across the U.S. if the authorities allow it. Although Carlson began the interview saying that Rantz was one of the few people he knew who had visited CHAZ, Rantz basically admitted that he had not been inside when he replied to Carlson’s question of what he saw inside CHAZ, he said, “Right now, it’s too violent for us to go in.” He provided no examples of what kind of violence he was referring to.

The next day, Friday June 12, having been a prior resident for decades in that neighborhood, I went to see what dangers lurked in a community without police patrols.

I casually walked pass by the CHAZ street barrier and the three community sentries, who sat off a way behind it, talking to each other. No conversation or ID needed. It was a wide-open passage, where I discovered that CHAZ had become a bit of a tourist destination for curious Seattle residents taking photos of all the posters, graffiti and the one-block colorful mural painted on Pine Street spelling out BLACK LIVES MATTER.

The businesses on the street were still open as was the park when I visited. There was no sign of smashed windows or burnt buildings. There had been no looting and there was no violence of any sort occurring.

There was a “No Cop Co-Op” covered stand offering free fruit, vegetables, snacks, umbrellas, hand sanitizer and water set up in the middle of their occupied territory. There was also a covered truck converted into a People’s Community Clinic with its own emergency medical team. There were many memorials to victims of police violence, along with were other little touches of an emerging community; an open-air conversation café with sofas, a small basketball court, an improvised smoking corner, and a private food stall, the Dirty Dog hotdog stand, among other things.

One of the most ambitious undertakings was begun by Marcus Henderson, who helped create the community gardens that occupy part of the adjacent Cal Anderson Park. Henderson is typical of educated citizens who understand that disruptive moments like CHAZ offer a positive opportunity. He had the knowledge for sustainable gardening from obtaining an Energy Resources Engineering degree from Stanford University and a master’s degree in Sustainability in the Urban Environment. Seattle Mayor Jenny Durkan visited the gardens and met with Henderson the day after Trump had tweeted “Take back your city NOW. If you don’t do it, I will.” In response, Durkan accused Trump of purposefully distorting the activities in CHAZ to fit his tough law and order mantra.

Trump may have also been watching Fox News, which was engaged in the same practice. Thanks to an article by Seattle Times reporter Jim Brunner, it came to light that Fox ran digitally altered images in coverage of CHAZ. Three separate photos were photo-shopped to create an image of a heavily armed man guarding the entrance to the zone. Another image, with a caption of CRAZY TOWN blazoned over a portion of it, showed huge flames pouring out of a building with a demonstrator running away. But it was not Seattle, the photo was from a May 30 protest in St. Paul, Minnesota.

Fox and other outlets also jumped on a comment by a Seattle police commander suggesting protesters were extorting payments from businesses within CHAZ. Seattle police Chief Carmen Best had to refute that statement, saying that it was based on rumor and social media. “We haven’t had any formal reports of this occurring,” she said.

Best also said that she did not want to abandon the precinct station but had to because of pressure. However, she did not say the order came from Mayor Durkan, who did not say she made the decision. I got the impression that internal pressure came from the police union’s members to leave the precinct. This was particularly true when some councilmembers asked that the hard surface street barriers be removed that the police had set up to separate the demonstrators from standing on the street next to their police station.

The police attitude that their station might be torched and that chaos and disorder would follow in the neighborhood by allowing protestors to peacefully demonstrate so close to them, was bolstered not only by the unsubstantiated comment from the police commander but also from comments made by a local police officer and the union’s president.

A resident of one of the nearby apartment buildings, whom I know very well, told me of her interactions with a police officer. She was standing in front of her building on Monday June 8 at noon asking people what was going on. A police officer came by and announced, “We are all pulling out, and you’re all going to be on your own. We are not coming back in and you are not going to get help and bad elements will come in.” Then he added,

And who would want to work in Seattle [as police]?

On the same day, June 12, that I visited CHAZ, Michael Solan, president of the Seattle Police Officers Guild, told Fox News “This is the closest I’ve ever seen our country, let alone the city here, to becoming a lawless state.” It would lead one to believe that the police union had lost faith in receiving political cover for their use of excessive force, if the city council and mayor were to allow protestors so close to their precinct station. Police officers in Seattle are not allowed to strike, but they may have actually adopted an old fashion factory “walk-out” by letting the police chief know that they could no longer execute their usual police practices if they remained there.

The most recent turn of events came in an interview on Saturday, June 13, where a person who claimed that he represented the Seattle Black Lives Matter group, said that the area popularized by the title CHAZ was not what their group was using to describe the street space that has been controlled by demonstrators since the police left their precinct station. They don’t know who came up with that name and haven’t meet anyone representing them. That unknown group declared the name CHAZ and then spray painted the CHAZ slogans all around the area. Instead BLM is calling this zone CHOP–Capitol Hill Organizing Project. They posted a tweet: Black Lives Matter @djbsqrd “WE ARE #CHOP not #CHAZ stop spilling lies and spreading this narrative of being autonomous”

The future of this urban resistance project, initiated by the Black Lives Matter movement, still has to be played out. Organizers continue to push for their objectives, which are posted on the CHAZ website. Talks and open-mike discussions occur regularly in large outside public forums on the purpose of this unique effort. Overall, observers and participants will need to continue thinking about how claiming a portion of public space for an underserved and discriminated community can initiate effective social and political change, and not perpetuate the status quo or ignite a right-wing backlash that pursues further repressive policies.