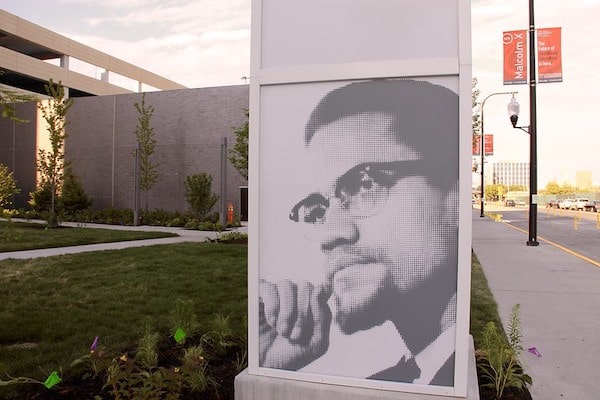 Malcolm X was a civil rights leader, a spokesperson for the Nation of Islam, and a leading black nationalist during the early 1960’s. Viewing integration as an illusory solution to the problems of black Americans, Malcolm X advocated self-reliance, black pride, and unity. Malcolm’s message became popular among Northern blacks as the Civil Rights movement failed to alleviate problems such as poverty, joblessness, police brutality, and de facto segregation. Although many Northern whites felt uncomfortable confronting racial inequities close to home, conditions for African Americans living in Northern and Western cities rivaled those of the South. In 1962 the Los Angeles Police Department, notorious in the Watts section of L.A. for harassing and brutalizing black youth, targeted the Nation of Islam in an act of violence. Malcolm X spoke out about the incident on WBAI radio.

ELMAN: Malcolm X, I wonder if you can tell me very briefly what took place in Los Angeles? You mentioned earlier on the evening that there was police brutality and there was atrocity committed. Would you explain what the incident was?

MALCOLM X: There was police brutality and there was atrocity, and the press was just as atrocious as the police. Because they helped the police to cover it up by propagating a false image across the country, that there was a blazing gun battle which involved Muslims and police shooting at each other. And everyone who know Muslims knows that Muslims don’t even carry a finger nail file, much less carry guns. So that the blazing gun battle that the Los Angeles papers were writing about actually consisted of policemen’s guns who were blazing away at unarmed Negroes, so-called Negroes, whom they murdered and shot down in cold blood. And how it happened, according to our information

About 11:15 last Friday night, after the meeting was over, two brothers who worked for a dry cleaners had some clothing in their car that they were getting to another brother, and two white policemen puled up to question them, and–in other words, he probably thought that they were burglars or something or thieves. And when he stopped to question them, they stopped and began to give him whatever information he asked. But he got fresh with them, told them to get up on the curb, which they did, and one brother in explaining it was talking with his hands, and the officer told him, don’t talk with his hands.

So he took one hand and held it down. So he brought the other hand, and he was still talking, and the officer grabbed it and started twisting it, and from the information that we’ve been able to gather, the other brother moved in to help him. And when he moved in to help him, the other policeman moved in and a struggle took place. And while they were struggling with each other, a dance hall cop, a cop who is the officer on duty in a dance hall, saw the struggle and he started shooting.

This caused an alarm to go out to all police cars, and instead of them coming and converging on the place where the incident was occurring, they went straight to our house of worship, our mosque, which was a block away. And when they got to the mosque, they drew up with their guns drawn and shooting. They were shooting the bullets, not in the air but at the mosque when they pulled up. And the secretary of the mosque, the one who was shot down by them, by being the official, he went up and asked the police what did they want. And it was while he was asking them what did they want that they shot him through the heart. And when he fell to the sidewalk, they beat him in his head and handcuffed him and left him laying there on the sidewalk for 45 minutes. . .

ELMAN: Do you welcome an investigation of the matter?

MALCOLM X: The matter should be investigated. The matter should be investigated by the Federal Bureau of Investigation. What do they look like, running all over this country investigating things that are of no consequence, and they haven’t got sense enough to go into Los Angeles and investigate the Gestapo tactics of the police department out there? What do they look like condemning Eichman for what he did in Germany or the Nazis for what they did in Germany, and you’ve got some Gestapo tactics being practiced by the police department in this country against 20 million black people, second class citizens, day in and day out–not only down South but up North. Los Angeles isn’t down South. Los Angeles isn’t in Mississippi. Los Angeles is in the state of California, which produced Earl Warren, the Chief Justice of the Supreme Court–and Richard Nixon, the man who was Vice President of this country for some eight or nine years and who wants to run for President again.