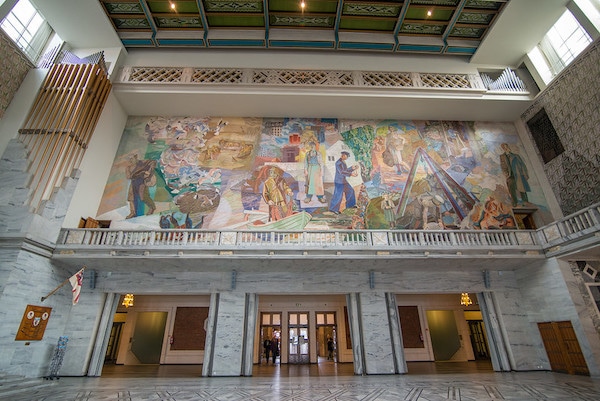 Oslo City Hall – The place where the Nobel Peace Prize is presented Oslo City Hall (Norwegian: Oslo rådhus) houses the city council, city administration, and art studios and galleries. The construction started in 1931, but was paused by the outbreak of World War II, before the official inauguration in 1950. Its characteristic architecture, artworks and the Nobel Peace Prize ceremony, held on 10 December, makes it one of Oslo’s most famous buildings. It was designed by Arnstein Arneberg and Magnus Poulsson. The roof of the eastern tower has a 49-bell carillon which plays every hour. It is situated in Pipervika in central downtown Oslo. The area was completely renovated and rebuilt to make room for the new city hall, back in the late 1920s. In June 2005 it was named Oslo’s “Structure of the Century” [Wikipedia.org]

A few weeks ago, I was talking to Noam Chomsky about the state of the world. At one point, Noam smiled and said that he is not aware of any German doctors in Italy, even though both countries are in the European Union; instead, Cuban and Chinese doctors went to Italy to help the Italians fight the global pandemic.

Little wonder that there is a petition in circulation to award the Cuban medical workers with the Nobel Peace Prize. The Cuban Ministry of Public Health rapidly mobilized its medical teams—notably the Henry Reeve Brigade—to take their considerable skills to a range of countries, from Andorra to Venezuela.

The Brigade received the Dr. Lee Jong-Wook Memorial Prize for Public Health from the World Health Organization (WHO) in 2017 for its work against the Ebola epidemic in West Africa. That award was received by Dr. Felix Baez, who had worked in Pakistan after the earthquake in 2005 and then went to Sierra Leone in October 2014 to fight Ebola; Dr. Baez contracted Ebola, went to recover in Switzerland and Cuba, and then returned to Sierra Leone to complete his mission.

The roots of Cuban medical internationalism go right to the start of the Cuban Revolution in 1959. Even though doctors left the country after the revolution, the Cuban people responded valiantly in response to an earthquake in Valdivia, Chile, in May 1960; a Cuban emergency medical brigade arrived in Chile and set up six rural field hospitals. This was the start of a process that would include Cuban medical assistance to the Algerian, Angolan, Nicaraguan, and Vietnamese liberation wars, as well as Cuban medical training for students from across the world.

Key to Cuba’s medical internationalism is to train medical personnel across the world, in addition to sending Cuban doctors and nurses overseas. Since 2005, the Latin American School of Medicine based in Havana has trained more than 29,000 doctors from more than 100 countries. Many of these doctors are now on the frontlines of the fight against COVID-19 across the world. For example, Dr. Patrick Delly—director of Haiti’s National Laboratory of Epidemiology—is leading the struggle to break the chain of infection in Haiti.

The People’s Republic of China first sent a medical team outside its borders in 1963, when 24 Chinese medical workers arrived in Algeria to assist the new country. Since then, China has built hospitals and medical centers in Algeria and has treated almost 2 million patients in that country. Since mid-May, a team of Chinese medical specialists with expertise in treating COVID-19 has been working in Algeria.

A few years ago, on the train from Fez to Rabat, I met a team of Chinese doctors who had been stationed in Morocco. These doctors were part of the 165th Chinese medical mission and had been at work in the public hospitals in the Moroccan mountainous towns of Chefchaouen and Taza. They told me that the Chinese and Moroccan authorities were in the process of setting up a Chinese-Moroccan Center for Traditional Medicine in Casablanca. During the current pandemic, China sent several flights with medical equipment to Morocco for the fight against the pandemic; Chinese medical personnel, already in Morocco on their mission, continue to work to contain COVID-19.

China, having gained important experience in its own fight against the virus and the disease, has now sent experts and medical teams to countries across the world from Iran to Burkina Faso to Venezuela. In Sudan, for instance, the 35th Chinese medical mission held an information forum at the Omdurman Friendship Hospital, where Zhou Lin—head of the Chinese team—urged the medical staff to protect themselves from the disease and to teach people about how to prevent spreading the virus. Practical advice came alongside the donation of 400,000 surgical masks and other equipment.

One key area of solidarity is China’s increased involvement on behalf of the Palestinian people. A medical expert team assembled by China’s National Health Commission arrived in Palestine on June 11. Hua Chunying, of the Chinese Foreign Ministry, said that the team will remain in Palestine for one week and will provide expertise on “epidemic control, clinical diagnosis, and treatment and lab tests.” They come just as China contributed $1 million to UNRWA, the UN agency that works to provide basic services to Palestinians.

On January 1, 2020, just as the current outbreak developed, China and Cuba inaugurated the China-Cuba Biotechnology Joint Innovation Center in Hunan Province. This collaboration goes back almost two decades, when the countries set up the Changchun Heber Biological Technology Ltd. in Changchun (Jilin Province, China) in 2003. The Interferon alpha 2B (IFNrec), one of the key drugs used in the fight against COVID-19, is also manufactured by this company. The drug had been first developed in 1981 to tackled dengue fever in Cuba but has since then been used in the struggle against HIV-AIDS, hepatitis B and C, as well as respiratory papillomatosis. This drug was widely used—alongside traditional Chinese medicine—to treat patients in China with COVID-19.

Cuba’s fight against COVID-19 on the island has been exemplary, despite the U.S.-enforced blockade. China sent important donations to the island, including protective clothing, surgical masks, and infrared thermometers; some of these important supplies came from the government, but others came from public sector entities such as the Zhengzhou Yutong Bus Company—one of the world’s largest bus makers.

It is small-minded of people like U.S. President Donald Trump and Brazilian President Jair Bolsonaro to ignore their own incompetence in dealing with the disease and instead point fingers at others. Trump has made it a habit of blaming China; Bolsonaro’s son—Rodrigo—followed Trump in tweeting that the Chinese Communist Party is to blame for the virus. These governments have taken refuge in another atrocious virus—that of xenophobia (in particular, sinophobia).

China and Cuba, on the other hand, have—like other socialist countries—taken to heart the WHO slogan, “solidarity, not stigma.” Deng Boqing, the vice chairman of China International Development Cooperation Agency, said, “the grace of dripping water should be reciprocated by a gushing spring.” What he meant was that China’s response to other countries will not be measured by what they have done for China (dripping water) but by what these countries need (gushing spring); this is the old Marxist idea of giving what you can and taking what you need. China, Deng Boqing said, follows the “principle of doing what we can and trying our best.”