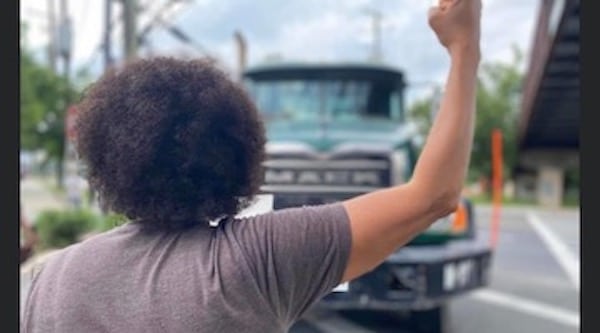 How Do You Spell Desecration of African Burials?: “Nigger!”

Much of the nation may be repudiating white supremacy, but not Montgomery County, Maryland, which is paving over sacred  Black ground in an attempt to bury its own racist history.

The treatment which Macedonia Baptist Church have received as they attempt to uphold the dignity of their sacred space, in my professional opinion, is simply another spelling of the n-word, as those who believe everything belongs to them attempt to have their way over the blacks they dismiss. – Dr. Michael Blakey, Professor of Anthropology, The College of William and Mary – Scientific Director, New York Burial Ground Project, NY.

On Tuesday, June 23rd, Bethesda Self-Storage Partners, the so-called owners of the Black bodies that lie in Moses African Cemetery, called Montgomery County police on peaceful protesters who refused to allow concrete trucks to pour their “final solution” on the remains of Africans buried in Moses African Cemetery. Arriving shortly after Montgomery County police came the federal Secret Service and U.S. Park Police. Moses African Cemetery’s sacred sanctuary – a resting place for African bodies that had been routinely tortured, raped, murdered and worked to death–is among the largest mass graves in the United States.  Moses is now in CODE RED: the highest warning for extinction.

All of these facts are now routinely ignored by the current county executive, Marc Elrich. He is the latest in a long lineup of officials whose dirty hands perpetuate the county’s sordid history of human trafficking, sexual predation and pedophilia that was rampant since the county’s inception in 1776— a year hallowed in white supremacist history, with its white supremacist Founding Father pedophiles.

Moses is the burial ground where little girls, kidnapped/enslaved from their homes in Africa were brought to be used in Bethesda, Maryland in the most violent, vile and depraved European industrial-scale sex trafficking operations.

With the end of the European Human Trafficking, most commonly called the Trans-Atlantic Slave Trade, “little girls” were forced into breeding to supply the next generation of Africans to be worked and raped to death in the Deep South. The bodies of those “little girls,” many of who bled out in childbirth, are in Moses African Cemetery. In fact, one archaeologist calls Moses an international site of genocide. Montgomery County, Maryland, unable to stand its own stench, tries to pave over the odor. But, our ancestors will not lie in peace, but rest in power.

The community has been confined to the back of the bus.  One must go to the parking lot of McDonalds to view the burial ground with its scattered pieces of “light-colored elongated material consistent with skeletal material.” These materials may be our ancestors.

If Mr. Elrich maintains his approval of the genocide still underway at Moses, he would do well to name this facility “Bethesda Self Storage and Mausoleum.”

Think of the marketing advantages that would allow: They could name each “storage space” a crypt after a savaged black person—say, a little black girl who was forced into breeding by the age of 12–and on Halloween they could host haunted house parties where, for a nominal fee attendees could dress up in period costumes as white “slave owners” and reenact the merriments, complete with little burlap sacks they could put over their own little Karens while they pretended they were being raped.

Because, ultimately, that is what this is all about: white profit and the proliferation of white supremacy.

It is the nation-state that owns the Black body–today as before the 13th Amendment.  The State chokes, rapes, murders, decides not to knock, surveils, lynches, kidnaps, incarcerates, zones, interferes with voting privileges, special immunizes murderous police and lackey district attorneys, and desecrates Black bodies because it, and it alone, owns Black bodies–dead or alive. This is why a private business, blessed by Montgomery County, called the police when Black people showed up to claim ownership of their ancestors, their history, their very place on earth.

A young Black man was accosted by the U.S. Park police for having tapped his knuckles on the police cruiser.  The officer jumped out of the car, without a face covering, and yelled, expelling millions of possible COVID cells, “Get the fuck out of my way I have official business here!” This is the depth of white contempt for Black people.

County Executive Marc Elrich, responding to our demand to stop the desecration and genocidal destruction of Moses on June 17th, wrote:

The property owner has hired a firm to do archaeological monitoring at the site per the instructions above. They have submitted two reports about their monitoring and have not yet detected human remains or funerary objects. I spoke with the project manager at the firm, and he explained that the work had not yet reached the subsoil; they had only been digging out the fill and looking at the materials. He said that there was no evidence of human remains.

One will note, that the County Executive consulted the white “property owner” and considered his statement as unbiased and credible as opposed to consulting the descendant Black community. There was never consideration that there might be a conflict of interest for the business to admit that human remains had been found. Afterall, even a corrupt County would have to shut down this multi-million dollar operation in the face of a truthful reporting of skeletal remains!

Elrich, in this pathetic narrative fails to disclose that the Planning Department provided Bethesda Self-Storage with a “sweet heart” deal that included a land swap, in exchange for allowing the Self-storage to “self-police” itself in reporting any evidence human remains–and that was just the beginning.

There are no archaeologists on site to identify human remains. That’s why the business and the County have locked out the descendant community. The goal for the County and the Self- Storage Company is to pour concrete as quickly as possible to cover-up the heinous crimes against African people. That is why we placed our bodies in front of concrete trucks to prevent this travesty of justice.

This is Montgomery County’s dog whistle now that they can no longer get away with overtly referring to African-Americans as Niggers! This level of disrespect and disregard of Black people is epidemic and, as we found out in the case of George Floyd and hundreds of others, fatal. People rising up and asserting their humanity is the only antidote for structural white supremacy.

Thankfully, the most highly regarded and esteemed anthropologist, Dr. Michael Blakey, National Endowment for the Humanities Professor of Anthropology at William and Mary, has voiced his professional outrage of the racist attacks by Montgomery County and the developer who have refused to provide the descendant community the ability to “verify” possible human remains, both skeletal and biomass, that have become available as a result of the desecration. Dr. Blakey writing to Maryland government officials, urging them to:

Stop construction on the Moses Cemetery

The photograph I was shown on June 25th taken by Tammy Hilburn shows fragments of light-colored elongated material consistent with skeletal material, but is not currently verifiable as such.  Also, a suspicious flagged area of possibly organically rich soil (a unique area of vegetation is growing there) recently covered with gravel, could represent a burial… There is no reason for public confidence in the County’s reliability given what I know to be a history of deaf intransigence on the County’s part relative to a sincerely-expressed desire to protect an ancestral sacred space.

Dr. Blakey concludes his letter to the State of Maryland by stating:

The treatment which Macedonia Baptist Church members  have received as they attempt to uphold the dignity of their sacred space, in my professional opinion, is simply another spelling of the n-word, as those who believe everything belongs to them attempt to have their way over the blacks they dismiss.

There is a strong possibility, based on photographic review by African American stakeholders of site disturbance at the location in question that burials are being destroyed by the current activity at the site of the county-permitted project for Bethesda Self Storage Partners…

Moses is a war trophy: a symbol of white conquest of Africa and its people. Our bones are to be used as ornaments, as keepsakes to be worn around the conqueror’s necks and adorn their homes, like Nat Turner’s skin that was used for lamp shades. Moses’ annihilation is a dogwhistle monument to white supremacy, just as the statues of Robert E. Lee, Washington Monument, Jefferson Memorial and so many others.

If reading the above has made you absolutely ill, please act before its too late:

Stop the genocide on Moses African Cemetery, return that land to its rightful owner–Macedonia Baptist Church!

Dr. Marsha Adebayo is the author of the Pulitzer Prize nominated: No FEAR: A Whistleblowers Triumph over Corruption and Retaliation at the EPA. She worked at the EPA for 18 years and blew the whistle on a U.S. multinational corporation that endangered South African vanadium mine workers. Marsha’s successful lawsuit led to the introduction and passage of the first civil rights and whistleblower law of the 21st century: the Notification of Federal Employees Anti-discrimination and Retaliation Act of 2002 (No FEAR Act). Marsha was inducted into the Maryland Women’s Hall of Fame, March 2017. Currently, she is working to stop HOC from its continue desecration of an African burial ground in Bethesda, Maryland.