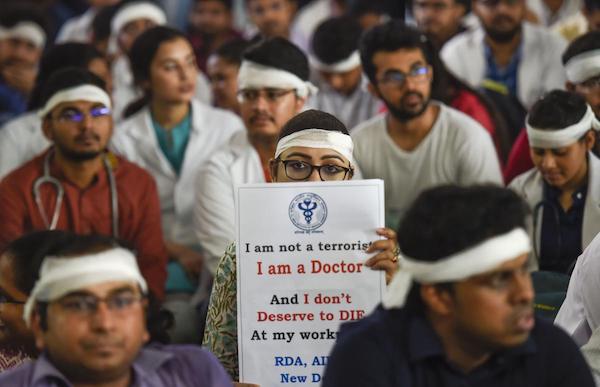 DD Kosambi uses a telling example to illustrate the crisis of Indian feudalism: at the third Battle of Panipat in 1761, the troops on oneside had not had enough to eat, while the troops on the other side just managed to assuage hunger by looting villages in the neighbourhood; neither side in short had arranged provisions for its troops. Likewise the crisis of Indian capitalism is tellingly illustrated by a simple fact: in the midst of this dreadful pandemic, the medical staff in several hospitals in the nation’s capital has not even been paid its regular salary for sometime.

But this incident illustrates not just the crisis but also the general nature of Indian capitalism. To see this, let us go back a little in time. Even before the pandemic, and even before the economic crisis hit India with virulence, the country had a healthcare system that was undoubtedly among the worst in the world; and this was so notwithstanding all the hullabaloo about India being an “emerging economic superpower”.

True, international statistics, gathered from national data of varying quality, are always somewhat problematical; but there can be little doubt about the validity of the conclusion that the total health expenditure as a percentage of GDP in India is among the lowest of all the countries in the world. It is about the same as for South Asia as a whole (3.46 per cent); but this is because of its own weight in South Asia and also because both Bangladesh and Pakistan are below it. In the case of Bangladesh however we must remember that drug prices there are kept low by official policy, so that a lower figure for health expenditure relative to GDP does not necessarily mean a worse healthcare scenario compared to India.

Significantly, the figure for total health expenditure as a percentage of GDP for Cuba (11.74 per cent) was among the highest in the world, and exceeded those of the UK (9.63 per cent), Germany (11.25 per cent) and France (11.31 per cent). Among the advanced capitalist countries it was only the U.S. which had a distinctly higher percentage (17.06) than Cuba; but as is well-known, despite high health expenditure, the U.S. is ill-served in the matter of healthcare because it relies on the health insurance route where private profiteering both by hospitals and insurance companies is rampant. This is unlike the European countries and Cuba which rely on public provisioning of healthcare.

This has actually been happening in India. A major reason for increased peasant indebtedness, which underlies the upsurge in peasant suicides, is the sharp increase in healthcare costs for the people. This has occurred because of the greater privatisation of healthcare during the neoliberal regime.

For all these reasons, public expenditure on healthcare as a percentage of GDP is a better index of the health-welfare of a people than total health expenditure as a percentage of GDP. And on this criterion, India’s performance is even more abysmal. Public health expenditure as a percentage of GDP in India is just over one per cent, which is again among the lowest in the world. In 2017-18 for instance it was 1.17 per cent, which was much lower than the figure for even the “lower income countries” (for whom as a group it was 1.57 per cent). For the European Union as a whole, it was about 7 per cent: the European countries, as noted above, rely predominantly on publicly funded healthcare which constitutes the crux of the Welfare State.

India’s public health expenditure as a percentage of GDP is even lower than that of our neighbouring countries such as Sri Lanka, Bhutan and Nepal, some of whom happen to be much poorer than India in terms of per capita income.

There is another reason why one might expect a rise in the share of health expenditure in GDP. Since the rate of growth of employment under the neoliberal regime has not been large enough to reduce the relative size of the labour reserves in the total work-force, the spontaneous tendency has been for the real wages of employed workers to remain tied to a subsistence level; and since the proportion of unemployment to employment has increased because of the larger relative labour reserves, there has been an absolute worsening of the average condition of the working people, even as income inequality has increased substantially owing to the rise in labour productivity.

With this spontaneous increase in inequality and absolute poverty, one may expect the State to play a mitigating role by enlarging the share of public health expenditure in GDP. One may in short expect State action to offset partially the spontaneous tendency under neoliberalism towards a worsening of the lot of the working people. But in fact we find the exact opposite: the actions of the State have been to compound this worsening by making healthcare even more expensive by holding back on public healthcare provision.

This highlights the odious nature of Indian capitalism where State action, far from mitigating the oppression spontaneously inflicted by the system, actually compounds it wilfully. Not paying the salaries of the staff in government medical facilities is in keeping with this odiousness.