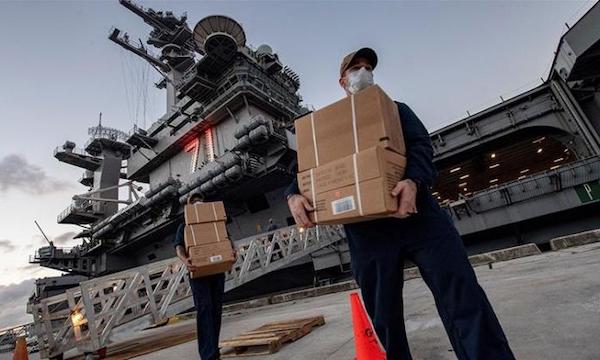 Sailors on the USS Theodore Roosevelt.

In March, COVID-19 breached the considerable defences of the USS Theodore Roosevelt. The colossal nuclear-powered aircraft carrier, which has played a central role in defending the U.S.’s imperialist interests over the past three decades, proved no match for the virus, which infected more than 1,000 crew members in a matter of days.

Unlike other supposed threats to national security, COVID-19 cannot be eliminated by air strikes. Pandemics have little regard for national borders or military firepower. In the face of this threat, some world leaders have made a show of internationalist cooperation. In the lead-up to a virtual summit on 4 May hosted by the European Union, the European Council issued a statement calling for the development and production of a vaccine “by the world, for the whole world”.

“None of us is immune to the pandemic and none of us can beat the virus alone”, it read.

The $12.5 billion raised at the summit by nations such as Australia, Canada, France, Germany, Japan and Spain, will be used to accelerate the development and equitable distribution of a COVID-19 vaccine. Yet the conspicuous absence of pledges from the U.S. and China exposed the speciousness of this solidarity.

Both U.S. secretary of state Mike Pompeo and Chinese foreign ministry spokesperson Zhao Lijian have spent the past month undermining the possibility of international cooperation.

The Trump administration has accused the Chinese government of launching cyberattacks in order to pilfer information from U.S. vaccine researchers. “China has long engaged in the theft of biomedical research, and COVID-19 research is the field’s holy grail right now”, said John Demers, U.S. assistant attorney general for national security.

While its commercial value is of importance, the geopolitical significance of being the first to develop a treatment or vaccine means the Chinese will try to use every tool–both cyber intrusions and insiders–to get it.

For its part, China has been using its economic power to retaliate against countries, including Australia, that have joined calls for an inquiry into the origins of the virus and more openness from the Chinese regime about its nature.

The COVID-19 arms race initiated by the U.S. and China highlights that behind the niceties of global summits attended by middling powers, the reality is that the hunt for a COVID-19 vaccine is a war of all against all.

As early as March, German officials intervened in order to prevent the Trump administration from luring local biotech company CureVac AG into relocating to the U.S. More recently, a furious French president Emmanuel Macron summoned the CEO of French pharmaceutical giant Sanofi, Paul Hudson, to the Élysée Palace after the latter declared that the U.S. government’s funding contributions granted it preferential access to any vaccine. Meanwhile, in a decidedly nationalist pledge of allegiance, AstraZeneca’s CEO, Pascal Soriot, has promised to provide any potential vaccine to Britain ahead of other nations.

More than 100 different vaccines are currently in development, with at least 10 being tested on humans. Five of these are being produced in China, where state-run media report preference will be given to Chinese nationals. British and American funding for local drug makers has come with similar stipulations. In India–one of the world’s largest vaccine producers–exports are likely to be curbed so that Indians can access the drugs first.

In response to international pressure, countries with large pharmaceutical sectors, such as the US, Switzerland, Britain and Japan, provisionally agreed to sign the World Health Assembly’s (WHA’s) voluntary patent pool resolution (which involves companies voluntarily giving up their monopoly rights over particular drugs). But this was on the condition that references to the Doha Declaration be removed.

The 2001 Doha Declaration was born out of the AIDS crisis of the 1990s. Back then, AIDS medication was prohibitively expensive. When, in the mid-1990s, a newly democratised and disease-riddled South Africa proposed to produce generic HIV medicines in order to combat the virus, the U.S. threatened it with trade sanctions.

In response and after years of campaigning, activists succeeded in amending the relevant World Trade Organization agreement to stipulate that governments do not have to honour intellectual property protections in the event of a public health emergency, known as the Doha Declaration

Of course, imperialist nations have ignored the declaration, resulting in tens of millions of needless deaths in the poorest parts of the world. In the end, both the U.S. and Britain boycotted the WHA’s resolution, on the basis that a patent pool “sends the wrong message to innovators who will be essential to the solutions the whole world needs”.

Then as now, profits have always trumped human lives for big pharma. In April, it was revealed that at least three SARS vaccines that might have prevented COVID-19 had had their funding cut as they were about to go to clinical trials. As it stands, vaccines are far more expensive to develop than other drugs, and many of the potential customers are the global poor, making pharmaceutical companies reluctant to invest.

Unlike medicines that treat chronic conditions, vaccines cannot be repeatedly sold to a base of long-term customers, making them relatively unattractive investment prospects. “There is just not enough profit margin in it for pharma companies”, according to Nobel laureate and immunologist professor Peter Doherty.

They live by profits and the rules of capitalism. And capitalism has no interest in human beings other than as consumers.

One of the most effective Ebola vaccines–developed in Canada, produced by a U.S. company and manufactured in Germany–for some represents a counter-example. “That’s how science is done, and we really ought to follow that paradigm”, said doctor Seth Berkley, chief executive of the Gavi Alliance, which is a philanthropic vaccine fund started by Bill Gates.

COVID-19 … is a global challenge that requires a global response.

But the reality is that the first nation to manufacture a COVID-19 vaccine at scale will not only be able to revive its productive capacities months ahead of the others but will also single out strategic allies for express shipments–thereby gaining a competitive economic advantage at the same time as it shores up its own imperialist interests.

The hope for genuine international cooperation in this context is painfully naive. At the end of the day, global capitalism’s priorities are fundamentally incompatible with saving lives. As Berkley more astutely observes,

We have enough land-based nuclear missiles to destroy the world. And in case that does not work, we keep air-based missiles and submarines. And that’s to prevent something much less likely than the evolutionary certainty that is a pandemic virus.

The crew of the Theodore Roosevelt were made painfully aware of this when the Trump administration refused to allow them to disembark earlier this year. Beseeching his superiors to allow the sailors into Guam, the carrier’s commander insisted,

We are not at war. Sailors do not need to die.

But in the face of the pandemic, U.S. imperialism is very much at war. After his subsequent sacking, the crew gave its captain a tumultuous send-off that bordered on mutiny. His action had cut across a policy of military aggression in which U.S. soldiers’ lives are of no more consequence, in the final analysis, than those of the Iranians, Venezuelans, Yemenis, Afghans, Iraqis or Somalis they are sent to kill.