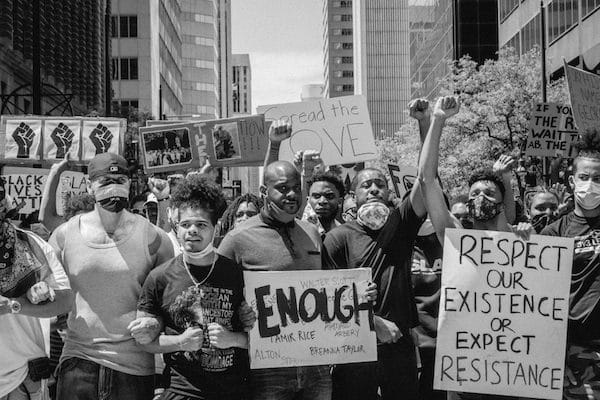 This essay connects police brutality to the brutality of capitalism. Capitalism has long promised a better life for people, a promise that was begrudgingly accepted by elites in the post-WWII age. With the downturn of the 1970s, elites introduced a replacement, neoliberalism, that, once dominant, made possible three developments: 1) endless war abroad and police militarization at home; 2) predatory capitalism, at home and abroad; and 3), the promotion of meritocracy to pacify citizens. Two decades into the twenty-first century, exploited citizens do not accept blame for their immiseration.

In the current moment, commentators often discuss police brutality as if it were disconnected from other kinds of injustices. But what many protestors understand is that policing occurs in the context of a prison-industrial complex, decades-long wage stagnation, and diminished prospects for the future. We should expect looting, for example, from citizens who are excluded from economic and political institutions, including property ownership. As the writer Kimberly Jones explained: “We don’t own anything!” American slavery, she reminded, was part of the history of capitalism, instituted to serve business interests: southern agriculture and northern textile work. In short, police brutality is one part of the brutality of capitalism.

Capitalism is marked not only by its considerable violence and inequality, but also its assurances of peace and equality. In his final volume on The Modern World-System, the late Immanuel Wallerstein showed how the capitalist world-economy appealed to hopes for a better life by promising fairness—in politics, in economics, and before the law—even as it went about securing inequality in those domains. The contradiction was partially resolved by the notion of delayed rewards. In the wake of the French Revolution, elites had to accept that publics saw themselves as citizens rather than subjects. Aware of the danger looming below, elites devised a clever strategy. According to Wallerstein, they effectively divided citizens into two categories, active and passive. The upper strata, well-to-do merchants and former nobles, kept the lower strata excluded from the political process. Over the last two centuries, minorities, women, and workers have been forced to separately fight for active citizenship.

The struggle for inclusion also played out on the world stage. The global logic of capitalism was that rich and powerful core nations became rich and powerful in part by keeping poor nations, the periphery, in a state of immiseration, first by colonialism and then by debt. The development of the core was financed by the underdevelopment of the periphery, a process shown by Walter Rodney in How Europe Underdeveloped Africa.

Excluded groups in the United States were slowly brought into the ranks of active citizens. In the twentieth century, women, Blacks, and workers achieved some successes roughly concurrent with the rise U.S. global hegemony. This extended phase, what we in retrospect call the Long New Deal, lasted from Franklin D. Roosevelt’s election to roughly 1970. It was not that elites wanted to share the imperial pie, but that rapid economic growth made it harder to justify exclusion.

Then came the global downturn of the 1970s. Like all great powers before it, U.S. hegemony declined. Seeing an opportunity, the capitalist class, which had always opposed sharing the wealth, proposed that government itself was holding the economy down. Their neoliberal ideology spread fast, becoming part of the public consciousness. Its rise to dominance outpaced that of any counterpart of the previous century, faster than anarchism, socialism, conservatism, even perhaps liberalism itself. No other ideology has become so prevalent that its proponents need not mention it by name. Instead, it portrays unlimited corporate power as the natural condition of human life. Perry Anderson has called it “the most successful ideology in world history.”

Neoliberalism made possible new policies that could never have been attempted during the Long New Deal. Washington chose a threefold strategy, each with domestic and foreign policy components, and each with disastrous consequences.

One, the United States went to war. Its foreign wars, in Afghanistan, Iraq, and across the Middle East, have not yielded peaceful or stable nations. Its militarized police forces at home, enforcing “broken windows” policies and mass incarceration, have not yielded peaceful or stable communities. Observers might assume Washington simply misunderstood what was needed in other nations and domestic localities. But in truth its choices were a reversion to the historical norm: elites, worried about their standing, made sure it was the lower strata that bore the weight of the world-economic downturn. Cornel West recently remarked that talking about police brutality without talking about justice is like commenting on drone strikes without a wider conversation on U.S. imperialism. Police aggression in the face of protests, which were themselves sparked by police aggression, is a sign of a government at war with its own citizens.

Two, Washington unleashed predatory capitalism. The term “free trade” implies that companies were simply left alone to pursue their interests. But as David Harvey has clarified, neoliberalism meant extensive government support for corporate interests. For example, one after another, nations signed free trade agreements, which, in addition to harming the lower strata, also included protections for private corporate interests. These clauses, known as investor-state dispute settlement (ISDS) agreements, have allowed major Western corporations to wield power over the postcolonial world before international tribunals. At home, the United States relaxed corporate regulations, reduced the power of unions, and allowed wages to remain flat. Over the last four decades, global and American inequality has dramatically increased.

The third choice was rhetorical, which was perhaps necessary to head-off public anger over endless war and predatory capitalism. Rather than simply promise delayed rewards, the former strategy of elites, the new vocabulary promised immediate rewards if only people were shrewd enough to go after them. This was the language of meritocracy, which claimed that the American dream was available to those who, through education and effort, took advantage of the opportunities presented. No longer did elites talk in Rooseveltian language about a “square deal” or a “new deal” for the American worker. In the twenty-first century, rather than make social welfare commitments to the public, all Washington has done is blame folks for their own misery.

Capitalism in the neoliberal age promotes endless war, corporate aggression, and notions of meritocracy. The professional-managerial class may be surprised by protests and looting, but the people in the streets were not the first to break the social contract. The promises of capitalism were never fair. Under neoliberalism, there were no promises whatsoever. Police violence is thus only one element of the violence of capitalism. At a minimum, we should expand active citizenship once again.

Gregory P. Williams is Assistant Professor of Political Science and International Affairs at the University of Northern Colorado. His new book is Contesting the Global Order: The Radical Political Economy of Perry Anderson and Immanuel Wallerstein (SUNY Press).