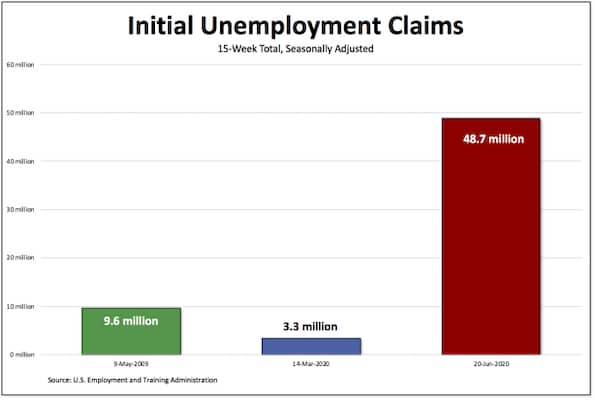 I’ve got those unemployment compensation
“Please fill out an application” blues.
I’ve got those “How much money did you earn?
Stand in line and wait your turn” blues.

They make me feel I’m committing a sin
Just to get back a little piece of what I put in.
I’ve got those “Have you had an interview?
Come back in a week or two” blues.

Yesterday morning, the U.S. Department of Labor (pdf) reported that, during the week ending last Saturday, another 1.4 million American workers filed initial claims for unemployment compensation. That’s on top of the 47.3 million workers who were laid off during the preceding fourteen weeks.

All told, 48.68 million American workers have filed initial unemployment claims during the past fifteen weeks.

To put that into some kind of perspective, I calculated the initial claims totals for two other relevant 15-week periods: the worst point of the Second Great Depression (from the end of January to early May 2009) and the weeks immediately preceding the current depression (from early December 2019 to mid-March 2020).

As readers can see in the chart above, the difference is stunning: 9.6 million workers filed initial claims during the worst 15-week period of 2009, 3.3 million from early December to mid-March of this year, and 48.7 million in the past fifteen weeks.

According to the most recent report from the Bureau of Labor Statistics, the number of unemployed workers actually fell by 3.2 million to 17.8 million in June, leading to an official unemployment rate of 11.1 percent—although, the surveys on which those data are based only capture those who were unemployed in mid-June, before the new wave of business shutdowns and layoffs.*

Moreover, even as the protests ignited a national reawakening on racism in the aftermath of the police killing of George Floyd and others, African Americans have experienced the slowest recovery of all racial groups. While the black unemployment rate in June fell (to 15.4 percent), it is still much higher than the white rate (10.1 percent) and higher even than the Hispanic rate (14.5 percent). 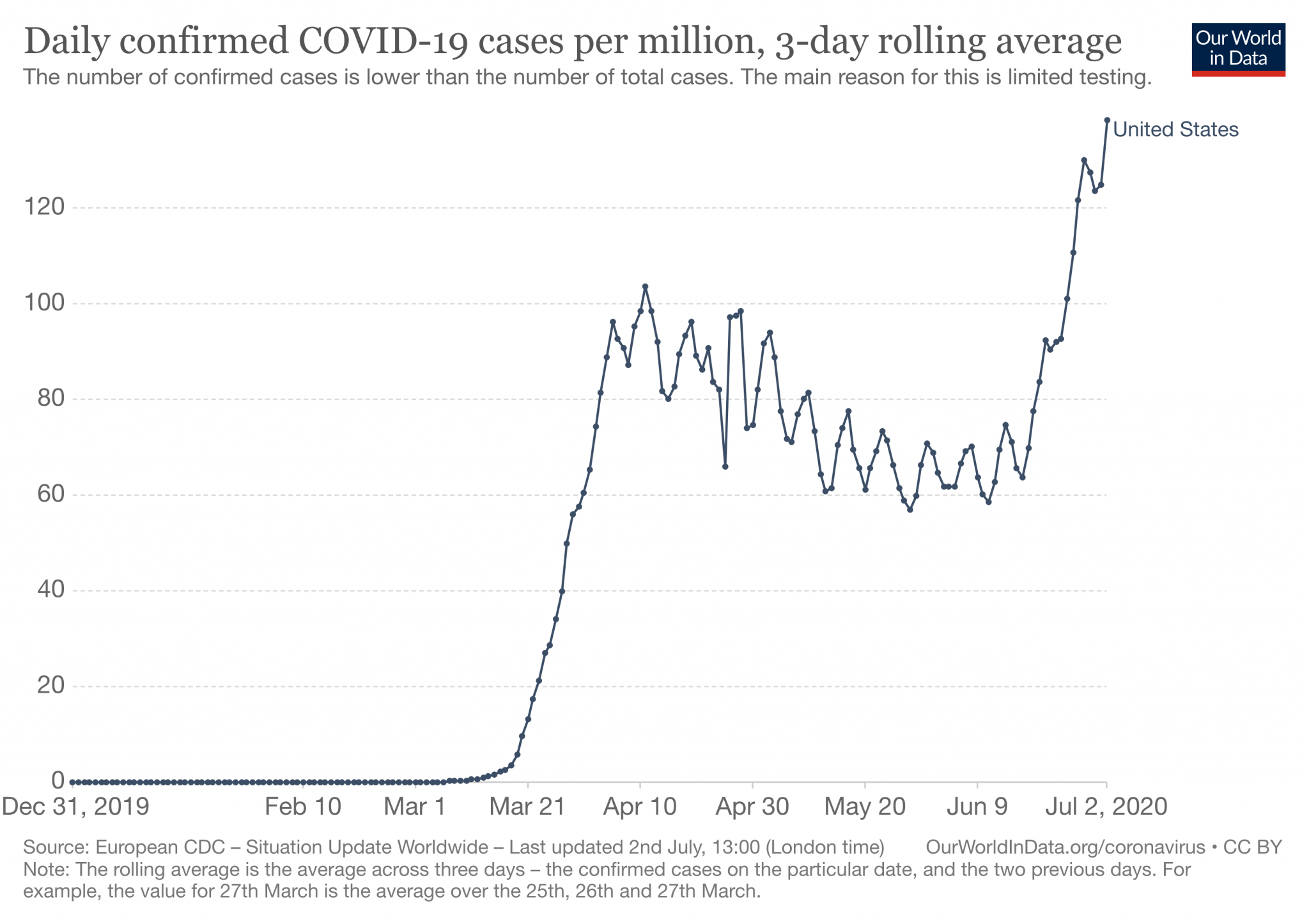 On top of that, we should add in the workers who are involuntarily working part-time jobs—in other words, workers who would like to have full-time jobs but have been forced “for economic reasons” to accept fewer hours—and discouraged workers—Americans who are able to work but have given up looking for a job. The reserve army of unemployed and underemployed workers then rises to more than 27.8 million Americans.

Moreover, as I argued recently, millions of other unemployed workers are not included in this number:

In addition to first-time job-seekers who have unable to find a job (some unknown portion of an estimated 3.8 million high-school graduates, 1 million who graduated with associate’s degrees, and 2 million with bachelor’s degrees), it doesn’t include any of the estimated 8 million undocumented workers who have lost their jobs.

Meanwhile, employers and the White House (including Labor Secretary Eugene Scalia) are continuing to clamor for businesses to be allowed the freedom to reopen. But they’re worried unemployed workers, who have received supplemental benefits as a result of the CARES act, will not want to return to work under conditions that raise risk of becoming infected with the virus. So, they’ve announced both that the extra $600 “disincentive” for people to return to work will be allowed to expire at the end of July and that any workers who refuse to be called back to work will lose their unemployment benefits.

Their only plan, in the midst of the growing pandemic, is to turn the screws and force more and more American workers—black, brown, and white—to have the freedom to sell their ability to work to someone else.

*Yesterday, the United States set another record for new coronavirus cases. A day after surpassing 50 thousand for the first time, the total hit 55,220. On Wednesday, there were 52,788 new cases.