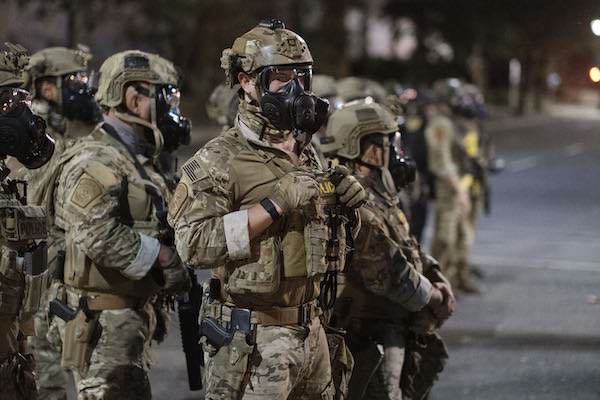 On Thursday, both Donald Trump and his white nationalist and nativist advisor Stephen Miller announced that they will begin deploying armed officers from the Department of Homeland Security (DHS) on the streets of cities that have seen large-scale protests—specifically, cities governed by Democrats. According to The Daily Mail, Trump stated he would “be looking at Seattle, Minneapolis, Portland, and Chicago.” To understand what the stakes are, we focus on Portland, where DHS agents have already been brutalizing demonstrators for weeks.

At the beginning of June, when Trump tried to mobilize the military against protesters, he discovered that they were not willing to use up their credibility propping up his administration. Trump’s order to attack DC protesters so he could stage a photo op and his push to invoke the Insurrection Act only further diminished his polling numbers, illuminating some of the fault lines within the state. 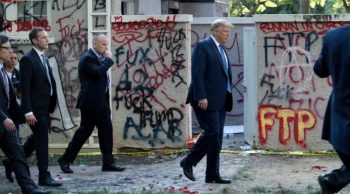 In the month since, Trump has worked out which of the armed elements of the federal government are loyal enough to him to go to war against U.S. citizens on his behalf. As demonstrators pulled down statues outside the White House and his faithful Fox News spin doctors labored overtime to come up with new narratives justifying violence against civilians, Trump called for Department of Homeland Security agents to deploy to places where statues were under attack. Now he is expanding their mission, challenging local and state authorities’ control. It is a classic Trump move to sidestep the bad press resulting from his ruinous response to the COVID-19 crisis and his efforts to cover up the mounting death toll by redirecting the news cycle to his grudge match with the Democrats, “antifa,” Black Lives Matter, and other such bugaboos. But deploying DHS forces is also an opportunity for him to test out a new strategy, attempting to set a new precedent for militarizing and politicizing the suppression of protest.

If this succeeds, Trump will continue to push the envelope. Today, it is beside the point to compare developments in the United States to the situation in Germany in the early 1930s; we are already seeing the outlines of 21st-century fascism, or else of civil war. If they remain spectators, those who anticipate the presidential election as a referendum on Trump’s brand of government may discover in November that the future has already been decided. And if there are not serious consequences for this decision, then regardless of whether Trump wins the election, we will see DHS forces regularly deployed in this manner more and more, intensifying the police state. 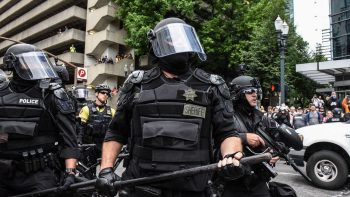 The foot soldiers of autocracy.

Starting in late May, Portland police mobilized riot troops daily to push protesters off the street, targeting and brutalizing journalists and turning the downtown into a shooting gallery with tear gas and “less lethal munitions.” DHS agents first joined them in brutalizing protesters weeks ago. According to the Williamette Weekly,

For the past two weeks, federal officers have patrolled the blocks surrounding the Mark O. Hatfield United States Courthouse. That’s thanks mostly to President Donald Trump, who deployed the Department of Homeland Security to at least three U.S. cities that had seen significant street protests—Portland, Seattle, and Washington, DC.

My friend just sent me this pic that’s across the Portland Bureau of Transportation. Wonder what it’s for. pic.twitter.com/AT5IFbsLuq

In a DHS memo explaining the deployment to Portland, described by the Portland Mercury as “an inflammatory statement riddled with inaccuracies and spelling errors” and in some cases lacking even the most basic punctuation, acting DHS secretary Chad Wolf repeats the phrase “violent anarchists” 72 times, using this phrase to designate a total of several thousand people. In many cases, he brands a group of hundreds “violent anarchists” on account of the alleged actions of just a couple individuals. Of course, secretary Wolf and his cronies have no way of knowing the politics of every person involved in the protests. Rather, their goal is to carry out classic totalitarian propaganda: in repeating this phrase endlessly, they seek to invent an enemy to justify a militarized takeover.

As the Portland Mercury pointed out,

Wolf did not mention that the majority of violence Portlanders have witnessed over the past 47 days has come from the hands of the police.

While DHS officials publish fear-mongering announcements about “violent anarchists” painting messages on the plywood covering the windows of the Hatfield courthouse in Portland, federal agents have been set loose on demonstrators throughout the city. On July 11, federal agents in Portland shot 26-year-old Donavan LaBella in the head with an impact munition, fracturing his skull. LaBella required facial reconstruction surgery and was still in serious condition at the hospital days later.

UPDATE: Today, Acting Secretary of Homeland Security Chad Wolf issued a statement in defense of the use of these Federal officers on the streets of Portand. https://t.co/viYeyjL63R

Photos shared with me by an unnamed source from yesterday. This is a fed set up on top of the federal courthouse. pic.twitter.com/TJLL9GTA7R

According to a report on Oregon Public Broadcasting,

Federal law enforcement officers have been using unmarked vehicles to drive around downtown Portland and detain protesters since at least July 14. Personal accounts and multiple videos posted online show the officers driving up to people, detaining individuals with no explanation of why they are being arrested, and driving off.

We should take care not to treat the intervention of federal agents as exceptional; it is just the latest chapter in a story involving state repression at every level. As the Portland Mercury reports, Portland police have been inflicting plenty of violence themselves:

On Tuesday, a PPB officer was caught on film removing a protester’s protective face mask to pepper spray a protester in the eyes. This morning, the public witnessed a gaggle of PPB officers chase and tackle a person who was biking down SW 4th in downtown Portland—despite that street being open to public use.

These federal officers (?) just rushed up and arrested someone for no reason pic.twitter.com/xcFVuoMZmN

WATCH – Portland Police officers knock a protester off of his bicycle and arrest him outside of Lownsdale Square Park near the Federal Courthouse downtown #LiveOnK2 pic.twitter.com/tow0GzeyzW

So here's the video, from TeebsGaming on https://t.co/DafGnlPdl3 , of an officer smacking the phone from a protester's hand into the window of the PPA building. And the broken window is what they then used as their reason to declare a 'riot' and gas people. #PortlandProtest pic.twitter.com/x8iqQMFvTx 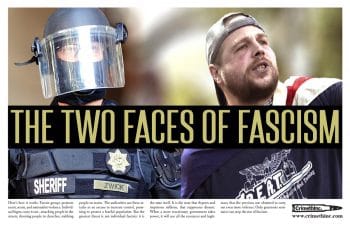 Already in 2017, when fascist Jeremy Christian murdered two people after attending a far-right rally in Portland, we were compelled to publish this poster explaining how fascists and Portland police work together.

The Two Faces of Fascism

For years, the Portland Police and the Department of Homeland Security have worked with fascist and far-right organizers to coordinate their demonstrations and facilitate their violence against anti-racist and anti-fascist counter-protesters as well as the general public. In June 2018, DHS worked directly with far-right leader Joey Gibson to plan a rally in downtown Portland during which fascists were permitted to attack counter-demonstrators with impunity. In early 2019, texts between Gibson and members of the Portland Police Bureau came to light, revealing that the police were feeding Gibson information, letting him know when his colleagues that were on probation needed to lay low, and informed him in advance about anti-fascist events and activities. Police faced no consequences for this.

No One Is Coming to Save Us 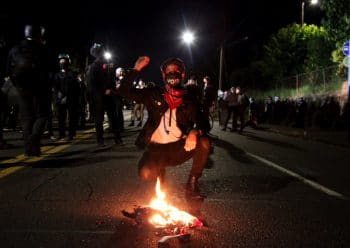 A demonstrator in Portland on the night of July 16.

For now, Trump and his supporters are making great efforts to justify the intervention of federal officers in Portland, to such an extent that the governor of Oregon has accused him of simply attempting to pull “an election stunt.” But if this becomes normalized, one day, the Department of Homeland Security and other federal agencies will intervene all around the country on a regular basis, without need of justification—attacking and permanently injuring protesters, kidnapping activists in unmarked cars, and suppressing protest by lethal force if necessary. Trump is not just a rogue demagogue; he is testing the balance of power on behalf of the entire ruling class, trying to figure out just how much they can get away with.

The brutality of the DHS and the Portland police illustrates why people rebelled in response to the murder of the George Floyd in the first place. There is no question of the government or the police being accountable to us. The only way we can gain leverage on them is by becoming ungovernable, making it impossible for them to keep their economy running at our expense. The answer is not to petition the authorities for more stringent rules governing state and federal intervention—a doomed venture—but to delegitimize all the forces of oppression, from the federal to the local level, and organize together to make it impossible for them to rule us. 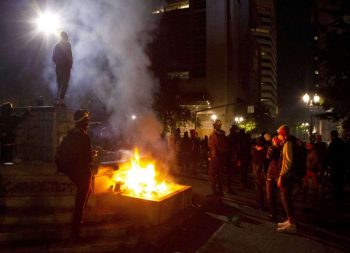 For a world without police.

While it currently seems unlikely that Trump can craft a consensus among the ruling class to hold on to power—democratically or not—for four more years, it is certain that the marauders who make up his administration are in no hurry to lose their grip on the reins of the state. As the rifts within the ruling class widen alongside the gulfs in our entire society, some of them may be legitimately concerned that they could share the fate of those of Trump’s closest associates who have already been found guilty of crimes. If deploying DHS against “violent anarchists” goes well for Trump, he will move on to his next adversaries, and the balance of power may begin to shift in his favor.

Rather than imagining that elections and “the rule of law” will protect us from tyranny, we must understand how representation and law are themselves bound up in the perpetuation of the institutions via which tyrants like Trump rule. The only reason we have elections or rights in the first place is that our predecessors fought a revolution and then a bloody civil war. The work of liberation that they began still waits for us to finish it today.