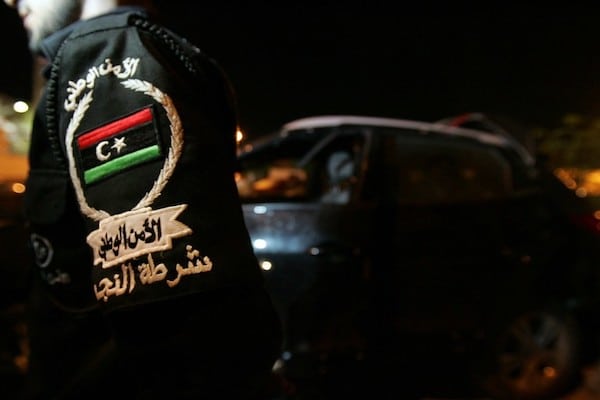 Follow LIBYA-UNREST-BLAST-BENGHAZI A security officer inspects a damaged car after a bomb explosion which targeted a former Kadhafi regime officer, in Benghazi, on November 7, 2012. A car bomb exploded in Libya’s second city of Benghazi late November 7, wounding an officer who had served in the regime of slain leader Moamer Kadhafi, a local security official told AFP. Hussam al-Raaid, a former officer of the toppled regime’s reviled internal security services, was wounded when his booby-trapped vehicle exploded outside his house, the official said on condition of anonymity. AFP PHOTO / Abdullah Douma

Ahmed, who lives in Tripoli, Libya, texts me that the city is quieter than before. The army of General Khalifa Haftar—who controls large parts of eastern Libya—has withdrawn from the southern part of the capital and is now holding fast in the city of Sirte and at the airbase of Jufra. Most of Libya’s population lives along the coastline of the Mediterranean Sea, which is where the cities of Tripoli, Sirte, Benghazi, and Tobruk are located.

Haftar, who was once an intimate of the United States’ Central Intelligence Agency (CIA), is now prosecuting a seemingly endless and brutal war against the United Nation’s recognized Government of National Accord (GNA) based in Tripoli and led by President Fayez al-Sarraj. To make matters more confusing, Haftar takes his legitimacy from another government, which is based in Tobruk, and is formed out of the House of Representatives (HOR).

Ahmed says that the quiet is deceitful. Militias continue to patrol the streets along the Salah al-Din Road near where he lives; the rattle of gunfire is anticipated.

On July 8, United Nations Secretary-General António Guterres made a statement that could have been delivered at any point over the last decade. “Time is not on our side in Libya,” he announced. He laid out a range of problems facing the country, including the military conflict, the political stalemate between the GNA and the HOR, the numbers of internally-displaced people (400,000 out of 7 million), the continued attempts of migrants to cross the Mediterranean Sea, the threat from COVID-19, and the “unprecedented levels” of “foreign interference.”

The UN Human Rights Council passed a resolution to send a Fact-Finding Mission to Libya to investigate human rights violations in this war, including the mass graves found in Tarhouna. The credibility of the Council is in doubt. An earlier Commission of Inquiry on Libya set up in 2012 to study war crimes in 2011-2012 was shut down largely because the North Atlantic Treaty Organization (NATO) refused to cooperate with the investigation. A second inquiry, set up in March 2015, closed its work in January 2016 with the political deal that created the Government of National Accord.

Guterres did not mention the NATO war in 2011. I am told that he wants to appoint a joint Special Representative with the African Union and he would like a full review of the UN mission. All that is well and good; but it is short of what is necessary: an honest look at the NATO war that broke the country, fomenting a conflict that seems without end.

Statements about Libya drip with evasion. These terms—“foreign interference” and “foreign-backed efforts”—are dropped into conversations and official statements without any clarification. But everyone knows what is going on.

I ask Rida, who lives in Benghazi (now under the control of General Haftar), what she makes of these phrases. “We all know what is going on,” she tells me via text. “The government in Tripoli is backed by Turkey and others; while Haftar is backed by Egypt and others,” she writes.

At the core, she says, this is a dispute between two regional powers (Turkey and Egypt) as well as a contest between the Muslim Brotherhood (Turkey) and its adversaries (Egypt and the United Arab Emirates). Wrapped up in all this are contracts for offshore drilling in the eastern Mediterranean Sea, which additionally involved Cyprus and Greece.

It is not enough that this is a regional conflict. There is accumulating evidence that General Haftar is being supported by armed mercenaries (from Russia and Sudan) and by arms shipments from France, while the United States seems to have hedged its bets with support to both sides in the conflict.

Last year, General Haftar’s forces moved swiftly toward Tripoli, but were eventually rebuffed by the intervention of Turkey (which provided the Tripoli government with military aid as well as Syrian and Turkish mercenaries).

In late December, Turkey formally signed a military and security agreement with the Tripoli-based GNA, which enabled Turkey to transfer military hardware. This agreement broke the terms of the UN resolution 2292 (2016), recently reaffirmed in UN resolution 2526 (2020). Egypt and the United Arab Emirates have openly been supplying Haftar.

Now, the forces of the Tripoli government have moved to the central coastline city of Sirte, which has emerged as the key hotspot in this contest.

The Tobruk government, which backs General Haftar, and a pro-Haftar tribes council urged Egypt’s General Abdul Fatah El Sisi to intervene with the full force of the Egyptian armed forces if Sirte falls to the Turkish-backed government. Egypt’s military drill—called Hasm 2020—came alongside the Turkish navy’s announcement of maneuvers off the Libyan coast—called Navtex.

This is a most dangerous situation, a war of words escalating between Turkey and Egypt; Egypt has now moved military hardware to its border with Libya.

Of course, oil is a major part of the equation. Libya has at least 46 billion barrels of sweet crude oil; this oil is highly valued for Europe because of the low costs to extract and transport it. Countries like the UAE, which are pushing the embargo of Libyan oil, benefit from the withdrawal of Libya, Iranian, and Venezuelan oil from already suppressed world oil markets. Libya’s National Oil Corporation (NOC) has stopped oil exports since January; from about 1.10 million barrels per day, Libyan oil production fell to nearly 70,000 barrels per day.

Neither Haftar nor the Government of National Accord in Tripoli can agree on the export of oil from the country. Oil has not left the country for the better part of the past six months, with a loss—according to the NOC—of about US$6.74 billion. General Haftar controls major oil ports in the east, including Es Sider, and several key oil fields, including Sharara.

Neither side wants the other to profit from oil sales. The United Nations has intervened to try and resolve the differences, but so far there has been limited progress. The entire conflict rests on the belief that either side has that it could win a military victory and therefore take the entire spoils; no one is willing to compromise, since any such agreement would mean a de jure partition of the country into its eastern and western halves with the oil crescent divided between the two.

UN Secretary-General Guterres has surrendered to reality. In his recent statement on Libya, he listed a series of “de-escalation efforts, including the creation of a possible demilitarized zone”; this “demilitarization zone” would likely be drawn somewhere near Sirte. It would effectively divide Libya into two parts.

Neither Ahmed nor Rida would like their country to be partitioned, its oil then siphoned off to Europe, and its wealth stolen by oligarchs on either side. They had misgivings about Muammar Qaddafi’s government in early 2011; but now both regret the war that has ripped their country to shreds.