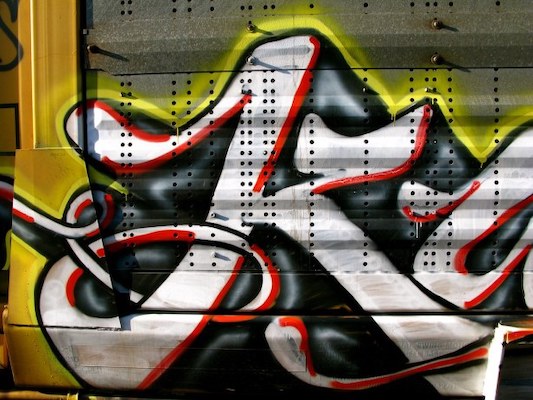 That’s because there’s no single path of recovery for everyone. For some, the recovery from the pandemic crisis has been just fine, while for many others there has been no recovery at all. Instead, things are going from bad to worse. In other words, there’s a growing gap between the haves and have-nots—or, as Peter Atwater has put it, “there have been two vastly divergent experiences.”

That’s why Atwater invented the idea of a K-shaped recovery.

I think he’s right, although I don’t divide the world up in quite the same way.

The stem of the K illustrates the quick and deep crash that almost everyone experienced as the pandemic spread and large parts of the U.S. economy were shut down. Then, as time went on, with massive federal bailouts and businesses reopening, the arm and leg of the K have moved in very different directions.

For the small group at the top—including large corporations and wealthy individuals—there has in fact been a real recovery from the pandemic crisis. The downturn has turned out to be nothing more than a bump in the road. Businesses that were declared essential were able to purchase the labor power of workers and continue their operations, while others have been free to get rid of whatever workers they deemed unnecessary to making profits. And, in both cases, corporations on both Main Street and Wall Street were showered with support from an extraordinary array of government programs—from low interest-rates and Fed purchases of private bonds to forgivable loans and tax breaks—with little accountability or oversight. 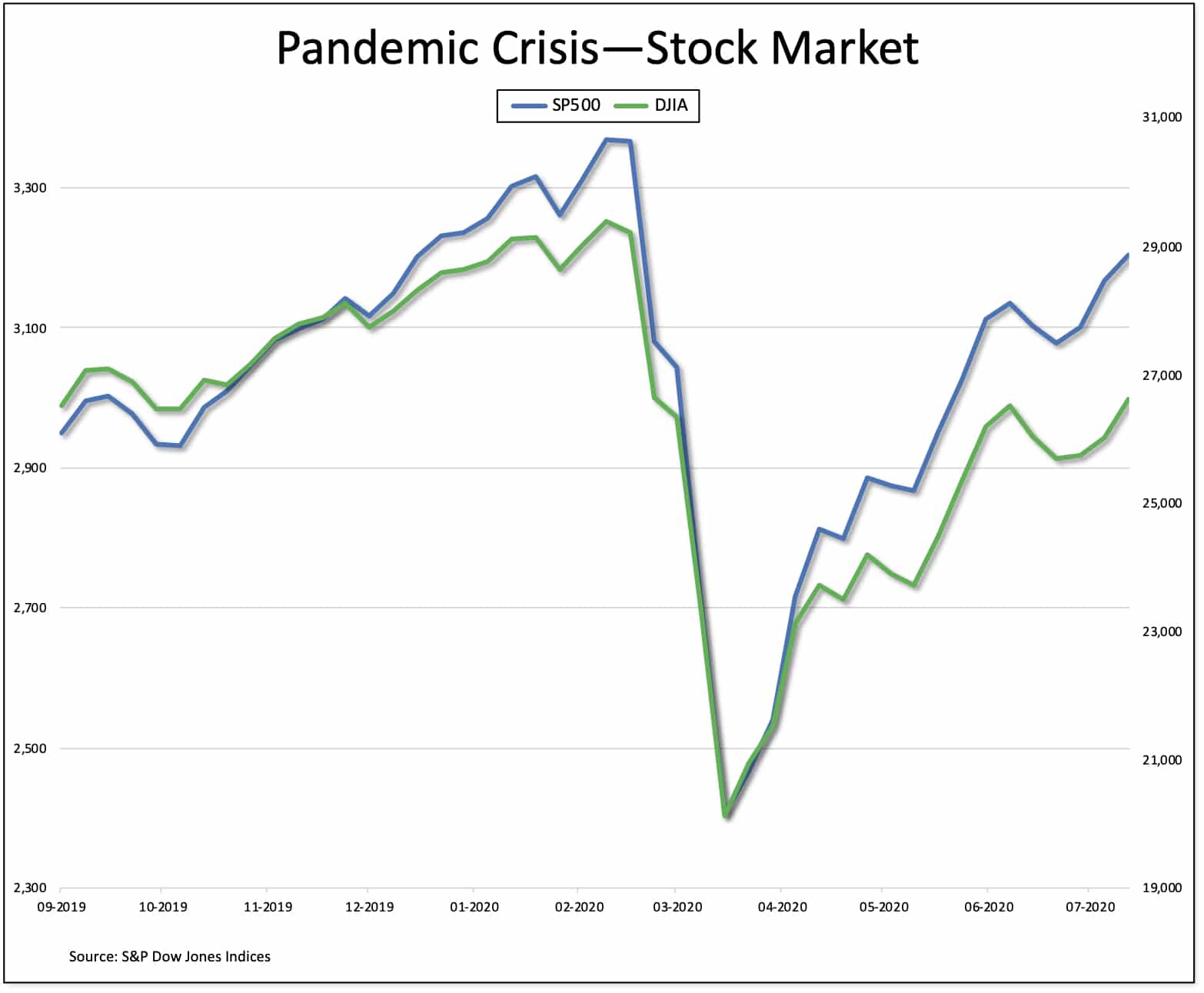 The best illustration of their path to recovery is the rebound in the stock market, which by any measure (such as the Standard & Poor’s 500 or Dow Jones Industrial Average indices, in the chart above) has regained most of the ground lost in the crash earlier this year. The S&P, which stood at 3368.68 in mid-February, and fell to 2405.55 in mid-March, ended yesterday at 3251.52. Similarly, the DJIA, fell from a peak of 28996.11 to a low of 20117.20 and yesterday reached 26680.87. This rebounds both signals that investors are betting on a continued recovery in corporate profits and represents a growing claim on the surplus produced by workers.

The small group at the top of the U.S. economy is quickly climbing the arm of the K-shaped recovery.

Meanwhile, everyone else is headed in the opposite direction. They’re the “essential” workers who have been forced to have the freedom to continue to sell their ability to work to their employers and to either labor at home with little control over their working conditions or with the threat of spreading infections in their existing workplaces, or the tens of millions of other workers who have been laid off, had their hours shortened, or suffered pay cuts. We know how different their own experience has been from those at the top because initial claims for unemployment benefits are now more than 50 million, hunger and food insecurity are spreading, and they’re having difficulty paying their rent and mortgages. 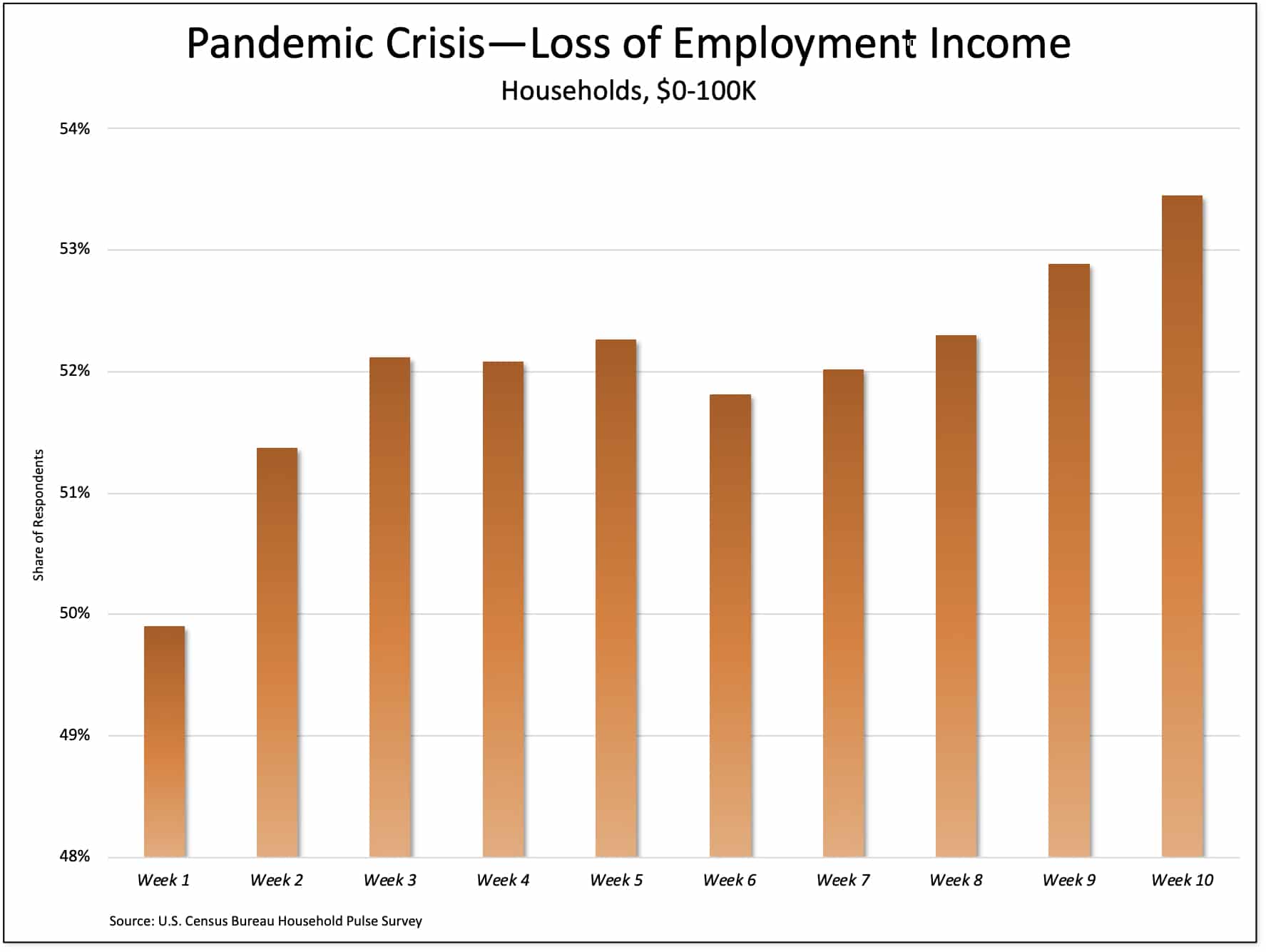 The extent of the economic and social disaster for those at the bottom is perhaps best represented by the loss of employment income for households making up to $100 thousand a year (and therefore about half of American households). According to data assembled in the the Census Bureau’s weekly Household Pulse Survey, the share of households in those income groups has grown from just under 50 percent (for 23 April to 5 May, the first week when the survey was conducted) to 53.44 percent (for the latest week, 2 to 7 July).

The situation of American workers is clearly the leg at the bottom of the K, which represents no recovery at all.

The fact that the United States is currently undergoing a K-shaped recovery from the pandemic crisis should come as no surprise, and not just because the administration of Donald Trump and his allies in Congress have promoted and adopted policies that have both worsened the pandemic and shifted the burdens of the economic crisis to those who can least afford it. It’s also because the American economy and society were already characterized by grotesque levels of inequality stretching back at least four decades, which were in turn reinforced by the uneven recovery from the Second Great Depression under the previous administration. Trump and the “hacks and grifters” around him have only nudged things along in the same direction, creating even more powerlessness and hopelessness for the majority of the population.

The problem is, the majority of Americans at the bottom haven’t been heard for too many years, from long before the pandemic started to ravage the country. In the late 1960s, shortly before he was assassinated, Martin Luther King Jr. called their protests “the language of the unheard.”

Even earlier, the late John Lewis wrote (but was never allowed to deliver) a frank description of the situation in the United States that is eerily prescient of the current predicament:

This nation is still a place of cheap political leaders who build their careers on immoral compromises and ally themselves with open forms of political, economic and social exploitation.

That’s why, he wanted to tell those who participated in the 1963 March on Washington,

if any radical social, political and economic changes are to take place in our society, the people, the masses, must bring them about.

The K-shaped form of the current recovery is both a testament to the compromises of the latest generation of “cheap political leaders” and a reminder that the “the people, the masses” are the ones who must bring about the necessary changes in American society to create a more equal social, political, and economic recovery.