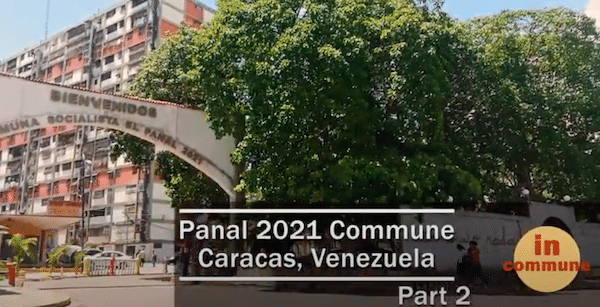 The second part of our “In Commune” episode dedicated to the Panal 2021 Commune focuses on the economic side of popular power and the challenges ahead.

This chapter of In Commune explores the The Panal 2021 Commune, which lies in the heart of the Caracas parish of 23 de Enero, a community known for its combative participation in the toppling of the dictator Marcos Pérez Jímenez and its important role in the resistance against the neoliberal governments of the 1980s and ‘90s. This commune was forged with the ideological discipline and organization of a local collective, turned national popular movement, now known as the Alexis Vive Patriotic Force. The fusion of this revolutionary popular movement with the proposal of the communes brought forth a unique experience of community organization and a necessary example of a complex and integral communal economy.

Since its genesis, the Panal 2021 Commune emphasized the communal economy as a central part of their organization. The creation of a sugar packaging plant, a bakery and a textile factory played an important role in initial stages of the commune, providing an economic and organizational backbone from which the commune has continued to build, even as government financing has wavered and the urgency of production has increased under the deepening economic crisis in Venezuela.

In a permanent effort to adapt and deepen their economic strategy, the Panal 2021 Commune created structures for the promotion and organization of local economic activities, providing employment, liberating work environments and opportunities for the communards, as well as goods and services at fair prices for the community. These collectives are designed not only as productive units, but also as ideological and practical schools, where communards learn and experience more humane systems for work, decision-making and an alternative economy of local sustainability.

The Office of Planification and Production of the commune strategically invests the surplus from each of the Associated Work Collectives in communal social programs. One important example created in recent years is a popular food kitchen, which provides free meals and activities for 70 to 130 vulnerable children on a daily basis. The commune has also self-financed other social programs such as sports schools, cultural programs, community education projects and the construction of recreational infrastructure, contributing to the general well-being and collective security of the community.

The profits from the Associated Work Collectives are likewise invested in creating new collectives. In recent years, the commune has set up a carwash, a mechanical workshop, a lunch counter, convenience stores, a communal cable TV service, and a weekly market of fresh vegetables brought directly to the community from a national network of farmers and popular movements called Pueblo a Pueblo.

The blockade against Venezuela has had a huge impact on the state’s capacity to import important raw materials, deeply affecting the country’s capacity for industrial processing. Central productive units of the El Panal 2021 Commune, such as the bakery and the textile factory, are dependent on imported products. Although these units have survived over the years, Alexis Vive and the Panal 2021 Commune have seen the need to develop alternatives so as to create complete productive chains, from the production of raw materials to their industrial processing and distribution. That has translated into a push towards the countryside and agricultural production with the foundation of “rural brigades”. These brigades relocate to rural areas where Alexis Vive has purchased or rescued land for agriculture, with production later brought to the commune for it’s processing and distribution.

The Panal 2021 Commune and Alexis Vive have also joined together with popular movements and communes from across the country in a call for popular unity in defense of the political project of the Bolivarian Revolution and to deepen the communal economy. Along with other productive communes on a national level, such as the El Maizal Commune, the Panal 2021 Commune has begun to build a new movement, called the Communard Union. This organization has already begun to show its fruits in the form of production and distribution chains of communal products as well as the sharing of knowledge and experiences through its own education program, taking promising steps towards a future communal confederation.

Although circumstances are rapidly changing in Venezuela, creating new obstacles and challenges for the advance of popular power, as Bárbara Martinez explains, the Alexis Vive Patriotic Force and the Panal 2021 Commune have not wavered from their path.

We have one horizon. It is the commune. Through the political project that our Comandante Chávez has given us. It is Bolivarian Socialism, our socialism, on our own terms, in our own way, in our own time.