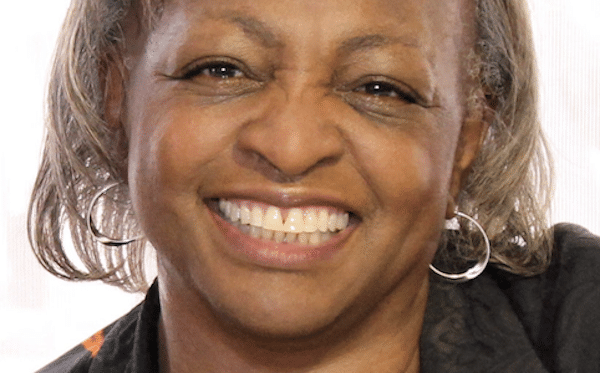 TheJuly 31, 2020, episode of CounterSpin reaired a segment featuring Carol Anderson on voter suppression, which originally ran February 28, 2020. This is a lightly edited excerpt.

Janine Jackson: Florida passed an amendment last year to return the right to vote to people who had served time for felony convictions, part of a history in this country of expanding the franchise to ensure that those who are affected by government have a say in shaping it. Republicans pushed back, unsurprisingly, demanding that before any ex-felons could exercise their right to vote, they had to pay off any and all court fines, fees and restitution. That too, partook of a tradition, of switching up brutal for bureaucratic means to bar the inclusion of marginalized populations in the polity. The matter in Florida is still being disputed.

Republican voter suppression, only ever thinly veiled, is fully out of the bag now. And while elite media notice it and occasionally wring their hands, their coverage is too often focused on party lines, and does not do justice to the scope, the depth or the impact of this fundamentally anti-democracy campaign.

In February 2020, we spoke with Carol Anderson, professor of African-American studies at Emory University, and author of, among other titles, White Rage: The Unspoken Truth of Our Racial Divide and One Person, No Vote: How Voter Suppression Is Destroying Our Democracy. I asked her, first, to talk about what she sees in the current landscape that represents what she has called “bureaucratic violence” on people’s right to vote. 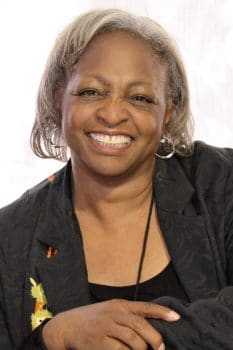 Carol Anderson: “Bureaucratic violence, that’s the array of policies that have been pooled together to figure out, ‘How do we get around the 15th Amendment, while targeting those that the 15th Amendment was designed to protect?’”

Carol Anderson: “Bureaucratic violence”: I use that term because often, when we think about disfranchisement, we think about it in terms of the violence on the Edmund Pettus Bridge in Selma in 1965. But bureaucratic violence, that’s the array of policies that have been pooled together to figure out, “How do we get around the 15th Amendment, while targeting those that the 15th Amendment was designed to protect?”

The 15th Amendment of the Constitution says that the right to vote shall not be abridged “on account of race, color or previous condition of servitude.” And what we saw originally was the Mississippi Plan of 1890, that figured out how to get around it with poll taxes and literacy tests. What we’re seeing now is what I’m calling “Jim Crow 2.0,” for want of a better term, are these states doing things like voter ID laws, and poll closures and voter roll purges. And all of these things have the aura of trying to protect democracy, trying to protect the integrity of the ballot box, but it’s based on the lie of massive rampant voter fraud.

And when I say “lie,” I mean that Justin Levitt, a law professor out of California, found that between 2000 and 2014, there were a billion votes cast in elections, and there were only 31 cases of voter impersonation fraud.

CA: Out of 1 billion votes. So that’s the lie of massive rampant voter fraud, about two cases per year. But from that, we get the kind of voter ID laws that say, “Oh, everybody’s got an ID.” But what these state legislatures have done is to identify the types of IDs that whites have, that African-Americans don’t have, that Latinos don’t have, that Native Americans don’t have—and then to privilege the ones that whites have, while making it seem fair and across the board.

In fact, it is anything but; it is what led the Fourth Circuit in North Carolina to say that the North Carolina state legislature had targeted African Americans “with almost surgical precision” with its array of laws, including those voter ID laws.

And what we’re seeing as well are voter roll purges. We saw, in Ohio, another massive purge of several hundred thousand. And because that list was made public, it had a 20% error rate, at least, including the head of the League of Women Voters. These targeted hits, the voter roll purges, what they’re designed to do, again, it’s supposed to sound reasonable: “You gotta keep the voter rolls cleaned up.” So if people die, they shouldn’t be on the list; if people move out of state, they shouldn’t be on the list. We get that.

But what these states have done is to target people that they say haven’t voted regularly, although the National Voter Registration Act, the “Motor Voter Law” of 1993, specifically says you cannot remove people simply because they haven’t voted. You don’t lose your right to vote simply because you haven’t voted, but that’s what these states have done. And the U.S. Supreme Court, last year in June, approved that, because this is the same Supreme Court that gave us the Shelby County v. Holder decision that gutted the Voting Rights Act.

So there are an array of policies, including poll closures—because we know the further you remove a polling place, for instance, from the Black community, voter turnout goes down, because it has to deal with distance and access to transportation. So if you make the polling place inaccessible—here in Georgia, for instance, they tried to move the polling place for the Black community in Sparta 17 miles away. That’s inaccessible. On a work day!

JJ: And all these things are, you say, “wrapped in the veneer of law.” So if you’re not paying attention, you can almost think it makes sense: “Oh, we’re not saying they can’t vote because they’re Black; we’re saying they don’t have the right form,” you know, “It’s not because they’re young, it’s because they can’t show residency,” you know, “It’s not that they have a disability, it’s that we can’t get a polling place in that particular….” It’s always just that one level of indirect, that they think they’re fooling you that it’s not targeted in some way.

CA: Exactly. And because it’s what I call this “bureaucratic violence,” we don’t see it, and so it doesn’t create the sense of urgency. But from 2014 to 2016, the Brennan Center identified that 16 million Americans were purged from the voter rolls. Sixteen million. That is silent civic death. 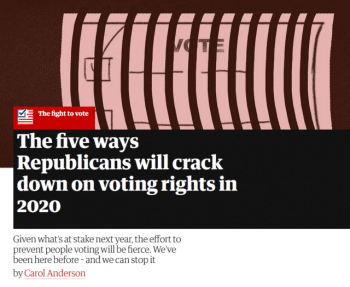 JJ: In your piece from last November in the Guardian, “The Five Ways Republicans Will Crack Down on Voting Rights in 2020,” you also list judges and the role of the courts, because they’ve got a role to play here, too, right?

And the Republicans in the Senate have been pushing these judges through, with no real vetting whatsoever. So several have gone through, more than ever before, that the American Bar Association has ruled as being unqualified.

And so we have unqualified federal judges with lifetime appointments on the bench. And so what happens then is, as these cases—civil society, the NAACP Legal Defense Fund, the ACLU, the NAACP, the League of Women Voters, they have been suing the states for these voter suppression laws and how discriminatory they are. But as these cases go up, they’re hitting these judges, these judges who do not believe in voting rights.

And that is why this election of 2020 is so crucial. Because if we have a federal judiciary just loaded down with those who do not believe in basic civil rights, do not believe in the rights guaranteed in the Constitution. Whew….

CA: Then we are going to be back to where we were after Reconstruction, when that Supreme Court basically gutted the 14th and 15th Amendments, and skewered the 13th Amendment, that has badges of servitude. And it took about 100 years and a civil rights movement to undo the damage coming out of Reconstruction with that Supreme Court. And that’s where we are headed again, unless we stop it.

JJ: Let’s talk a bit about resistance. As you note in the book, there is—well, first of all, there’s awareness. Not everyone is falling for this “protecting the integrity of the process” line. But also there’s resistance, and some states even pushing back and making it easier to vote, right; that’s happening, too?

CA: Oh, absolutely, absolutely. So the resistance, I mean, you’re getting incredible organizing in local communities. You’re seeing organizations, like I’ve mentioned before, as well as Fair Fight, in there mobilizing, organizing, suing.

And you do have states that have the leadership that actually believes in democracy. So they are doing same-day voter registration, they are doing automatic voter registration. One of the things that they did in California, following Oregon’s lead, what California did was to say, “Yes, we’re going to do automatic voter registration, but we’re going to also pre-register 16- and 17-year-olds, so that when they turn 18, they are automatically registered to vote.” This broadening of the electorate, this sense that American citizens are engaged, invested in this nation, that is not a bad thing.

You have a number of states moving in one direction, and a number of states moving in the other. One of the things that we saw in 2018, for instance, were a series of ballot initiatives, citizen-led ballot initiatives. The one in Florida, for instance: Florida had permanent felony disfranchisement, for all intents and purposes.

So you had 1.7 million people in Florida who could not vote because they had a felony conviction. And this is after they have served their time, they have paid their debt to society, and they were suffering what is called civic death. And the citizens got together, and I think something like 65% voted for Amendment 4, that provided a pathway for the right to vote for 1.4 million of those returning citizens. That is amazing and incredible. And of course, the Republican legislature and Republican governor have worked really hard to undermine that citizens’ initiative.

In Michigan, you had a ballot initiative to have a nonpartisan redistricting commission to get rid of the extreme partisan gerrymandered districts, and to realize that extreme partisan gerrymandering—where you end up with these really weirdly drawn congressional districts that are designed to create additional power in one set of communities and diminish the power in another—and said, “No, this is about one person, one vote; this is about equal representation.”

And this is the thing that I think consistently gets missed: Americans will fight back.

JJ: That was Carol Anderson, speaking with CounterSpin in February of 2020. Her latest book is  One Person, No Vote: How Voter Suppression Is Destroying Our Democracy; it’s out now from Bloomsbury.