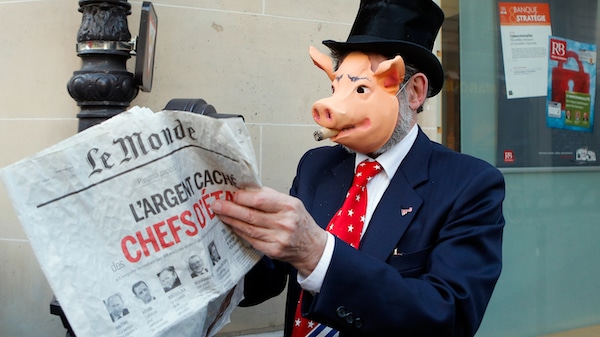 Money laundering and cooking the books are usually treated as separate things when discussing white collar crime, even though the latter is often the mechanism through which the former is carried out. In the world of corporate banking, hedge funds and the host of satellite market services that underpin the financialized economies of the U.S. and U.K., tax haven jurisdictions allow money flowing in from all sorts of highly profitable illicit activities, shell companies and brass plate trusts to become an asset on the books of massive institutions like JPMorgan Chase, Deutsche Bank, and HSBC; all of which have been embroiled in massive money laundering scandals.

Real account holders’ names escape regulatory scrutiny thanks to the anonymity the current rules of the game allow them to enjoy. But, that might soon come to an end if a bill passed by the House of Representatives makes it past the Senate. The Anti-Money Laundering Act was tucked inside the House’s version of the 2020 National Defense Authorization Act and mandates the creation of a “beneficial ownership” record which would force the public disclosure of any U.S.-based company’s ownership.

The thought of the real names behind the plethora of shell companies and other shady instruments of finance being exposed must have sent a shiver down the back of more than one Senator, because the bill has been excised from the Pentagon’s annual budget authorization by the upper chamber, placing the proposed legislation in a state of limbo for the time being.

A beneficial ownership record would seriously curtail tax haven entities from operating in complete darkness, as they do now. The U.K. created its register in 2016 and Europe has been directed by Brussels to have one up and running by 2020. The legislation, which has earlier iterations known as the Illicit Cash Act and Corporate Transparency Act, was passed by a large majority in the lower house and reportedly has widespread support in the Senate, as well.

Transparency is too risky

Despite the already semi-opaque structure of the current bill, members of the Senate still want more. Unlike the U.K. version, which makes the data publicly available, the U.S. version would be controlled by the Treasury Department’s Financial Crimes Enforcement Network (FinCEN) and only be accessible to law enforcement agencies.

The Senate Banking Committee has, reportedly already agreed on the bill’s language and only the funding source is a question mark, at this point. It is clear that the legislation has accrued momentum and will likely pass at some point. 42 Attorney Generals have urged the federal government to pass it and in June, the U.S. Chamber of Commerce sent a letter in support to the Banking Committee.

As usual, the words sound very nice and a lot of people seem to be doing the right thing. But, history does not show a promising outcome. The measures put in place after 2008 in order to restrain the impulses of the “too-big-to-fail” financial institutions are being manipulated and, in some cases, completely ignored. Banks like JP Morgan Chase and HSBC – two of the biggest money launderers on earth – all seem to have a gentlemen’s understanding with the Federal Reserve about how the new rules are applied.

After the crash of 2008, the Federal Reserve instituted so-called “stress tests” on banks and other financial institutions that had then been deemed “too big to fail”. A formal list has been compiled since 2011 and they are now called by their official designation, Global Systemically Important Financial Institutions (G-SIFIs).

These banks and insurers must report their levels of exposure to the Fed, which then assesses the need for more or less control over the institution’s financial activity or penalties through the results of a stress test (simulations run on their balance sheets). An annual stress test report is published by the Fed, which includes the capital requirements of each institution. But, it has now come to light that virtually all of the G-SIFI banks – JP Morgan Chase, HSBC and Deutsche Bank among others – have been cooking the books to fool the stress test in order to reduce their capital requirements.

A “bombshell” report by the American central bank reveals that the Fed is aware of the pattern being followed by the big banks to game the stress test; which they do by magically dropping their over-the-counter derivatives exposure by Trillions of dollars every fourth quarter and just as magically having it restored by the end of the following first quarter of the next auditing period. The practice, which seems to be tolerated by the Fed “as a legitimate means of reducing its capital requirements” makes a mockery of the entire point for stress testing, which is to mitigate systemic risk.

Where is resistance to structural violence of capitalism?
It is late, but it is early morning if we insist a little