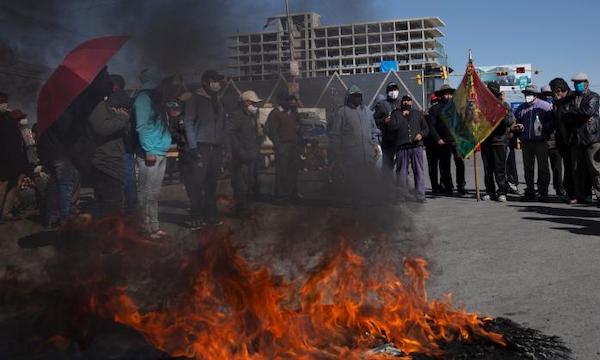 For the first time since taking power in a coup last November, Jeanine Áñez’s “interim” regime in Bolivia has been rocked by a wave of popular mobilisations, road blockades and strikes. Beginning in response to the Supreme Electoral Tribunal (TSE) of Bolivia’s decision to postpone elections for a fourth time this year—from 6 September to 18 October—the conflict quickly developed beyond the initial demand for a reinstatement of the original election date into calls for the immediate resignation of Áñez.

On 28 July, tens of thousands took to the streets of El Alto, the predominantly working-class and Indigenous city that overlooks La Paz, in a mobilisation called by the Bolivian Workers Centre (Central Obrera Boliviana, or COB), the country’s chief trade union federation, together with other worker, peasant and Indigenous organisations (gathered under the title of the “Pact of Unity”) to demand the TSE hold a general election on 6 September.

Three days later, after negotiations between the Pact of Unity, the TSE and the Áñez regime broke down, an indefinite general strike was called and, on 3 August, road blockades in more than 75 departments began. Over the course of that week, demonstrators dynamited Andean passes, scattered boulders across highways and dug trenches along rural roads. By 10 August, the number of roadblocks had risen to more than 200.

The decision to postpone elections has been just one of the ways in which the Áñez regime has used the smokescreen of the pandemic to further her administration’s agenda. On 17 March, Áñez imposed a militarised quarantine and called for “fasting and prayer” to fight COVID-19.

“Not only have the hospitals collapsed with significant casualties among healthcare workers, but the cemeteries and crematoriums have been overwhelmed. Access to medicine is a luxury, and Bolivia is in short supply”, Juana Runa, a member of the Revolutionary Workers League—Fourth International, says over the phone from La Paz.

Infections in the country are dramatically increasing. It’s a complicated situation because thousands of families are driven by hunger to go out and work. Áñez and her government have begun to relax the quarantine at great cost; they are doing it in a totally irresponsible way because they have systematically refused to implement mass testing. This is criminal, considering that we have one of the most precarious health systems in the region and today public health is beginning to collapse. In fact, quarantine has been the only ‘sanitary’ measure imposed by the coup regime.”

Meanwhile, in the city of Cochabamba, people have been lining up to buy chlorine dioxide, a bleach-like substance, after the Senate in mid-July approved its use to treat COVID-19, despite warnings from the country’s health ministry. Hundreds of cases of chlorine dioxide poisoning have since been reported.

The easing of lockdown measures hasn’t helped an already stuttering economy. The World Bank forecasts a contraction of 3.4 percent in 2020, which would be the biggest GDP drop in 36 years. Since the crisis began, 38 percent of the country has lost all income, while 52 percent has lost a significant portion. The Economic Commission for Latin America and the Caribbean predicts that by the end of the year, a further half a million Bolivians will be driven into extreme poverty.

Meanwhile, the Áñez regime has been supporting the sections of agro-industrial, extractive and multinational capital it represents. The regime has been preparing the ground for the privatisation of much of Bolivia’s state-owned capital—most of which was built up during the fourteen years of Movement for Socialism (MAS) rule under Evo Morales—through a mixture of bankruptcy, corruption and suspension of infrastructure projects. Plans to process the country’s lithium supplies within Bolivia have been suspended. So too have urea and ammonia plants in the Cochabamba region, a jewel in the crown of Bolivia’s state-run gas company, Yacimientos Petrolíferos Fiscales Bolivianos. A new tram system for Cochabamba has been abandoned with the tracks and stops all laid in the ground—the administration has refused to pay for the release of the carriages from Chilean customs, and now they are being auctioned.

Since the administration came to power, more than 9 million hectares of jungle and forest have been handed to agribusiness and the cattlemen of the Department of Beni (Áñez’s home province). The appointment of former paramilitary leader and agro-industrialist Branko Marinković (known for his involvement in an attempted coup against the Morales government in 2008, and who had remained in exile until the coup of November 2019) to the Ministry of Development and Planning on 4 August represents a hardening of this vanguard section of agribusiness within the administration; it will try to further expand the sector’s access to Indigenous land in the coming months.

Under the cover of the pandemic, the regime has also intensified its attacks on political opponents. Forrest Hylton, writing in the London Review of Books, calls it the “paranoid style” of politics that characterises the far right: “Áñez—like Bolsonaro and Trump—peddles conspiracy theories about enemies in the media, government and civil society. They allegedly follow Morales’s directives, and plot her overthrow through terrorism and drug trafficking … Such theories erode the credibility the regime may have, but widen the net of potential adversaries to be persecuted”. The regime has relied on prosecutors to bring corruption, sedition and terrorism charges against dozens of former MAS officials and supporters. Left-wing journalists have been harassed and detained. Dozens of Indigenous-operated radio stations connected to social movements and the MAS have been shut down.

Throughout the present crisis, the administration has escalated threats of violence against protesters. In an interview on 7 August, Government Minister Arturo Murillo, when asked by a journalist why he hadn’t carried out military intervention against the blockades, said: “We are trying to avoid a civil war in the country … You’re not just going to shoot everybody [although] that would be the politically correct thing to do”. Soon thereafter, on the weekend of 8 and 9 August, fascist paramilitaries from the Santa Cruz Youth Union and Resistencia Juvenil Cochala (from Cochabamba) attacked road blockades in their respective cities, injuring dozens.

On 10 August, following the weekend of violence, troops were sent into the streets of the capital La Paz, Cochabamba and Santa Cruz. The same day, a convoy of trucks escorted by soldiers and army helicopters was used to cross blockades. But the regime’s reliance on brute force and intimidation is a sign of weakness rather than strength, papering over the ineptitude and internal divisions within its ranks.

Over a dozen corruption cases have emerged in the past six months in state oil, telecommunications and aviation firms. In May, Health Minister Marcelo Navajas was arrested and fired after Bolivia imported 179 ventilators—which doctors later found were incompatible with intensive care units—for almost $5 million, nearly three times their market price.

“There is a crisis in the coup bloc: the non-existent legitimacy of Áñez and her racist government strengthens the role of the armed forces. There are even rumours, encouraged by explicit threats from high-ranking representatives of the military, of a second phase of the coup and the eventual closure of the parliament”, Juana says. Moreover, the reluctance of Murillo to use the armed forces against the Indigenous-majority population—many of whom form the lower ranks of the military—is a sign of how delicate the balance of forces is. Fraternisation between soldiers and the various Indigenous-led social organisations has been reported throughout La Paz and Cochabamba since the military returned to the streets. Beneath the veneer of European suits, military uniforms and Christian symbolism lies a regime which lacks popular support from Bolivia’s Indigenous population.

The MAS continues to play a key role in propping up the regime. Despite the ongoing persecution of its leaders, members and apparatchiks, the parliamentary arm of the party—which controls two-thirds of the Plurinational Legislative Assembly (ALP)—continues to negotiate with the Áñez regime, providing it with a stamp of legitimacy. “The collaboration of the MAS with the coup leaders has allowed them to present themselves as the saviours of democracy”, Juana says. True to form, on 13 August, the ALP passed a law, drafted by the MAS and the TSE, enshrining 18 October as the election date. The law states that anyone who intends to change the date of the elections will be charged.

“The haste with which the MAS accepted the date the coup leaders set for elections was a response to the tendencies that the conflict was beginning to show”, Juana says.

In other words, a tendency toward radicalisation, where the union and social movement bureaucracies aligned with the MAS began to lose control of the mobilisations.

On 14 August, several thousand workers, Indigenous people and students mobilised in El Alto to reject the agreement. Led by the federation of neighbourhood councils, the Tupac Katari organisation, the Federation of Trade Unions and Transport of El Alto, the Federation of Bartolina Sisa Women, delegations of mining unions and various youth organisations, among others, the cabildo (the Bolivian term for open-air assemblies) called for the resignation of Áñez, elections to be held on 6 September, an end to the political persecution of opponents of the regime, the defence of public infrastructure to solve the economic and health crisis and the indefinite continuation of the blockade until these demands are met. The leaders of the COB and the Pact of Unity, both of whom called for a demobilisation of the blockades, were called traitors.

Juana says there was visible anger towards the MAS-negotiated agreement and the COB’s calls to demobilise. The Ayllus from Norte Potosí fiercely criticised the COB’s passive approach to the strikes and blockades, one that failed to mobilise the majority of rank-and-file members (relying instead on paid officials to staff picket lines). In some places, such as Cochabamba, the mobilisations on 14 August were used to strengthen the pre-existing blockades. For a while, they even rejected the calls to demobilise. And infuriated residents of Cochabamba reportedly grilled their union leaders for hours before finally submitting to them.

“It is clear that the coup regime will not act with the same leniency that the union bureaucracy and the MAS act with toward the coup plotters”, Juana says. By limiting the creative energy of the Bolivian working classes—trying to defeat the Áñez regime at the ballot box, rather than in the streets—the MAS don’t only disarm the people who want to fight the regime; they also disarm themselves and invite further repression.

With many of the blockades now falling into line with COB and MAS directives, those who choose to stay and fight will face harsh repression not only from the Áñez regime, but from the fascist paramilitaries that have been unleashed in recent weeks. It remains an open question whether the expected clashes will lead to demoralisation or a renewed cycle of popular mobilisations that match, or even surpass, those of the past fortnight. But the threat of repression is very real. On the same evening that the legislation was passed, a bomb went off outside the headquarters of the COB and the Federation of Peasant Women (“Bartolina Sisa”) in La Paz. Fortunately, no-one was injured.

One cycle of political contestation has now closed, and another cycle is now opening. What happens in the coming days and weeks will have a decisive impact on the balance of political forces in the country.

You can’t understand capitalism without race
Detainees during the Pandemic