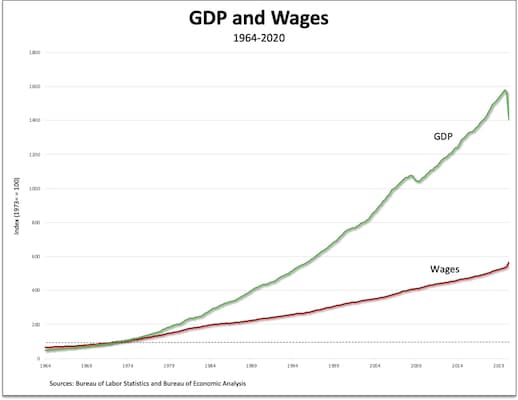 The phrase, which was used in the early nineteenth century to describe the the spoils system of appointing government workers, accurately describes the American economy today.* And it’s pretty clear who the victor is, and it’s not the working-class.

Instead, a small group at the top have come out as the victor—and that’s been true for decades now.

How do we know?

Well, all we have to do is look at the growing gap between the amount produced by American workers and what they received in their wages. Gross Domestic Product (the green line in the chart above) grew by a factor of almost 16 from 1973 onward while workers’ wages increased by a bit more than 5 before the COVID Depression.

So, American workers only received back in the form of wages a small percentage of the increased amount they produced. The rest went to their employers.

The result has been an enormous rise in U.S. corporate profits (before tax, without inventory valuation and capital consumption adjustments)—particularly evident in the trendline fitted to the data in the chart above.

The employers, in turn, transferred a portion of those profits to the Chief Executive Officers of their corporations.

Exorbitant CEO pay is a major contributor to rising inequality that we could safely do away with. CEOs are getting more because of their power to set pay—and because so much of their pay (about three-fourths) is stock-related, not because they are increasing productivity or possess specific, high-demand skills. This escalation of CEO compensation, and of executive compensation more generally, has fueled the growth of top 1.0% and top 0.1% incomes, leaving less of the fruits of economic growth for ordinary workers and widening the gap between very high earners and the bottom 90%. The economy would suffer no harm if CEOs were paid less (or were taxed more).

And according to my calculations, the top 1 percent in the United States owns (as of 2014, the last year for which data are available) 62 percent of corporate equities, which has been climbing since the late 1970s. Meanwhile, the share of the entire bottom 90 percent has been falling, and is now only 11 percent.

So, it’s really only the small group at the top that is in a position to “share in the booty” by receiving a cut of corporate profits in the form of CEO pay and stock dividends. They’ve occupied the position of victor for decades now, and to them belong the economic spoils.**

Everyone else is forced to have the freedom to try to get by on their slowly rising wages—and to watch with both fascination and horror the ongoing spectacles in corporate boardrooms and the stock market.

*”To the victor belong the spoils” is attributed to Senator William Learned Marcy of New York who, in 1832, defended Andrew Jackson, whose campaign against President John Quincy Adams was seen partly as a vendetta against Adams, and whose conduct and remarks when taking office seemed to justify the association of Jackson with the spoils system.

**Just yesterday, in the midst of the pandemic and the worst economic downturn since the Great Depression of the 1930s, the U.S. stock market reached a new high (according to the Standard & Poor’s 500 index).