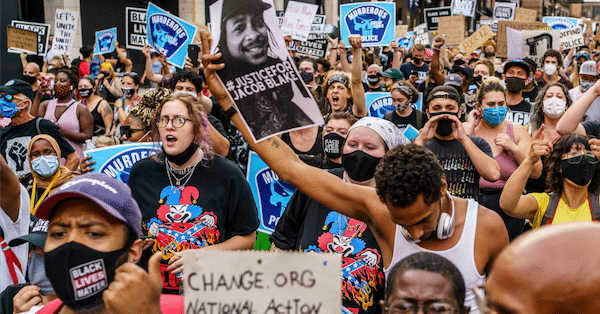 Protesters march near the Minneapolis 1st police precinct during a demonstration against police brutality and racism on August 24, 2020 in Minneapolis. (Photo: Kerem Yucel/AFP via Getty Images)

From Washington, D.C. to Denver to New York City to Minneapolis—where George Floyd was killed at the hands of police just three months ago—massive demonstrations and marches erupted Monday demanding justice for Jacob Blake, a 29-year-old father of six who was shot multiple times in the back at point-blank range by a Kenosha, Wisconsin police officer as three of his children watched from the back seat of his car.

With Blake reportedly in stable condition at a nearby hospital, protests also kicked off for the second consecutive day in Kenosha as hundreds rallied outside the county courthouse while police officers surrounded the building. The Kenosha demonstrations continued late into the night Monday, deterred neither by the 8 pm curfew imposed by local authorities nor the tear gas and projectiles fired by city police.

As the Washington Post reported, “Monday evening’s demonstration started around 6:30 pm with a few hundred people gathered outside the Kenosha County Courthouse. The scene was peaceful, with the crowd chanting and holding signs. But as the citywide curfew neared, sheriff’s deputies appeared in riot gear.”

“At 8 pm, two military vehicles rolled to the square as police told the crowd to disperse,” the Post noted. “When no one budged, police unleashed tear gas, and protesters hurled water bottles and set off firecrackers. Some people spray painted government buildings and set fire to dump trucks used to curb traffic.”

In an interview with local reporters late Monday, Justin Blake, Jacob’s uncle, said his family is “encouraging people to protest peacefully, not to be destructive,” as some smashed the windows of businesses across the small Wisconsin city.

“We want justice,” Justin said, “and we want proper justice.”

A crowd of protestors and a line of police officers outside of the Kenosha County Court House pic.twitter.com/vsTJeJ3tOY

— Read Parable of the Sower by Octavia Butler (@JoshuaPotash) August 24, 2020

Hundreds of all ages are demonstrating in Kenosha outside of the courthouse. While investigations continue to play out, one thing we do know is there’s a lot of pain in the community and beyond over what feels like a story they’ve heard before. #JacobBlake pic.twitter.com/uVFJaKv8JE

Cellphone footage showing a Kenosha police officer firing seven shots into Jacob Blake’s back as he attempted to get in his vehicle Sunday evening drew nationwide condemnation from lawmakers and civil rights advocates, who decried the shooting as further evidence of the desperate need for systemic, nationwide policing reforms.

“The video that came out of Kenosha is absolutely horrific,” one Madison demonstrator told the Wisconsin State Journal. “I don’t understand how people can watch it and not be here.”

Allyn Brooks-LaSure, executive vice president for communications at the Leadership Conference on Civil and Human Rights, said in a statement Monday that “we are outraged at yet another act of police violence and brutality with the shooting of an unarmed Black man.”

“This tragic shooting underscores the immediate need for a new vision of justice that respects human life, ensures accountability, and redefines public safety—to shift resources away from criminalization and policing, and toward investments in social supports and community-driven solutions,” Brooks-LaSure continued. “We join the nation in keeping Blake and his family in our hearts and hope for his recovery.”