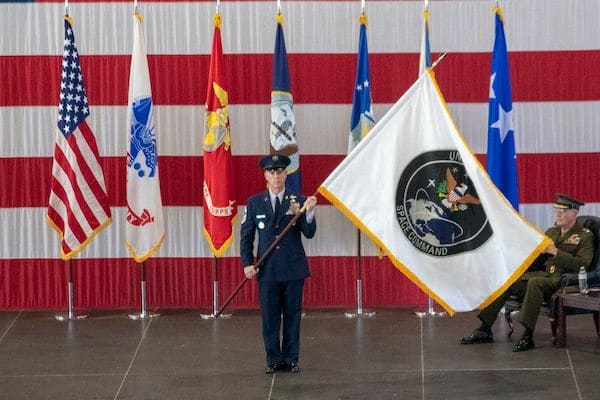 U.S. Space Command was created in 1985 by U.S. President Ronald Reagan to manage the “Star Wars” program: a U.S. Cold War plan to use space supremacy to menace the Soviet Union with orbiting battle platforms, powered by nuclear reactors and loaded with space-based weaponry like hypervelocity guns, particle beams and lasers.

In the post-Cold War era, SPACECOM was dissolved. However, with U.S. business and political elites from both parties of the rich united around launching a new cold war with China and Russia as the targets, U.S. interest in weaponizing space has renewed. Thus, SPACECOM was reactivated in 2019.

SPACECOM is temporarily located at Peterson Air Force Base in Colorado Springs. Since May, a scramble has been underway with 31 cities now clamoring to be the new headquarters location, something that would bring with it multiple billions of dollars annually to expand space-related war industries. State and local politicians from both parties are slobbering over the prospect.

In New Mexico, a quintessential “blue state” that is already neck deep in the space-oriented arms race, liberal politicians are thirsty to attract the lucrative “opportunities” associated with war. Both Democratic Senators, all three Democratic Representatives, along with Governor Lujan Grisham and Albuquerque Mayor Tim Keller–the later two associated with the “progressive” wing of the party–are all desperately lobbying the Air Force to land SPACECOM.

U.S. Secretary of State Mike Pompeo recently toured Europe announcing that the United States is going full throttle to carry out a global confrontation with China. Pompeo does everything he can to turn the nations of the world against China, and even goes as far as calling for the overthrow of the Chinese government. A confrontation between the U.S. and China would almost certainly plunge humanity into world war.

In preparation for “major power” conflict in coming years, the Pentagon and U.S. government are prioritizing advancing technologies and capabilities to dominate and control space, with the belief that conquering the “ultimate high ground” of space will allow them to win the wars below.

Reactivating SPACECOM to coordinate space operations between all branches of the U.S. military is a big part of that. Another part was last December’s inauguration of the sixth and newest branch of the military, called Space Force.

While the Space Force was created under the Trump administration, it was only made possible with the enthusiastic bipartisan passage of a historically high $738 billion military budget–which included an increase of $22 billion over the previous year. The war budget received backing from 80 percent of House Democrats and 82 percent of Senate Democrats.

This terrifying publication begins chapter one/page one with a terrifying 1958 quote from then U.S. Senator and future President Lyndon B. Johnson: “There is something more important than any ultimate weapon. That is the ultimate position–the position of total control over the Earth that lies somewhere out in space.”

The irrational quote may be 62-years-old, but its current use by the U.S. military shows that extreme, militaristic thinking is never out of style. Indeed, the rest of the document is an equally bizarre body of ideas on the need to obtain space supremacy (i.e. “total control of the Earth”), in open violation of international law.

On page 16, it states that “space must be defended from those who will seek to undermine our [U.S.] goals in space.” In other words, the U.S. will have total freedom of operations in space and aggregate to itself the right to deny other countries access to it.

The chapter on Employment of Space Forces lets the reader know that “the coercive value of military spacepower is not limited to great power competition. Military spacepower may still have a coercive impact on nations or actors who lack significant space dependencies by projecting power from the space domain.” In other words, the “coercive” effect of the United States’ asymmetric military advantage in space will be flexible enough to leverage against all countries and “actors” big and small, poor and less poor, high-tech and low-tech.

“The ability to legally transcend [in outer space where aviation law doesn’t apply] the most remote and protected national boundaries provides a unique opportunity to enable lethal and non-lethal effects against terrestrial targets (Pg. 32),” the document matter-of-factly states.

Quotables like those above are what led author and professor Karl Grossman recently to describe Spacepower as the space Mein Kampf of the U.S. military.

The entire doctrine of control and domination flies in the face of all international space law. The Outer Space Treaty, written in 1967 and ratified by 132 countries including the United States, declares that space is to be used for peaceful purposes and not enduring war.

China and Russia, along with Canada, have led efforts for decades to expand the Outer Space Treaty to ban all weapons in space, not just nuclear weapons and “other kinds of weapons of mass destruction,” as stated in the original 1967 treaty. Year after year, the United States has blocked those efforts. This shows who the true aggressor is.

The significance of the new Space Force military doctrine cannot be overstated. In spite of the appearance of Republican/Democratic difference of opinion at election time, the doctrine will be transcendent. Whether Trump or Biden wins in 2020, the Space Force doctrine is going to be operational. And Democrats have shown that they will wield all aspects of the military industrial complex just as effectively and ruthlessly as Republicans.

The threat of war is real. While arch right-wing conservatives like Pompeo are giving overheated anti-China stump speeches across Europe, “liberal” politicians like those in New Mexico are on the backend eagerly maneuvering to intensify their role in the space technology arms race, i.e. in military preparations for WWIII.

We need to push back against the lunatic militarism and wars of both capitalist parties!