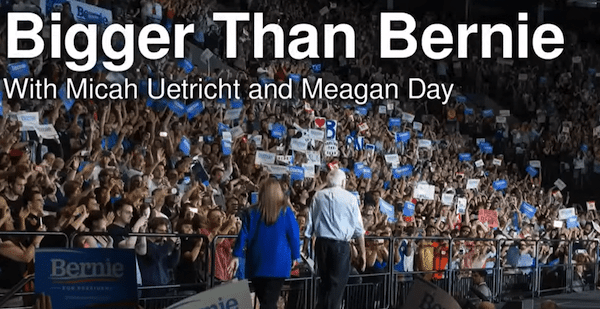 Bigger than Bernie How We Go from the Sanders Campaign to Democratic Socialism by Meagan Day and Micah Uetricht, Verso

If I were the sort of reader who routinely jotted down comments in the margins of a book, then my review copy of Meagan Day’s & Micah Uetricht’s lively, informative and useful book, Bigger Than Bernie, would by now contain at least half-a-dozen entries–all saying the same thing:

“So why does the Democratic Socialists of America (DSA) not declare itself as an explicitly  ecosocialist movement?”

Day and Uetricht are both leading members of the DSA–originally formed in 1982, as a mainly social democratic organisation. They are both active participants in the organisation’s work, not simply reporters or observers, and are thus well-placed to inform readers about the exciting growth of this democratic socialist movement–which, as a result of its involvement in the two Democratic Party presidential primary campaigns waged by Bernie Sanders since 2016, has grown to a membership of almost 70,000.

If nothing else, the DSA has thus made some important–and impressive–initial strides towards achieving the main aim of the subtitle of their book: How We Go from the Sanders Campaign to Democratic Socialism. The main aim of the DSA is explicitly stated as being to create a mass, multi-racial and working-class movement –one that is truly ‘Bigger Than Bernie’.

“Day and Uetricht put flesh on Sanders’s call for a ‘political revolution’ which they see as not only critical to the success of the Sander’s campaign, but the revitalization of class struggle politics and organizing in the US.”

For this alone, it is a book that deserves to be read and debated–not just by those interested in developments in the US, but also by socialists and ecosocialists in the UK, given the wrecking of the Corbyn project. Its lessons should also prove particularly useful for the project currently being taken forward by Socialist Resistance and Mutiny, to form a broad revolutionary Anti-Capitalist Resistance.  In addition, for regular up-dates on the DSA project, its debates and its continuing activities, it is worth consulting Jacobin, their lively magazine.

Bigger Than Bernie examines all that democratic socialists in the U.S. have taken part in–and achieved ­– in the years since 2016: for instance, successful community campaigns in Chicago, California’s East Bay, and in New York City.

But, arguably even more importantly, it attempts to go beyond analysis of what has been achieved, to pointing out how to build a really broad and radical movement that will go much further in the near future–with the clear aim of achieving permanent non-reformist change.

These developments are the result of the DSA’s deliberate decision to be much more than electoral campaigns to get radicals such as Bernie Sanders, Alexandria Ocasio-Cortez (AOC), Rashida Tlaib, Ilhan Omar, Julia Salazar and Tiffany Cabán elected to various bodies.

Instead, as their book makes clear, the DSA is about developing a militant class-struggle elections-and-politics approach, that is both electoral and non-electoral, and that continues–and continues to build–between elections. The book makes clear that the DSA views such electoral campaigns as helping to grow popular struggles and movements which they see as the real drivers of fundamental change.

However, as Andy Sernatinger pointed out in an article in the Tempest magazine earlier this month, it seems that both the national leadership and the local chapters of the DSA have been unable to play leading organisational roles in either growing community concerns over Trump’s mishandling of the COVID-19 pandemic, or in the huge #BlackLivesMatter uprisings following the murder of George Floyd:

Day and Uetricht make it clear that the aim of the DSA is to build a broader left movement in the US, by providing a home for “multiple strands of left-wing ideology…[and] thousands of new socialist activists.” (p.60). This unique approach–and the shock of Trump’s victory in 2016–has undoubtedly been behind the spectacular growth of the DSA over the past 4 years. The DSA has, in particular, been able to attract a membership that is often both younger and more radical than more traditional U.S. socialists.

As a result, after Trump’s victory, the DSA and its activists were involved in such non-electoral actions as the protests against Trump’s inauguration, the Women’s March against Trump’s overt misogyny, and the protests against the Muslim ban which resulted in the shutting-down of several airports. All of these can be seen as growing out of the Bernie Sanders electoral campaigns.

But this aim of building a really broad class-struggle movement–that both fights elections and actively participates in social and community projects and industrial strikes–seems to be missing a real opportunity to make the DSA an even broader and thus bigger movement than it already is.

Although the phrase ‘democratic socialism’ appears throughout the book, the term ‘ecosocialism’ does not make one appearance in its entire 248 pages. This seems a strange oversight, as it isn’t as if the authors are unaware of the Climate Crisis–and of the urgent need for action to tackle it before it’s too late.

In fact, in December 2018– long before the book was published–in an article in Jacobin, Meagan Day made a particular point of underlining the impacts of the Climate Crisis on ordinary people, by referring to Bernie Sanders’s ‘Racial Justice Plan’. This document identifies 5 categories of racial injustices in the U.S.–one of them is ‘environmental violence’ which, as she points out:

“refers to the destruction of our environmental commons and the pollution of our air and water, which impact poor communities of color the most, as demonstrated by the Flint water crisis and the diagnosis rates in Louisiana’s predominately black ‘Cancer Belt.’…The platform calls for regulation and prosecution of corporate polluters, and a rigorous commitment to ending environmental degradation and climate change.”

In the book itself, there are three–albeit brief–references to global heating and the Climate Emergency in the Introduction, where the authors clearly state that:

“We have a once-in-a-lifetime opening to reshape the world for the many, not the few. In particular, given the impending reality of catastrophic climate change, we have no choice but to take advantage of this opening if we don’t want to live out our days in a dystopian nightmare. Capitalists are not only exploiting the vast majority of people and maintaining an order based on privatization and austerity that engenders needless suffering–they are also driving the planet to the brink of disaster. To pull it back from the precipice, we have to go toe-to-toes with the industries that are destroying the earth, which means our climate politics require a strong dose of class antagonism. If we want a habitable planet and a future for humanity, nothing less that democratic socialism will do.” (pp.xvii-xviii) [my emphasis]

A brilliant paragraph, that neatly sums up the multiple failures and barbarisms of capitalism. But, instead of concluding–on the basis of that excellent overview–that nothing less than democratic eco socialism will do, the ‘eco’ element fails to appear explicitly.

In Chapter 5, the authors also make several references to the Climate Crisis, and provide a useful examination of AOC’s Green New Deal (GND), which they see as,

“a declaration of class war,…to meet all of the power demand in the United States with renewable and zero emissions energy” and make the point that the GND rightly “breaks from the dominant approach of fighting climate change and environmental destruction in the last few decades: individualistic, consumer-focused, guilt-laced appeals to save a polar bear drifting out to see (sic.) on an ice floe by using eco-friendly light bulbs.” (p.165).

They go on to conclude that chapter by make the following valid point:

“If anyone but the ultra-wealthy on this planet is to avoid the apocalyptic effects of climate change, we will need the Green New Deal. A massive restructuring, retooling, and reprioritizing of every aspect of our society is required to save the planet.” (p.170).

Yet it as if they have never heard of–let alone read–leading U.S. ecosocialists such as John Bellamy Foster and Paul Burkett!

By openly embracing ecosocialism–and putting the Climate Crisis much more to the forefront of its campaigning–the DSA would undoubtedly attract a wider audience, as the U.S. (like so many other countries around the world) continues to suffer an increasing number of extreme weather events.

Right now, of course, there are unprecedented wildfires in California while, on the south-east coast, Texas and Florida are bracing themselves for TWO tropical storms likely to hit at the same time: a phenomenon that has never been recorded before.

As they say in their Conclusion:

“We deserve the world. And we won’t have it until capitalism ends…We’ve been handed this task at a time when the stakes are higher than ever, with…climate change poised to wreak havoc across the planet.” (pp.214-215).

The Fourth International has been explicitly ecosocialist since 2010. So, come on the DSA: time to catch up, to put policies and actions on the Climate Crisis to the top of your agenda, and become the Democratic Ecosocialists of America!