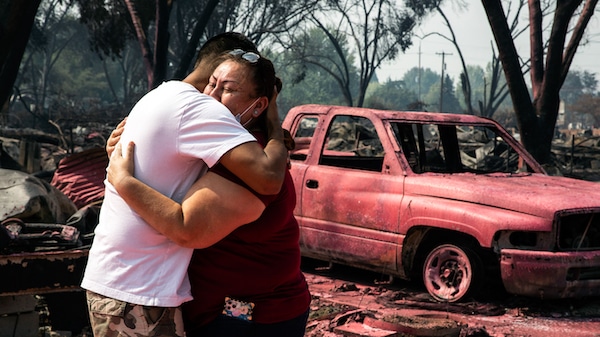 Maria Centeno, right, from Mexico, is consoled by her neighbor Hector Rocha after seeing their destroyed mobile homes at the Talent Mobile Estates, Thursday, Sept. 10, 2020, in Talent, Ore., after as wildfires devastate the region. (AP Photo/Paula Bronstein)

More than half a million Oregonians have been forced to flee their homes, as wildfires continue to ravage the West Coast of the United States. Amid record-breaking temperatures, the wildfires, which have charred one million acres of land, have caused the sky to turn a terrifying shade of red, with many comparing it to Mars, hell, or the apocalypse. Air quality in Portland, the state’s largest city, is currently the lowest in the world, below even that of infamously polluted cities like Delhi and Beijing.

The state’s Democratic governor Kate Brown did not mince words when advising what to do. “Get the hell out,” she told her fellow Oregonians. While Brown described the fires as “unprecedented,” she also warned that they “will not be a one time event.” “Unfortunately, it is a bellwether of the future,” she said.

We are seeing the devastating effects of climate change in Oregon, on the entire West Coast, and throughout the world.

Firefighters are having a great deal of trouble dealing with blazes of this size and ferocity, despite receiving support from the rest of the country. A group of Mexican firefighters also arrived in the state yesterday, keen to help their American compatriots. One major reason they are having such difficulties combatting the blazes, the Portland Tribune noted deep in one article, is that many of the state’s largest firefighting aircraft are not available because the Department of Defense has sent them to Afghanistan to fight in a 20-year-old war. Six Chinook helicopters, for example, have been redeployed to the Asian nation, critically undermining both rescue and firefighting missions at home.

The Defense Department’s decision is the latest example of the skewed priorities of the U.S. government when it comes to protecting its citizens. More than twice as many people have already died in California alone from the summer’s wildfires than Americans in Afghanistan all year. The occupation of Afghanistan will turn 20 years old next month, and, with troops removals being blocked, shows no sign of coming to an end soon. Even before the latest increase, the United States’ military budget already rivaled that of the rest of the world combined. In July, both Congress and Senate rejected a bill calling for a modest reduction in defense spending, overwhelmingly voting against it.

What the government could have done to improve the country with the savings is considerable. The National Priorities Project calculated that a ten percent cut in military spending would be enough to end homelessness in America, fund free college for two million students, convert the U.S. to renewable energy, hire 900,000 new teachers, or send two more $1,200 checks to every American.

While Oregon is among the hardest hit, states across the western United States are feeling the impact of colossal wildfires. In Washington state, more acres were burned on Monday alone than in 12 of the past 18 years of forest fires, according to Governor Jay Inslee, with the large majority of the state under a red flag fire warning.

Meanwhile, the fire season has been particularly harsh in California, with six of the state’s twenty largest fires in recorded history occurring this summer. Authorities have been critically short on firefighters as the prisoners it normally uses to tackle the blazes have been locked down because of a COVID-19 epidemic raging through the state’s prisons. Inmates are paid between $2.90 and $5.12 per day, plus $1 per hour to risk their lives, and are barred from applying for jobs in the fire department once they are released.

Oregon has fared relatively well at limiting the spread of the coronavirus, with fewer than 500 deaths statewide. However, with half a million people fleeing their homes, it is feared that the communal indoor spaces they are being relocated to will become hotbeds of transmission.

Governors like Brown and Inslee, as well as scientists, have explicitly framed the fires within the context of man-made climate change. “[The] West is on fire. Air can’t be breathed. Sky is pink. A half million [are] fleeing Oregon. An environmental reckoning has come. Whatever we call it–Green New Deal, Climate Revolution, End of Fossil Fuels–we must radically alter the way we live, or our lands will be uninhabitable,” wrote former Secretary of Labor Robert Reich.

Yet corporate media have been far less willing to discuss global warming. In a 1,700 word article entitled, “Extreme Heat Turns State Into a Furnace,” for instance, the New York Times failed to mention climate change even once. Perhaps more alarming was the choice of outlets across the spectrum to illustrate the historic and deadly September heatwave with happy pictures of Americans enjoying themselves at the beach, completely missing the severity of the climate crisis.

The diversion of crucial firefighting resources away from high risk areas of the United States so they can be turned into weapons for a 20-year-long war on the other side of the world is an axiomatic example of the priorities of the United States government. While the rhetoric of war planners is all about keeping Americans safe, the huge concentration of resources devoted to conflicts in the Middle East, it could be argued, is actually undermining Americans’ safety at home.