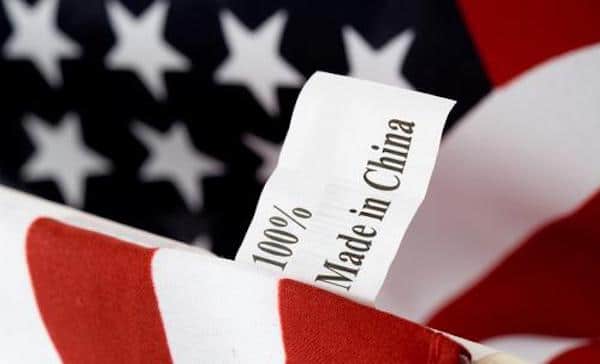 American flag made in China

Democrats in the Senate announced September 17 a massive spending bill aimed at stepping up U.S. hostility towards China to the tune of $350 billion. Introduced by leading imperialist war hawks Chuck Schumer and Bob Menendez, the legislation is intended to shore up U.S. dominance in strategic sectors of the world economy through huge government subsidies, as well as bolstering ongoing efforts to politically destabilize China.

The centerpiece of the Democrats’ proposal is a $300 billion fund to subsidize science and technology development. This in all likelihood will mean a massive payday for some of the biggest tech firms in the country. An additional $16 billion is earmarked just for the semiconductor industry, a field where Chinese firms play a particularly prominent role.

Strengthening these industries is one of the core goals of the Pentagon’s “Great Power Competition” doctrine, which identifies all-out confrontation with China (and Russia) as the overarching goal guiding U.S. military and foreign policy in the 21st century. U.S. aggression against China is constrained by the fact that U.S. corporations’ supply chains tend to be heavily dependent on China’s manufacturing sector. These subsidies aim to break down this key roadblock on the path to war. While semiconductors and other high-tech goods are of course valuable to the civilian economy, they are also crucial to the U.S. military’s efforts to maintain a technological edge over the Chinese People’s Liberation Army.

Schumer and Menendez’s bill includes a host of other measures. The Senators want to single out Chinese government officials involved in policy towards the country’s northwestern Xinjiang region, offer assistance to the separatist movement in Hong Kong, and authorize an additional $125 million of military spending to assist U.S. junior partners that go along with the anti-China campaign.

Democrats and Republics in lockstep on anti-China aggression

In his announcement of the bill, Chuck Schumer’s rhetoric was indistinguishable from Mike Pompeo or Donald Trump, boasting that his proposal “Counteracts the Chinese Communist Party’s predatory trade practices and aggressive military behavior.” In July, Senate Republicans introduced their own anti-China bill, and reacted positively to the Democrats’ proposal. Explaining that he wished to incorporate the Democrats’ bill into his own, Republican Senate Foreign Relations Committee chairman Jim Risch proclaimed, “This is an American issue. This is not a partisan issue”.

But workers in the United States have nothing to gain from conflict in China. “This is all about destroying China’s peaceful economic rise because the United States wants to keep every nation on earth under its thumb.” argues Mike Wong, Vice President of the San Francisco chapter of Veterans for Peace, “It will seek to break every nation that wants to be independent of the U.S., especially a nation like China with a large economy.”

Noting that “anti-China attitudes are truly bipartisan”, Ken Hammond, professor of East Asian and Global History at New Mexico State University, said that while the Democrats and Republicans, “may have differences of opinion as to how best to enrich themselves and retain their power and privileges, they broadly agree that China’s emergence as a significant player in world affairs, and the development of China as a moderately prosperous society, constitutes an existential threat to American dominance”

At a time when tens of millions of workers are unemployed, facing eviction and even going without food, the Democratic Party wants to give hundreds of billions of dollars in handouts to the high tech industry in pursuit of their militarist agenda. On this issue of existential importance to the future of the entire world, both ruling class parties in the United States are unified in their march towards potentially catastrophic conflict.