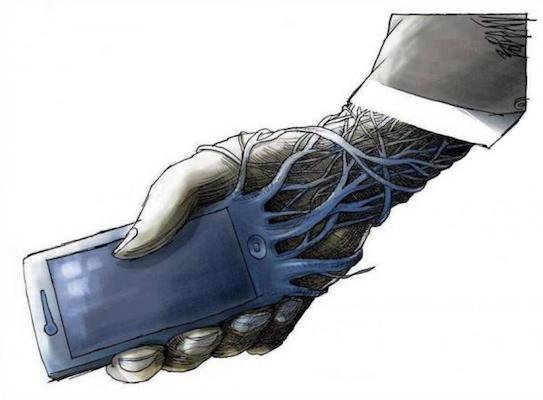 At the beginning of the 20th century, Edward L. Bernays, publicist, journalist, and inventor of the theory of public relations, considered the father of modern propaganda and the engineering of consensus in the United States, stated in one of his texts,

The conscious and intelligent manipulation of the organized habits and opinions of the masses is an important element in democratic society.

At the beginning of the 20th century, Edward L. Bernays, publicist, journalist, and inventor of the theory of public relations, considered the father of modern propaganda and the engineering of consensus in the United States, stated in one of his texts,

The conscious and intelligent manipulation of the organized habits and opinions of the masses is an important element in democratic society. Those who manipulate this unseen mechanism of society constitute an invisible government which is the true ruling power of our country.

Born in Austria and the nephew of Sigmund Freud, he applied many of his uncle’s theories and discoveries to “the science of manipulating the masses.” Now an art form for members of the “invisible government,” this science is one of the most important tools used to construct the image and symbols of U.S. capitalism.

With the advance of communications technology, the information society and internet, this knowledge has become so sophisticated that its impact is difficult to estimate.

Analysts can construct models capable of predicting a variety of attributes of unknown persons, among these, political preferences, sexual orientation, how much you trust people with whom you interact, how solid these relations are, all thanks to the information that users themselves post on the web.

Our e-mails, tweets, online presentations, Facebook likes… supply the volume of data that is generated online every day. There are more cell phones on the planet than humans. And as the use of these devices continues to grow, the amount of information available will grow exponentially.

Data on human behavior is recorded, stored and processed. Applications we use leave footprints, thousands of footprints used by Big Data corporations.

Big Data offers socio-demographic information that can be used in an electoral or political campaign and in subversive efforts directed toward an adversary. This allows forces to be mobilized to get out the vote, and above all, win over the undecided.

During Mauricio Macri’s campaign for the presidency of Argentina, his team cross-checked socio-economic data on a large scale, and with this information implemented a strategy based on micro-segmentation of voters, sending messages that reflected very specifically the concerns of every neighborhood, every family and every person.

Barack Obama, Francois Hollande, Donald Trump, Jair Bolsonaro… all used Big Data. The coup plotters in Bolivia and the strategists of subversion against Venezuela and Cuba use Big Data in their destabilization campaigns.

We know about the scandal involving Cambridge Analytica, the company that designed the Brexit ‘Leave’ campaign, Donald Trump’s electoral campaign and those of several European government leaders.

Cambridge Analytica was denounced for the theft of data from Facebook users, but it is not the only company that employs these practices. There are corporations that gather information on more than 500 million citizens around the world and sell it as aggregated data.

In accordance with directives outlined by Donald Trump in his Presidential Memorandum of June 16, 2017, the State Department’s Cuba Internet Task Force was established, also known as the internet subversive operations group, a program created by the U.S. government to undermine the internal order here.

Scholarships and trips for young journalists with deceptive purposes, detailed strategies for work on social media, and generous pay for cyber-mercenaries to constantly harass anyone who defends the Revolution online, have all been part of implementing this tactic, financed by Washington and third country proxies.

Every undercover action plan against Cuba, crafted by every U.S. administration in office for the last 60 years, has included well-paid media operations, that now have Big Data to help out.