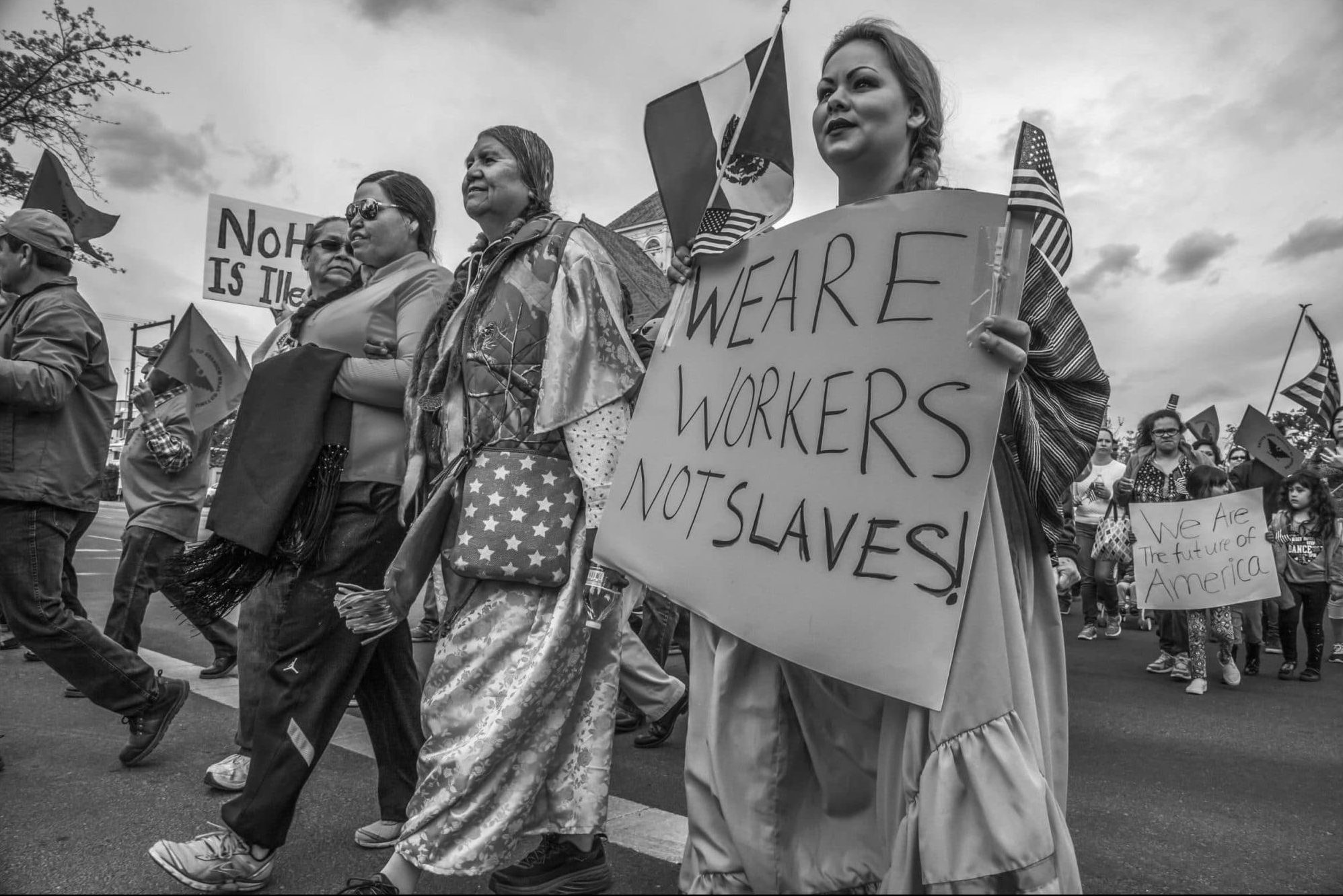 YAKIMA, WA- 1MAY17 – Members of the Yakima Nation of Native Americans join farm workers and other immigrants and community and labor activists marching through Yakima to celebrate May day and protest continued deportations and detentions of immigrants. Many workers didn’t go to work on this day, participating in the “Day Without Immigrants.” Photo credit: David Bacon. From “Are Washington’s Farmworkers COVID-19 Guinea Pigs?” Capital & Main, May 21, 2020.

The immigration plank in this year’s Democratic Party platform is a reminder that real immigration reform isn’t going to happen without serious grassroots organizing.

The platform, which the Democratic National Convention approved on August 18, is largely based on a 110-page document produced by six policy task forces that former vice president Joe Biden and Vermont senator Bernie Sanders set up in May. According to the New York Times, the Democrats were seeking “to assemble a new governing agenda…far bolder than anything the party establishment has embraced before.”

The party’s new immigration policy is definitely bolder than earlier liberal efforts; just a year or two ago it would have seemed remarkably progressive. But now this center-left compromise represents a step back from an historic opportunity offered by the immigration plan Sanders ran on in the primaries: a chance to show that the struggle for immigrant rights is inseparable from the other struggles of U.S. working people.

Largely written by Latinos with backgrounds in immigrant rights activism, the Sanders plan incorporated many grassroots demands like those in the Migrant Justice Platform, a project by immigration experts and activists that was released around the same time. These plans focused on two issues that have been completely ignored in most mainstream discussions of immigration.

The first is the exploitation of immigrant labor. Some 7.6 million undocumented immigrants and several hundred thousand guest workers were employed in the United States before the pandemic, representing nearly 5 percent of the country’s labor force. The current immigration system allows employers to “violate labor laws, skirt the minimum wage, and maximize their own profits,” the Sanders plan charged:

Large corporations target vulnerable communities as a source of labor and use their immigration status to retaliate when workers stand up for their rights. President Trump demonizes immigrants but had no qualms with employing undocumented workers at his golf clubs and hiring guest workers at his properties. Employers have also used guest worker visa programs to exploit a captive workforce that does not have the ability to quit or change jobs.

Sanders called for “redirect[ing] resources to ensure that immigrants are protected at the workplace and cannot be exploited or mistreated by employers, no matter the worker’s immigration status.” His plan noted that “[e]nforcing strong, fair and safe labor standards benefits all workers, not just immigrant workers.”

The second issue is the role of U.S. government policies in driving immigration from nearby countries. The Sanders plan cited the effects of trade deals like the North American Free Trade Agreement (NAFTA), “the history of U.S. intervention in the South and Central American region, as well as overseas,” and what will undoubtedly be a prime driver of future migration—climate change.

The Sanders plan could certainly have been stronger—especially in its proposed solutions, such as a vague call for “a humane foreign policy.” But the emphasis on labor exploitation and U.S. interventionism provided progressives with a way to counter two widespread and dangerous misconceptions about immigrants: “They take our jobs” and “They should stay home and fix their own countries.”

Immigrants and guest workers don’t actually “take jobs.” They don’t reduce the number of jobs available to native-born workers; once here, foreign-born workers become U.S. consumers, creating new jobs with the money they spend. But the exploitation of immigrant labor definitely harms other workers. The low wages that employers force on vulnerable immigrants produce downward pressure on wages for native-born workers in the same fields. The two groups are forced into a classic race to the bottom.

And most unauthorized immigrants would love to “stay home and fix their own countries.” The problem is that about three quarters of them come from this hemisphere, mostly from regions where the U.S. government has routinelyfomented coups, funded civil wars, and imposed draconian economic policies. “If you burn down your neighbors’ houses, don’t be surprised if they flee to your lawn,” notes journalist Allan Nairn, who covered atrocities by the U.S.-backed Guatemalan military during the 1980s.

U.S. interventions and U.S.-engineered trade deals have inflicted immeasurable suffering on the people of Latin America and the Caribbean, but this doesn’t mean U.S. meddling abroad has helped working people here. Just the opposite. U.S. workers have had to subsidize these policies with their taxes, and sometimes with the lives of U.S. citizens. What they’ve gotten in return is the loss of industrial jobs as Washington has backed—or even helped install—governments that keep wages low for the benefit of U.S. manufacturers seeking super-exploited labor abroad.

It’s morally right for working people in the United States to support immigrant struggles and to oppose U.S. interventionism—but it’s also in their own interests to do so.

The Sanders plan never used the words “class” and “imperialism,” but its underlying message was an appeal for class solidarity here in the United States and for opposition to U.S. interventions abroad. Inevitably, centrist Democrats made sure the final party platform edited that message out.

But this isn’t a reason for progressives to oppose the Democrats’ immigration plank. It contains a number of important promises, above all the party’s commitment to enacting procedures for the country’s nearly 11 million undocumented immigrants to gain legal status. National Immigration Law Center executive director Marielena Hincapie notes that this is a “big shift” from previous Democratic support for “comprehensive immigration reform,” a legislative measure that would have made legalization dependent on an increase in enforcement and an expansion of the current problematic guest worker programs.

Still, nothing stops progressives from advocating for the broader implications of the Sanders agenda. A class-based strategy can help defeat Trump in the elections—or aid the struggle against his policies if he wins reelection. A Biden victory would require activists to hold the Democrats to their commitments; the politicians can’t be allowed to repeat the betrayals of the Obama administration.

Last December New York-based immigrant activist Lupita Romero argued that Sanders’s immigration platform could be a tool for “organizing through and beyond the elections.” This was true then, but the dramatic events of 2020 have made it even more relevant. Public support for immigrants continues to grow, while the political system’s multiple failures are opening people’s minds to new ways of thinking. This is no time to back away from a class-based and internationalist vision for immigration reform. 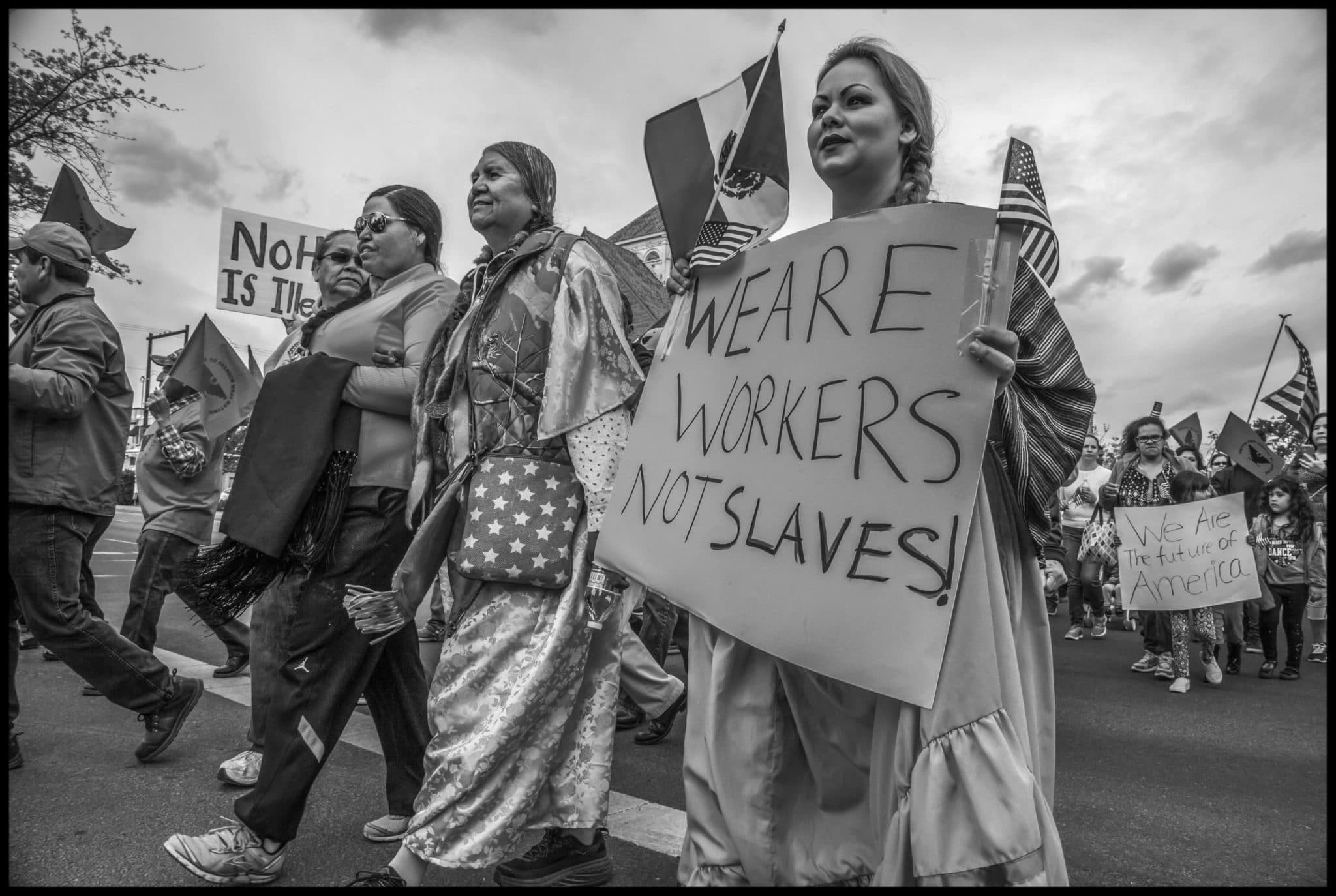 YAKIMA, WA- 1MAY17 – Members of the Yakima Nation of Native Americans join farm workers and other immigrants and community and labor activists marching through Yakima to celebrate May day and protest continued deportations and detentions of immigrants. Many workers didn’t go to work on this day, participating in the “Day Without Immigrants.” Photo credit: David Bacon. From “Are Washington’s Farmworkers COVID-19 Guinea Pigs?” Capital & Main, May 21, 2020.