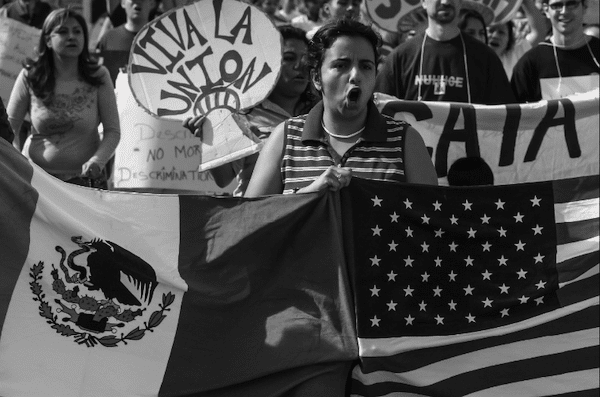 On May Day immigrants and their supporters marched through the streets of Kennett Square a small town where thousands of immigrant workers labor in sheds growing mushrooms. Photo credit: “Mushroom Workers March on May Day in Kennett Square (May 01, 2007),” Work & Social Justice: The David Bacon Photography Archive at Stanford University, Department of Special Collections and University Archives.

The article itself doesn’t do much more than reveal its authors’ ignorance about socialism and about socialist labor organizing in the early twentieth century, but it highlights a problem that has troubled U.S. socialists for more than a century. Pro-immigrant positions are natural for leftists; they have no trouble recognizing the dehumanization and the appeals to racism and xenophobia that underlie rightwing rhetoric against “open borders” and “illegal aliens.” But does socialist support for immigrants’ rights drive away U.S.-born workers?

Some on the left have avoided taking firm positions on this question. Bernie Sanders, for example, appears to be conflicted. He has a record of supporting immigrant rights, and his 2020 presidential campaign presented a mostly excellent immigration platform. But in 2015 he dismissed calls for open borders as “a Koch brothers proposal,” and he has remained somewhat ambiguous about immigration’s supposed effect on the wages of U.S. workers.

Last year, Talking Points Memo editor-at-large John B. Judis performed a real service for socialists. Judis, who has decades of experience on the U.S. left, succeeded in setting forth a clear and concise formulation of a socialist position in favor of immigration restrictions. In doing so, he inadvertently demonstrated how completely detached that position is from reality.

Judis’s discussion of immigration appeared in The Socialist Awakening: What’s Different Now About the Left, a slim 2020 book which, as Jacobin reviewer Matt McManus noted, is a “readable introduction” to the issues but suffers from a “terribly wrongheaded” nationalistic approach.

Judis firmly supports the claim that immigrants are in competition with U.S.-born workers:

[W]here employment is not boundless, nations must protect the jobs of their workers by limiting immigration. If unions want to organize low-paid service workers, they cannot contend with a continuing surplus of immigrant workers eager to compete with those already employed. (121)

He goes on to posit the existence of a

rightwing business agenda of using unrestricted immigration and a labor surplus to drive down native workers’ wages. Much of the plight of unskilled African American workers over the last 50 years was due to competition from unskilled immigrants. (121)

From this Judis concludes that U.S. socialists need to back anti-immigrant measures in order to protect U.S.-born workers. “But America’s socialist left is impervious to any restriction on immigration,” he complains. “‘You can’t talk about it,’ [Philadelphia unionist] Dustin Guastella says.” (121-122)

The one being impervious, however, is Judis himself. His argument is based on an astounding ignorance of what drives immigration and how it affects workers in the United States.

For starters, Judis’s use of the term “immigrant workers” is misleading. It’s clear from the context that he’s talking about the undocumented immigrants who accept low-wage jobs when they come here, not about the three-quarters of immigrants who are naturalized citizens or green card holders and often have a higher level of education than the U.S.-born. Immigrant workers as a group are largely employed in white-collar jobs.

Judis is actually referring to a very specific subset of immigrant workers—migrants who arrive from the Global South and are unable to obtain legal immigration status. It’s impossible to discuss the impact of immigration on U.S.-born workers without understanding this distinction.

Judis’s “continuing surplus of immigrant workers” is equally misleading. The arrival of undocumented workers here is anything but continuing.

Politicians and the media work hard to give the impression that millions of low-wage workers are constantly seeking entry into the United States from Mexico, Central America, and the Caribbean. Most U.S. news consumers would probably be astonished to learn that the undocumented population here actually declined during the years from 2008 to 2016. It continued to decline at least until 2019.

As for the “surplus” of workers from nearby countries, that’s a thing of the past: Birth rates have fallen dramatically in Mexico and Central America since the 1960s.

Why Are They Here?

Migration here from the Global South has in fact fluctuated several times over the last half century—and a striking number of the push factors come from the United States itself.

Immigrant activists in Europe have a succinct way of explaining this pattern of migration from exploited countries to the countries that exploit them: “We’re here,” they say, “because you were there.” If the arrival of undocumented immigrants in the United States is really a problem, then the solution isn’t more restrictions—it’s a firm opposition to the U.S. policies that force people to flee their homes.

Are They “Eager to Compete”?

Judis may be wrong in assuming that there will always be a surplus of immigrant workers, but isn’t it true that undocumented workers create an oversupply of labor for low-wage jobs, and doesn’t this drive down pay for other workers?

The oversupply effect is real, but it’s not dramatic, and it disappears over time. Even conservative economists like Harvard’s George Borjas admit that the labor market eventually adjusts to the increased number of workers; this is what happened following high levels of immigration in the period from 1880 to 1914. The problem is that now the new arrivals’ wages are being held down artificially.

It was relatively easy for the earlier immigrants—the white ones, at least—to gain legal status.  Even after a 1924 law sharply restricted immigration, many who entered without authorization could still adjust their status through sponsorship by close relatives or through a process known as “registry.” But there hasn’t been a renewal of registry since 1986, and in 1996 Congress passed a law that drastically limited the ability of many undocumented immigrants to get a green card through sponsorship.

The result is that the United States currently has an undocumented population of 10 to 11 million, mostly residents with no option for legalization. Nearly 7.6 million of them are workers whose lack of legal status deprives them of full labor rights. They know that efforts to unionize, to demand higher pay and decent working conditions, could make them subject to deportation.

This means that undocumented workers—more than 20 percent of the workforce in several low-wage job categories—are paid significantly less than other employees with similar qualifications; studies in the early 2000s set this “wage penalty” at about 11 percent. Low wages for the immigrants create some downward pressure on the wages of other workers, and—unlike the effects of oversupply—this doesn’t go away. It persists as long as the immigrants are denied the labor rights, inadequate as they are, guaranteed to U.S.-born workers.

These restrictions on immigration are the actual “rightwing business agenda.” And much as employers benefit from exploiting undocumented workers, they benefit even more from the social and political effect of anti-immigrant sentiments—from the prejudices that keep the U.S.-born from seeing immigrants as fellow workers and valuable allies.

The libertarians at Reason may believe that immigration “stopped socialism,” but in fact immigrant workers have been crucial for working-class organizing at least since the late nineteenth century. Their participation was important or decisive in a number of important labor actions during that period: the Homestead Steel Strike, New York City’s Uprising of the 20,000, the Lawrence Textile Strike, the Colorado Coal Miners’ Strike, the Seattle General Strike.

Immigrants and their children continued to organize during the Great Depression.

Migration from much of Europe was slowed by World War One and then halted by anti-immigrant laws in the 1920s, but there were less restrictions on immigrants from the Americas and from the Philippines, which was then under U.S. control. Together the newcomers and the earlier immigrants made up a full 11 percent of the population in 1930, according to that year’s census. Another 21 percent of U.S. residents had at least one immigrant parent.

This third of the population was a major force in labor’s response to the Depression: Mexicans and Filipinos in the California agricultural strikes; Poles, Hungarians, Germans, and Syrians in the Toledo Auto-Lite Strike; Scandinavians in the Minnesota trucker strikes. The foreign-born made up some 27 percent of the population in San Francisco, site of the 1934 General Strike; immigrants were also a significant part of the population in Michigan, the center of autoworker actions in 1936 and 1937.

The present population mix isn’t much different from that of the 1930s. In 2021 the Current Population Survey (CPS) estimated that immigrants and their children make up 26 percent of U.S. residents. And despite all the obstacles they face, today’s immigrants, like their predecessors, are carrying out powerful and innovative organizing—among delivery workers in New York, janitors in Florida, farmworkers in Vermont. Immigrant worker organizing has “injected fresh energy and urgency into the labor movement,” as journalist Michelle Chen notes.

Today’s socialists should never forget that the largest one-day nationwide strike in U.S. history was the “day without immigrants,” May 1, 2006, when as many as 2.2 million immigrant workers and their supporters took to the streets.

A Lesson From History

There’s nothing new about Judis’s rejection of the dynamic force immigrant workers represent. The old Socialist Party of America faced many of the same issues a century ago as progressives face today.

Party leaders Victor Berger and Ernest Untermann—both immigrants themselves—supported restrictions on more recent migrants, claiming, like Judis, that the newcomers threatened wages for U.S.-born workers. Untermann’s advice to immigrants was blunt: “Get out of America and give it back to the Americans.”

Other Socialist leaders, including Eugene V. Debs and “Big Bill” Haywood, had a different approach. Debs, the party’s five-time presidential candidate, warned that if socialism “does not stand staunchly, unflinchingly, and uncompromisingly for the working class and for the oppressed masses of all lands, then it stands for none, and its claim is a false pretense and its profession a delusion and a snare.” Haywood, a leader and organizer in the Industrial Workers of the World, said simply that there were “no foreigners in the working class.”

Immigration opponents eventually gained full control of the party. It had ceased to be a serious political force by the 1930s—just as tens of thousands of immigrant workers were organizing and striking during the most powerful labor upsurge in this country’s history.