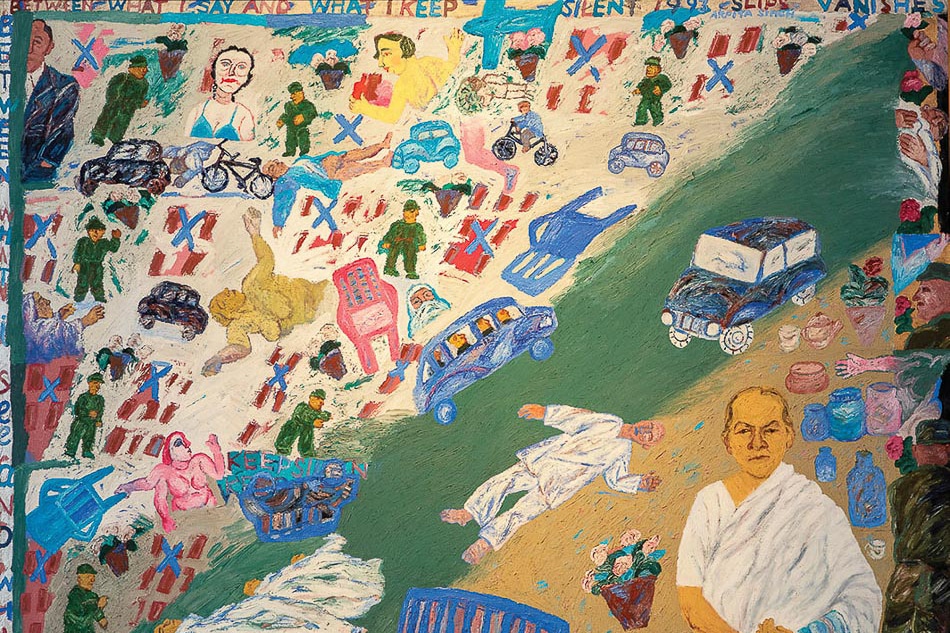 Arpita Singh (India), My Mother, 1993. From “The Dangerous Incompetence of Narendra Modi and Jair Bolsonaro: The Twenty-Sixth Newsletter (2020),” The Tricontinental, June 25, 2020.

A striking aspect of the 24 percent decline in India’s GDP in the first quarter of 2020-21 compared to the previous year’s first quarter is the decline by 10.3 percent in public administration, defense, and other public services. This is a sector where the GDP is estimated not by the “output” of the sector but by the government expenditure incurred under these heads. The decline in the GDP originating in this sector therefore means a decline in public expenditure. This is surprising for two reasons: first, it shows that government expenditure, instead of being “counter-contractionary” has been “pro-contractionary”; second, during the lockdown caused by the pandemic, one would expect government spending on health care to go up, and thereby raise the overall government expenditure, instead of the fall we are actually observing.

True, in such a period, there is a fall in government revenue; but to reduce government spending because of this, so that the fiscal deficit does not increase, is the height of folly. It worsens the contraction of the economy and greatly increases the sufferings of the people. This, however, is exactly what the Indian Prime Minister Narendra Modi’s government has done. 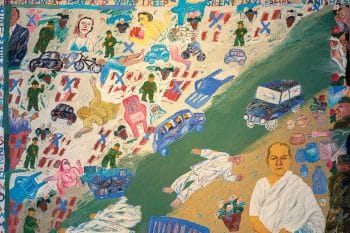 Arpita Singh (India), My Mother, 1993. From “The Dangerous Incompetence of Narendra Modi and Jair Bolsonaro: The Twenty-Sixth Newsletter (2020),” The Tricontinental, June 25, 2020.

What is more, the Modi government is persisting with this folly. Some may find this accusation strange since on the very first day of parliament the government has come with a supplementary demand of around $32 billion, which, it may be thought, represents substantial additional expenditure. But this impression is wrong. These supplementary demands are meant to cover the expenditure that the government had already announced earlier to cope with the pandemic, which was over and above the budgetary provisions. This already announced expenditure, we know, was quite trivial, amounting altogether to no more than about 1 percent of GDP. True, these supplementary demands will revive India’s flagship program for rural employment scheme under the Mahatma Gandhi National Rural Employment Guarantee Act 2005. This program had come to a virtual standstill because of lack of funds, but such revival will only entail what has already been promised, not any further expansion.

This 1 percent of GDP being earmarked for relief during the pandemic is about the lowest among all the major economies of the world. In the U.S. even Donald Trump had announced a relief package amounting to 12 percent of GDP; in Germany, it was 5 percent, and in Japan even more. The Modi government’s stinginess is astounding, and that too at a time when hunger deaths are being reported from various parts of the country, despite ample food stocks.

The ideological differences among economists on the current issue relate to two points: what should be the areas where additional expenditure should be undertaken; and how this additional government expenditure should be financed. On the first point, while the left position would be that such expenditure must entail a universal cash transfer to every non-income-tax-paying household, apart from covering investment on infrastructure, including social infrastructure like health care, the orthodox economists would only emphasize investment on physical infrastructure.

With regard to the second point, immediately, of course, the additional expenditure has to be financed by a fiscal deficit, in which borrowings from the Reserve Bank of India (RBI) will have to be the main source. Indeed many economists believe that the central government can and should spend approximately an additional $136 billion over and above what was budgeted earlier this year, and finance it immediately by enlarging the fiscal deficit to about 9 percent of the GDP compared to the 3.5 percent that was targeted in the budget. But, as the economy recovers, measures of additional resource mobilization will have to be undertaken to bring down the fiscal deficit. Here the left position emphasizes wealth taxation, which is virtually non-existent in India, as the means of doing so, while orthodox economists talk of the need to sell public sector assets including land that is in the possession of public enterprises.

The difference between these two positions is quite basic and needs to be understood clearly. A fiscal deficit entails borrowing by the government that puts claims upon the government in the hands of the private sector (we are assuming that foreign borrowings do not increase), and since these claims accrue to that segment of society that undertakes savings, a fiscal deficit increases the magnitude of wealth in the hands of the rich. If the fiscal deficit is eliminated by additional resources mobilized through the imposition of a wealth tax, then private wealth remains where it was before the deficit-financed spending occurred. Wealth taxation, in short, does not bring down existing wealth inequalities; it only prevents a further accentuation of such inequalities through a larger fiscal deficit. The left proposal, therefore, amounts to increasing government expenditure without increasing wealth inequalities.

By contrast, the orthodox proposal, such as the one put forward by Dr. Raghuram Rajan, the former governor of the RBI, does not eliminate the increase in wealth inequalities caused by a larger fiscal deficit; by transferring physical assets—land or equity—it only substitutes in the hands of the rich physical assets (land) or ownership (equity) of public sector banks or of public sector enterprises, instead of claims upon the government. It basically changes the composition of the wealth in the hands of the rich, but does not negate its enhanced magnitude.

Notwithstanding these basic differences, however, there would be broad agreement among economists of different hues on the need for larger government expenditure to prevent the economy from getting into a deep and prolonged recession. But the government remains unmoved for reasons that are not obvious. Raghuram Rajan appealed to the bureaucrats in the government to wake up to the seriousness of the situation. But bureaucrats hardly determine policy within the Modi regime; it is the PM and his coterie who determine every policy, including economic policy. If the government’s utter indifference to the disaster that awaits the economy is to be explained, if its unconcern about the massive unemployment that faces the people (which some have estimated to entail the loss of an additional 122 million jobs by April-end) is to be understood, then it is to the Modi mindset that we must turn. And here we find a combination of supreme naivete with supreme confidence.

The naivete consists of imbibing some absurd propositions from a particularly outdated version of bourgeois economics. His repeatedly calling big capitalists the “wealth creators” is an example of this. He has been told, and he believes, that these “wealth creators” will sooner or later undertake adequate investment to get the economy out of the problem it is facing. On this thinking there are no crises except occasional blips; the “wealth creators” are always there to usher in a new boom if for some reason the economy loses steam. The fact that the Great Depression of the inter-war years lasted almost a decade and might have continued but for the intervention of World War II does not figure in this thinking, which misses completely the dependence of investment on the state of demand.

The confidence consists in the belief that no matter how impoverished the people are, no matter how extreme the hardships they face, their electoral support can always be won by promoting Hindutva and effecting a communal polarization. It is an utterly cynical view, but then, the present dispensation represents the acme of cynicism.