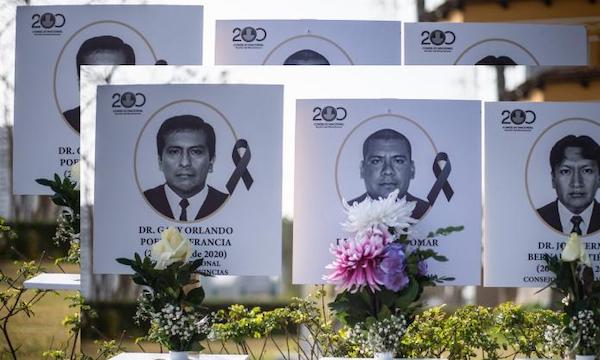 Images of more than 100 doctors who have died during the pandemic are displayed outside the Medical College of Peru PHOTO: AFP

Strikes and demonstrations are on the rise across Peru, as the government’s COVID-19 response has resulted in the country bearing the highest per capita infection rate and death toll in the world.

Healthcare workers, miners and the country’s Indigenous population led an estimated 162 protests in June and July to demand economic aid and health support. Protests and strikes continued to rise throughout August and into September, Peru’s Ombudsman’s Office reported. Land occupations and blockades initiated by Indigenous communities are also on the rise, and on 26 and 27 August, tens of thousands of nurses and doctors hit the streets in Latin America’s first nationwide strike of healthcare workers.

“The healthcare system has collapsed. Hospitals everywhere have been overflowing and, in many places, we have been forced to treat people on the streets”, Sonia (not her real name), a nurse and strike leader at Rebagliati Hospital, says over the phone from Lima.

Hospital workers such as myself have to purchase our own masks because our hospitals don’t have adequate supplies. Many thousands of us have contracted the virus and hundreds have died—including dozens of my own colleagues and close friends.

Instead of bolstering Peru’s fragile healthcare system, which left a population of 32 million to fend with just 100 intensive care beds when the first case of COVID-19 was reported on 6 March, President Martín Vizcarra initiated a 90-day militarised lockdown and called on Peruvians to exercise “social responsibility”. On 17 March, when the lockdown began, confirmed cases were at 71, with no reported deaths. By the end of June, there were 285,213 confirmed cases and 17,619 deaths. After the lockdown was lifted in July, cases more than doubled, from 288,477 on 1 July to 657,129 on 1 September.

The number of intensive care beds has since increased to 1,606, but Sonia says it has been “far too little, far too late”. “Each day we still have to turn away hundreds of people who are clearly unwell but not deemed unwell enough to warrant our care, which means people are being left to die in the streets and in their homes”, she says. Currently, there are close to 800,000 confirmed cases and more than 31,000 deaths. The Pan American Health Organization is investigating whether authorities have failed to include another 27,000 deaths in the official toll.

While the collapse of Peru’s healthcare system has been a major factor in the crisis, Cecilia Quiroz, editor of socialist publication La Izquierda Diario Perú, says there are many connected factors at play. “Social and economic backwardness due to the country’s position within the global capitalist system—into which Peru has been integrated through our vast natural resources, with subservience maintained through forms of authoritarian and military rule—low wages, the predominance of an informal economy, precarious work, the lack of a social safety net, chronic underdevelopment, the ongoing dispossession of our Indigenous peoples”, she says via email.

The pandemic has not only exposed these inequalities but is further exacerbating them.

Peru is a patchwork of combined and uneven development: semi-automated mines decorate the Andean mountains while surrounding villages often lack access to clean water; sophisticated banking systems organise finance capital in coastal cities while the majority of the workforce lives a threadbare existence in textiles, tourism and street vending; Indigenous communities across the Amazon rainforest and tributary river system struggle to maintain pre-capitalist forms of subsistence while multinational oil, forestry and agriculture companies regularly encroach on their land.

The economic shock triggered by lockdown measures has resulted in hundreds of thousands of migrant labourers from the interior of Peru leaving major cities, cramming into transport terminals or setting out on foot in desperate attempts to return to their home villages. But many have been left stranded in makeshift camps on the outskirts of cities, forced to live in tents without money, food or medicine. Between February and May, the Ministry of Labour estimated 1.2 million people lost their jobs. The Peruvian daily newspaper Correo says the figure is closer to 3.2 million people when the informal nature of the economy is taken into account. (Almost 90 percent of Peru’s urban population works in the informal sector—defined as unregulated economic activity.) The Peruvian Institute of Economics estimates that up to 10 million people have lost their jobs since the beginning of the pandemic, and as many as six out of ten working-class and young people losing the entirety of their income. The Reserve Bank of Peru estimates the economy will contract by 12.5 percent by the end of the year, the worst result in more than three decades.

Meanwhile, the police and the armed forces have been handed extraordinary powers under the pretence of combating COVID-19. During the militarised quarantine, more than 52,000 people were arrested and detained. The Judicial Protection Act, passed by the Congress in late March, has exempted the police and military from criminal liability for causing injury or death while enforcing quarantine measures. Now, there are widespread reports of beatings, assaults and, in some cases, deaths. (For example, on 19 August, during a raid on a Lima nightclub for breach of curfew, police tear-gassed the premises, resulting in a stampede that crushed and killed at least thirteen people.)

“The government has created the perfect legal and political environment to allow capital to extract the most profit out of the pandemic at the expense of the lives and pain of working-class people”, Cecilia says.

Mining companies in particular have continued to force workers to show up rather than provide paid time off. Now, miners are a hub of infections, with many thousands testing positive for COVID-19.

Peru is among the world’s major mineral producers. Minerals account for more than 60 percent of the country’s exports and 10 percent of its GDP. Copper and gold are the most important exports by value, but there are also enormous reserves of silver, zinc, lead and tin. Employing an estimated 1.5 million workers directly and indirectly, the industry attracts huge investments from Chinese, Canadian, US, Australian and British capitalists, who wield immense power through the consortiums that control mining operations. Before the pandemic, they had set aside US$58 billion for direct investment in the 2020-21 financial year. Since then, the industry has been handed a further $8.4 billion by the government. Mining operations were deemed an “essential service”, remaining 90 percent operational by the time lockdown measures were lifted. Under the cover of the pandemic, President Vizcarra has also modified environmental protection legislation, he says, to “provide certainty for investors in order to boost private investment”. In their book Blood of Extraction, Todd Gordon and Jeffery R. Webber outline what intensified minerals extraction has looked like for Peru:

Destruction of ecological systems and natural habitats, pollution, displacement of local communities, destruction of regional economies, manipulation and imposition by representatives of foreign mining corporations and the state vis-à-vis rural and indigenous communities, as well as rampant everyday corruption.

This runs alongside the type of development that this kind of mining predictably produces, a type of development incapable of improving the lives of Peruvians or protecting the environment, in which the presence of multinational mining and oil companies involves their simultaneous and connected activities of expatriating profits and externalising the social and environmental costs of mining production. Finally, there is the basic fact of declining resources—that is, the ecological limits on exhaustible mineral extraction, or the incalculable permanent loss of this natural wealth once it has been extracted and exported from the country.

Indigenous communities have begun resisting recent operations, connecting COVID-19-related grievances to their fight. In the Tambo Valley, in the southern Andean region of Arequipa, Southern Copper’s moves to restart its Tia Maria project, which was abandoned in 2011 after widespread strikes and rioting, have met renewed resistance. In mid-July, Indigenous peasants in Espinar (also in the southern Andes) initiated an indefinite blockade against Glencore’s Antapaccay copper mine, demanding COVID-19 economic relief and medical support. In late August, protesters in Espinar ambushed and torched two vehicles from the nearby Las Bambas mine and stood up to repression from the police and military. Since then, they have forced Glencore and the government to meet their demands, which include building and funding a medical oxygen plant to help treat COVID-19 patients.

In early August, Indigenous protesters in the Amazon region of Loreto seized and occupied PetroTal’s Lot 95 oil refinery, demanding COVID-19 support. (Across the Amazon basin, there have been more than 100,000 confirmed cases and more than 3,000 deaths in a population of just 330,000 people.) Security forces have since killed four people and left another seventeen with serious injuries as protests continue.

In recent weeks, the National Federation of Mining, Metallurgical and Steel Workers of Peru has reported several strikes throughout the Andean mining corridor in Uchucchacua, Cerro Lindo and Cerro Corona. In early August, workers at the Minera Aurifera Retamas SA gold and silver mine in La Libertad went on strike after it was reported that up to 700 miners had contracted COVID-19 on the job. The strike continued until health and safety demands were met—including hazard pay, mass testing, paid quarantine leave and appropriate isolation measures throughout the mining camps. Mineworkers at the nearby Pan American Silver mine also successfully struck over similar concerns. Local union leader Luis Cerna Polo is now facing charges over the strikes that, if convicted, could result in a fifteen-year jail sentence.

At Doe Run’s Cobriza project in Huancavelica, in the southern Andes, miners are moving to place the project under workers’ control after several months of stalled operations, which have left more than 1,500 workers and their families without incomes. On 10 September, miners at the company’s La Oroya, Huancayo and Huancavelica operations went on strike. “The natural resources are ours, but capital takes them away. For that reason, we must fight to put these resources at the service of life and the environment instead of the pursuit of profits”, the workers said in a statement.

In response to the growing instability, three armed forces officers have been brought into Vizcarra’s ministerial cabinet. Throughout the crisis, Peru’s political class has been eager to promote the military as a force that stands above politics and the country’s recent corruption scandals, which have led to the arrest of four former presidents and the death of Alan García—the country’s president in 1985-1990 and 2006-11—who committed suicide last year before police could detain him. Vizcarra, who came to power two years ago, is now facing similar allegations. The Congress, a majority of whose members face corruption allegations themselves, voted on 11 September to begin impeachment proceedings against the president. Last year, Vizcarra faced another impeachment, but dissolved the Congress with the backing of the police and armed forces.

The normalisation of the armed forces within the sphere of official politics is setting a dangerous precedent in a country that is no stranger to military rule. “Only workers and Indigenous peoples can save us from this nightmare”, Sonia says.

Politicians like to refer to us as heroes when it suits them—that is, when we are dying as martyrs in the service of profits. But only when we fight, in our workplaces and in the streets, do we deserve the title of heroes.