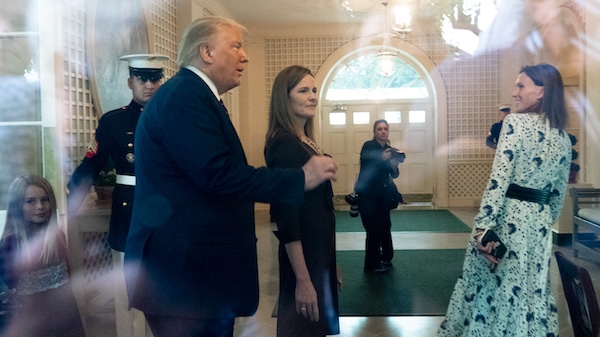 In an image taken through a window, President Donald Trump, left, and Judge Amy Coney Barrett, walk through the Palm Room after announcing Barrett as his nominee to the Supreme Court, in the Rose Garden at the White House, Saturday, Sept. 26, 2020, in Washington. Alex Brandon | AP

The Trump White House wasted no time in nominating Amy Coney Barrett, a devout Catholic, to the Supreme Court after RBG’s passing gave this administration an unprecedented third bite at the SCOTUS apple. Barring an improbable successful challenge by Democrats, Barrett is on her way to becoming a Supreme Court justice and tipping the scales of the highest court in the land in favor of Conservatives by a margin of seven to two.

As the American media lurches forward onto the predictable spectacle that such a lopsided court will, no doubt, elicit from the irredeemably partisan media, it is worth shining a spotlight on the links Barrett has to an organization described by a defector as a “totalitarian” group “imbued with fascist ideas turned to religious purposes” with direct involvement in the darkest activities of what some call the permanent or “deep” state.

The man who is said to vet the president’s list of SCOTUS candidates, Leonard Leo, is the executive vice president of the arch-conservative Federalist Society, which has figured in the appointment of all but one of the conservative justices currently sitting on the Supreme Court, including Trump’s two now-installed nominees, Neil Gorsuch and Brett Kavanaugh. 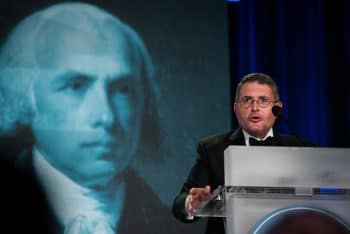 While the Federalist Society itself has plenty of dubious relationships with individuals like Charles Koch and his network of billionaire oligarchs hell-bent on reshaping American politics to serve their ends, it is Leo’s association to another organization that reveals links to far older and more powerful networks that harken back to the most recondite history of Cold War politics and the CIA in their ostensible fight against communism through an “unholy alliance” between the intelligence agency, the Vatican and the Mob.

Leonard Leo is a board member of the Opus Dei’s Catholic Information Center (CIC), where sitting U.S. Attorney General, Bill Barr, and White House Counsel Pat Cipollone, also once served. The Catholic lay group has been described as one of the world’s “most powerful and politically committed” secret societies, with direct ties to the Vatican as a “personal prelature,” an official status awarded by John Paul II that made sure the group only answers to the Pope himself.

Founded in 1928 by a Spanish priest and lawyer, Opus Dei, wouldn’t become the agent of global fascism until later in the twentieth century when the CIA began funneling money to an Opus Dei think tank in Chile called the Chilean Institute for General Studies (IGS) after it drew support for the overthrow of democratically elected president Salvador Allende from Chilean bishops, and was a pivotal cog in the implementation of Operation Condor–a transnational intelligence operation running through Southcom to aid South American right-wing dictatorships in the 1970s. Many of the members of IGS went on to become cabinet officials in Pinochet’s military junta.

The Pope’s special designation was the result of Opus Dei’s covert role, assisted through William Colby’s CIA, to effectuate damage control after the collapse of an Italian bank in the late ‘70s led to multiple investigations by Italian authorities that uncovered a concerted effort to disrupt and dismantle left-leaning groups or political parties in Europe by financing so-called “stay-behind units” of former Nazi soldiers and other extreme right-wing elements through a global money-laundering, drug-running and assassination network involving the highest echelons of the U.S. government, the Holy See and the Sicilian Mafia.

Known as Operation Gladio, it was only as the scheme was unraveling in the late 70s that Opus Dei began to play its vital role in covering up the movement of billions of dollars worldwide to prop up dictatorships in Latin America, as well as acts of subversion and sabotage throughout the old continent. In 1984, the organization was recruited to reorganize the Vatican’s finances, which were then under heavy scrutiny from Italian investigators. 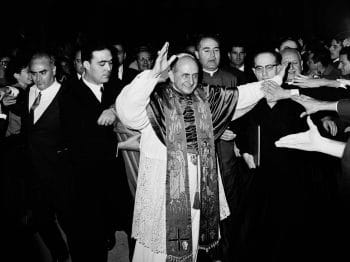 The five-member supervisory board that was formed to carry out this mission included one of the most important figures in the establishment of Gladio: Deutsche Bank CEO Hermann Abs had been in charge of allocating Marshall Plan funds to German industry after World War II and was set to oversee the reorganization of the “most secret bank in the world,” the Istituto per le Opere di Religione—Institute for the Works of Religion, more commonly referred to as the Vatican’s bank.

Abs’ initial appointment to the Opus Dei advisory board was rescinded as a result of the Simon Wiesenthal Center’s protest over his role as banker for the Third Reich and a director of the IG Farben chemical cartel, which ran a concentration camp in Auschwitz. Abs was replaced by Thomas Pietzcker, a Deutsche Bank director who worked under Abs. The recent FinCEN leaks reveal that the German bank’s money laundering days continue as strong as ever.

The religion of national security

Opus Dei or “Work of God” was already a $3 billion enterprise by the time it took over the reorganization of the Vatican’s IOR and controlled six hundred newspapers, fifty-two radio and television stations, twelve film companies, and thirty-eight news agencies, according to a Mother Jones investigation.

It’s links to American intelligence through CIA director William Colby and the banking establishment through members Francis X. Stankard of Chase Manhattan and William E. Simon, Nixon’s Secretary of the Treasury, are well established and remain strong to this day through individuals like Bill Barr, who was just awarded the Christifideles Laici Award–a prize that recognizes “Christlike behavior”–from the National Catholic Prayer Breakfast (NCPB), founded by Pat Cipollone and whose president is none other than Leonard Leo.

The rise of extreme right-wing conservatism in America is all but guaranteed by the new composition of the Supreme Court, which now looks forward to a generation, if not more, of foundational jurisprudence shaped by a cohort of judges selected by the most reactionary clique in Washington, whose views were neatly encapsulated by Barr, himself, in a speech at the University of Notre Dame in the fall of 2019.

“Secularism,” Barr proclaimed in the Indiana school, was to blame for “the wreckage of the family” and “soaring suicide rates,” among other social ills. Opus Dei, however, did not figure in Barr’s speech. The CIA, too, prefers not to discuss its relationship with the ultra-orthodox, secret group deeming it a matter of national security.