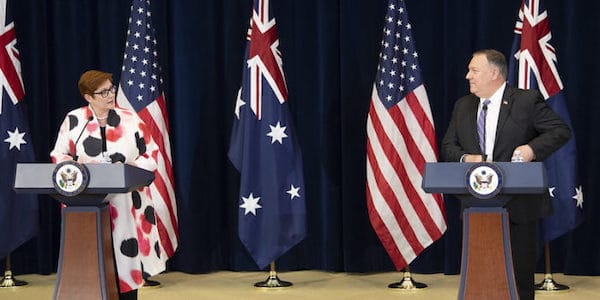 Secretary of State Mike Pompeo was in Japan today to attend a high-profile summit of top diplomats from the countries involved in the “Indo-Pacific Quad.” The Quad is a U.S.-initiated alliance composed of Australia, Japan, the United States and India. It is an important pillar of the Trump administration’s strategy to ratchet up confrontation with China.

In Pompeo’s opening address to the summit, he stated, “I also look forward to … renewing our resolve to protect our precious freedoms and the sovereignty of the diverse nations of the region. As partners in this Quad, it is more critical now than ever that we collaborate to protect our people and partners from the CCP’s exploitation, corruption, and coercion.”

As is to be expected from the managers of U.S. foreign policy, this statement turns reality on its head. Pompeo uttered these words while visiting a country in which the United States carried out the nuclear obliteration of two cities with minimal military significance at the cost of over 200,000 civilian lives. Elsewhere in the region, the U.S. military has waged genocidal wars of conquest in the Philippines, Korea and Vietnam. The U.S. government has backed brutal dictatorships and played a key role in orchestrating the 1965 Indonesian genocide.

Hypocrisy aside, the Quad poses a distinct threat to peace in the present day. While most Asian states have extensive relations with both powers, the United States hopes to polarize the region into competing pro-U.S. and pro-China blocs. To the strategists of U.S. empire, Japan, Australia and India are naturally their most important junior partners.

Despite its best efforts, the U.S. government has run into difficulty drumming up enthusiasm around the world for a full-on “new Cold War” against China. “The Quad is clearly a coalition of the unwilling, apathetic, and disinterested,” said KJ Noh, a peace activist and scholar on the geopolitics of Asia, citing “Their failure to make even a single common statement even naming China or directly agreeing with Secretary Pompeo.” Noh argued “This is partially because all the Quad countries are mutually dependent on China for their economic well being and growth … Their economies–and futures–are intertwined, even more so now, given that China is currently the only country in the world with a growing economy.”

There is also unevenness among the members of the Quad. Noh acknowledges that Japan is the most predisposed to follow the United States into all-out conflict, noting that the country has a history of brutal colonial rule in China and “hosts nearly 100 U.S. bases which would be the “unsinkable” aircraft carrier in case of a shooting war.”

India is currently engaged in a tense standoff along its disputed, mountainous border with China. While clashes this year have claimed soldiers’ lives, India maintains its participation in several important international initiatives alongside China, such as the BRICS bloc and the Shanghai Cooperation Organization. There is a clear advantage for India, a former British colony, in the emergence of a “multi-polar” world order as advocated by China over the existing western-dominated one.

Noh told Liberation that Australia is “currently the most obviously hawkish … with their Defense department think tank, ASPI, responsible for a huge amount of anti-China propaganda and information warfare” but added that in doing so the country runs the risk of “suffering serious repercussions from China, as their trade and service sectors are largely dependent on China.” This is not lost on large sectors of the Australian elite, and even led the province of Victoria to join China’s Belt and Road Initiative trading bloc in defiance of the federal government’s position.

Pompeo had initially planned a more extensive regional tour involving stops in South Korea and Mongolia following the meeting in Japan, but had to cancel as a result of the outbreak of Coronavirus infections among members of the Trump administration’s inner circle. While he failed to secure a firm commitment at the Quad summit for an escalation in hostility towards China, the U.S. is highly unlikely to give up anytime soon.