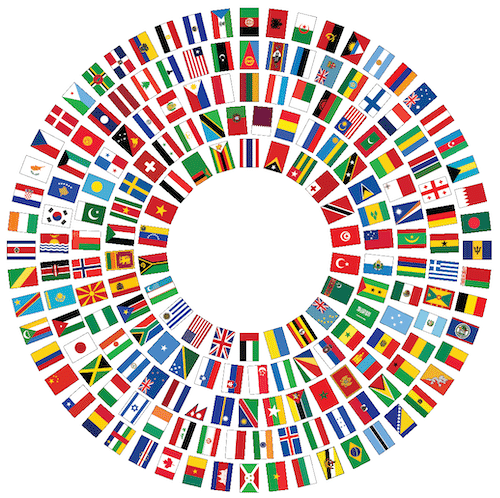 In its latest World Economic Outlook report, the IMF again tackled the issue of climate change, global warming and what to do about it. As it did last year, the IMF recognised that climate change was a burning issue for humanity and the planet. But this time it claimed that there were policy options that could stop any further heating to a tipping point beyond which there was no turning back.

Global emissions fell by 8.8 per cent in the first half of this year amid restrictions on movement and economic activity owing to the coronavirus pandemic, according to a new report. 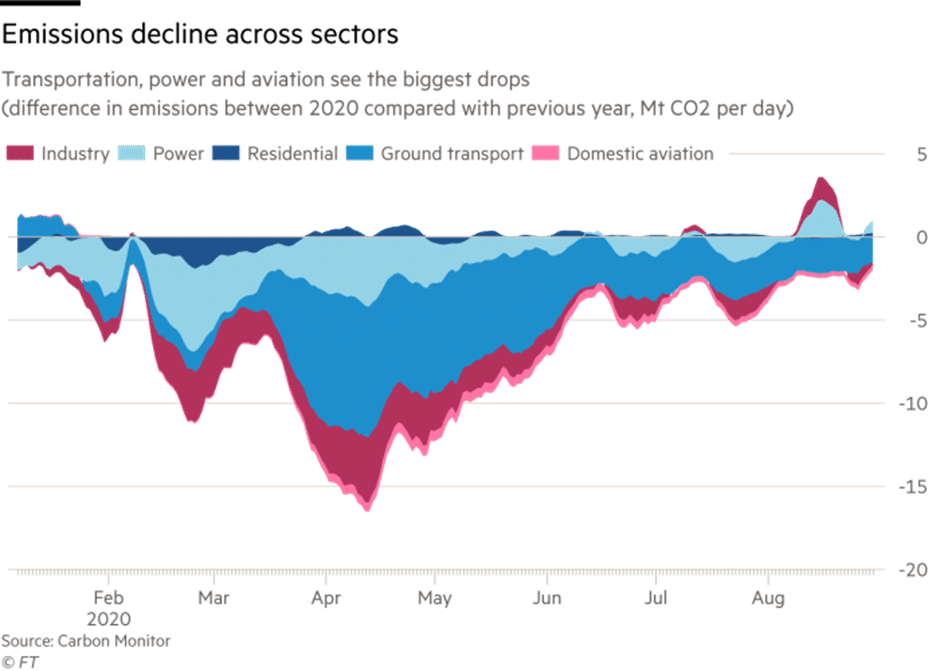 But it’s coming back up. 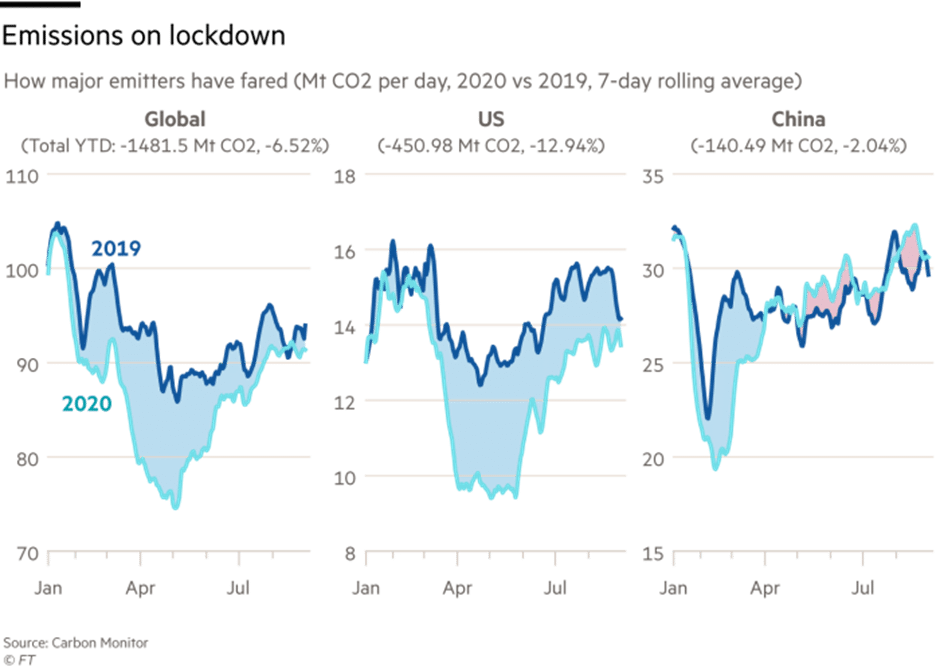 “Unfortunately, the climate protection impact will be almost negligible,” from the COVID slump, says the report. Even though carbon dioxide emissions are lower than usual, the concentration of carbon dioxide in the atmosphere is still increasing due to continued fossil fuel consumption. “It makes almost no difference in global warming. Maybe one-hundredth of a degree difference, probably even less,” it said.

And in a report released this week, the United Nations forecast that unless global warming is stopped the planet will turn into “uninhabitable hell” for millions. The UN report put it on the line: political and business leaders are being “wilfully negligent” as natural disasters nearly double this century. In the period 2000 to 2019, there were 7,348 major recorded disaster events claiming 1.23 million lives, affecting 4.2 billion people (many on more than one occasion) resulting in approximately US$2.97 trillion in global economic losses. This is a sharp increase over the previous twenty years. Between 1980 and 1999, 4,212 disasters were linked to natural hazards worldwide claiming approximately 1.19 million lives and affecting 3.25 billion people resulting in approximately US$1.63 trillion in economic losses.

Much of the difference is explained by a rise in climate-related disasters including extreme weather events: from 3,656 climate-related events (1980-1999) to 6,681 climate-related disasters in the period 2000-2019. The last twenty years has seen the number of major floods more than double, from 1,389 to 3,254, while the incidence of storms grew from 1,457 to 2,034. Floods and storms were the most prevalent events. The report “The Human Cost of Disasters 2000-2019” also records major increases in other categories including drought, wildfires and extreme temperature events. There has also been a rise in geo-physical events including earthquakes and tsunamis which have killed more people than any of the other natural hazards under review in this report.

Echoing the IMF report, the UN said that “Currently, the world is on course for a temperature increase of 3.2 degrees Celsius or more, unless industrialized nations can deliver reductions in greenhouse gas emissions of at least 7.2% annually over the next 10 years in order to achieve the 1.5 degree target agreed in Paris”. 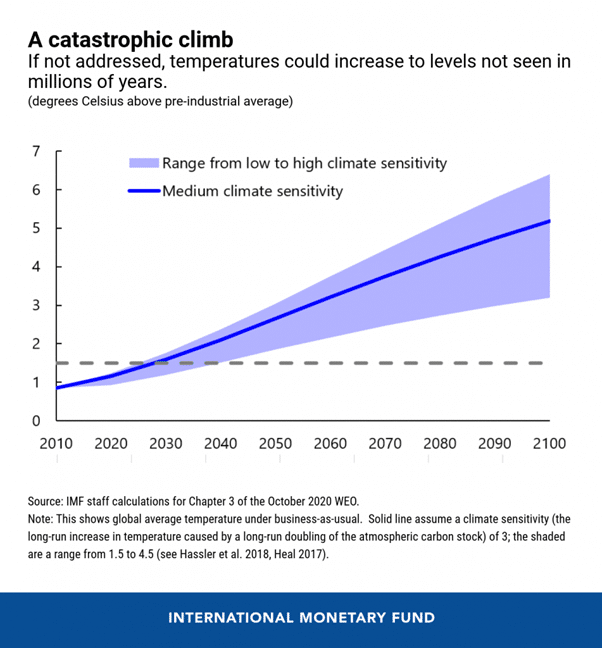 While China is the biggest emitter of CO2, mainly because of its population size, the fastest annual growth of emissions comes from India and the US. 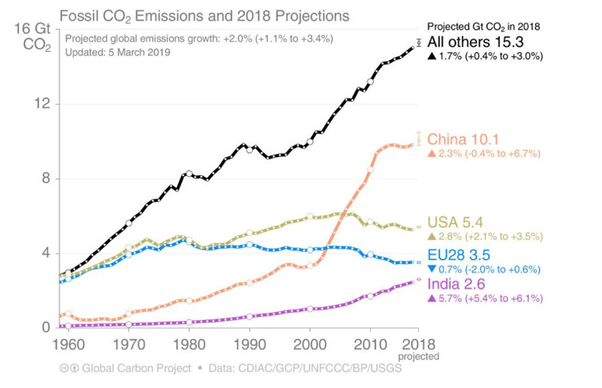 The IMF, however, reckons that it has the answers for avoiding impending disaster: “Unaddressed, climate change will entail a potentially catastrophic human and economic toll, but it’s not too late to change course.” Keeping temperatures to levels deemed safe by scientists requires bringing net carbon emissions to zero globally by mid-century at the latest, but this can be done, says the IMF with two major economic policy tools which moreover “can be pursued in a manner that supports economic growth, employment and income equality”.  This sounds very positive.

What are the IMF’s planet-saving economic policies? The first is to reduce the use of fossil fuel energy sources and the second is to reduce energy consumption in total. According the IMF economists, this can be done with carbon taxes and market pricing of carbon emissions. “a carbon tax makes dirty fuels more expensive, which incentivizes energy consumers to shift their consumption towards greener fuels. Total energy consumption falls too because, overall, energy is more expensive.” And on the other side of the coin, we should make “green energy cheaper and more abundant (through subsidies or direct public investment in green energy)” .

Countries should initially opt for a green investment stimulus—investments in clean public transportation, smart electricity grids to incorporate renewables into power generation, and retrofitting buildings to make them more energy efficient. This green infrastructure push will achieve two goals. First, it will boost global GDP and employment in the initial years of the recovery from the COVID-19 crisis. Second, the green infrastructure will increase productivity in low-carbon sectors, thereby incentivizing the private sector to invest in them and making it easier to adapt to higher carbon prices.

The IMF has a model that claims that its strategy to mitigate climate change could actually boost global GDP in the first 15 years of the recovery by about 0.7 percent of global GDP on average, and employment for about half of that period, leading to about 12 million extra persons being employed globally. As the recovery takes hold, preannounced and gradually rising carbon prices will become a powerful tool to deliver the needed reduction in carbon emissions.  “If implemented, such a policy program would put the global economy on a sustainable path by reducing emissions and limiting climate change. The net effect would approximately halve the expected output loss from climate change and provide long-term real GDP gains well above the current course from 2050 onward.” So it seems we can have our cake and eat it: more growth and zero emissions! 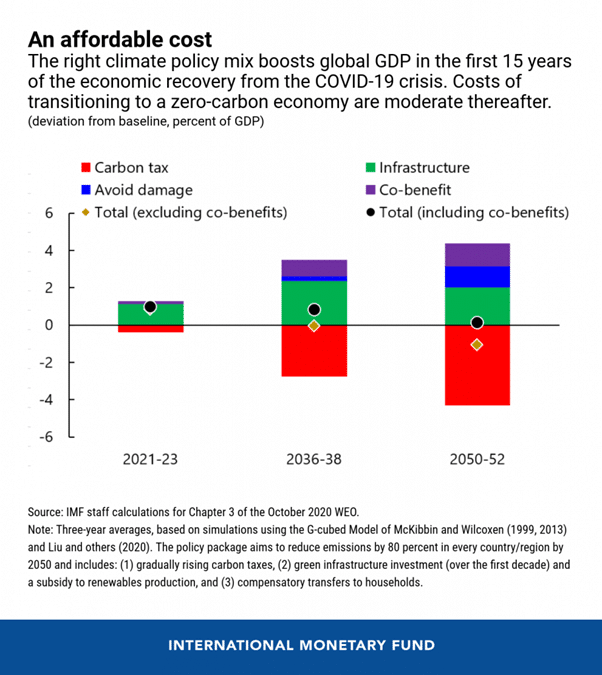 However, the IMF does admit that, despite the long-run benefits and an initial boost to economic activity, its policies do impose costs along the transition. Between 2037–50, the mitigation strategy would hold global GDP down by about 0.7 percent on average each year and by 1.1 percent in 2050 relative to unchanged policies. But says the IMF, “These costs seem manageable, however, considering that global output is projected to grow by 120 percent between now and 2050. The drag on output could be further reduced if climate policies incentivize technological development in clean technologies—through R&D subsidies, for instance. Moreover, the package would be neutral for output during that period if important benefits in the form of better health outcomes (due to reduced pollution) or less traffic congestion are considered.”

Also the IMF recognises that “low-income households are more likely to be hurt by carbon pricing, as they spend a relatively large share of their income on energy and are more likely to be employed in carbon-intensive manufacturing and transportation.” But governments can use various policies to limit the adverse effects of higher carbon prices on households eg cash transfers and public spending. And jobs can be saved by “retooling workers will also help to smoothen job transitions to low-carbon sectors.” 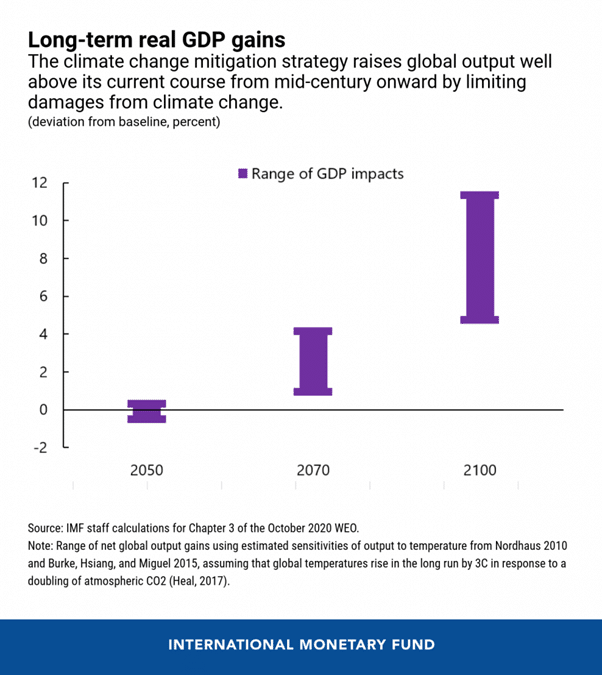 This all sounds great. Global warming avoided, economic growth and jobs continuing and all through market-oriented measures and government investment, without touching the sides of the fossil fuel industry and multi-national control of energy, mineral and raw materials production.

The first thing to note, however, that the IMF model assumes no financial and investment crises in capitalist production for the next 30 years! It projects average annual global growth of 3.3% up to 2050.  And yet it also reckons its ‘mitigation’ strategy would knock 1%pt a year off that rate. On that basis, per capita real GDP growth would be barely above population growth in many countries of the Global South. The model does not really avoid the conflict between lives and livelihoods.

The IMF also clings to the mainstream neoclassical model of relying on market pricing to alter production and consumption. Carbon emissions will be priced in markets to account for the ‘social cost of carbon’ in pollution and global warming. But economists who have attempted to calculate what that ‘social price’ should be have found that there are so many factors involved and the pricing must be projected over a such a long time horizon that is really impossible to place a monetary value on the social damage–estimates for the carbon price range from $14 per ton of CO2 to $386! “It is impossible to approximate the uncertainties in low-probability but high-damage, catastrophic or irreversible outcomes.” Indeed, where carbon pricing has been applied, it has been a miserable failure in reducing emissions, or in the case of Australia, dropped by the government under the pressure of energy and mining companies.

The other IMF policy is for public investment in ‘green technology’. Here the IMF turns to carbon capture. While carbon capture can work, at least in theory, it is prohibitedly expensive and may even become part of the problem. For example, consortium including Amazon and Microsoft invested in CarbonCure Technologies, a Canadian firm seeking to slash the carbon dioxide emissions of concrete. But producing cement, the key ingredient in concrete, creates so much CO2 that if the industry were a country only China and the U.S. would emit more over the course of a year.

Moreover, carbon capture is still in its infancy–there are only about 20 projects in commercial use worldwide, according to the IEA. And even supportets of CCT admit that “We are at a tipping point and no one knows quite how it will tip,” said Klaus Lackner, an Arizona State University expert in the field who invented “mechanical trees” that remove CO2 from the air. Lackner said the world was likely to surge beyond the 1.5C global heating limit set out in the Paris climate agreement. “We are living in an overshoot world where 1.5C will be missed,” he said. “We are going to have to step harder on the brakes and we are going to have to get carbon back.”

The IMF’s policy proposals are creating a ‘smokescreen’ (literally! ) to hide the reality that, as long as the fossil fuel industry and the other big multinational emitters of greenhouse gases are untouched and not brought into a plan for phasing them out, the tipping point for irreversible global warming will be passed.

The world’s most authoritative body of energy analysts, the International Energy Agency, found in its latest annual flagship report that the world is headed toward global warming higher than the Paris Agreement’s most aggressive limit of 1.5°C. The agency, reckons that getting fossil fuels substantially out of the energy system, it says, would cost 25% more than the $54 trillion the world is already expected to invest by 2040.

In its 2020 World Energy Outlook, the IEA that “The era of global oil demand growth will come to an end in the next decade , but without a large shift in government policies, there is no sign of a rapid decline. Based on today’s policy settings, a global economic rebound would soon push oil demand back to pre-crisis levels.” 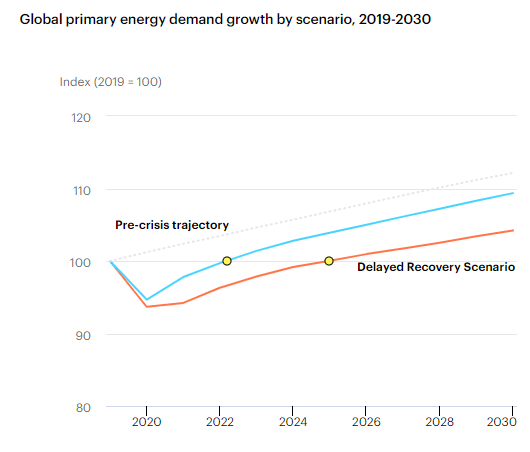 And if today’s energy infrastructure continues to operate as it has in the past, it would lock in by itself a temperature rise of 1.65 °C.  That is beyond the tipping point for the extinction of planetary species, destructive weather and mass migration.