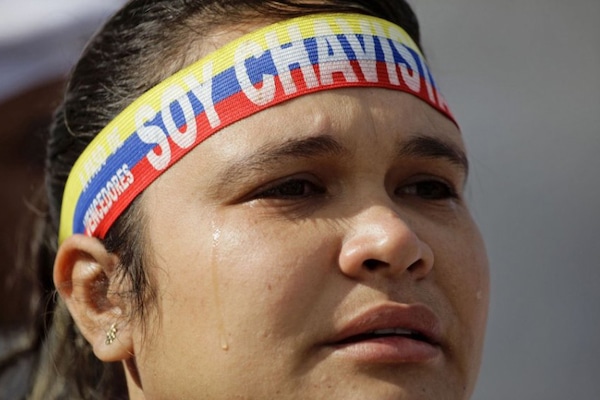 Venezuela: Could rebellion in the ranks spell trouble for Maduro?

Venezuela is no stranger to protests, registering thousands of demonstrations, rallies and strikes each year. As of October 1, about 7000 protests had occurred this year (roughly 25 a day), according to the Venezuelan Observatory of Social Conflicts.

But protest numbers have been on the rise, with September registering an average of 40 a day, including more than 700 in the last ten days of the month.

Unlike before, these protests have by and large not taken place in right-wing opposition strongholds nor necessarily demanded the removal of President Nicolas Maduro.

Instead, they have focused on demands around access to basic services–electricity, domestic gas, water–and occurred in areas that traditionally voted for former socialist president Hugo Chávez, Maduro’s predecessor.

Differing from the “protests of the rich” of past years, Unitary Chavista Socialist League (LUCHAS) spokesperson Stalin Pérez Borges told Green Left Venezuela is witnessing a rise in “protests of the poor, driven by the difficult situation people face.” Their targets, in most cases, have been officials aligned with Maduro’s United Socialist Party of Venezuela (PSUV).

United Left general coordinator Feliz Velasquez agrees. He told GL these protests are “very different from the protests we had in Venezuela in 2014 or 2017, which were violent protests seeking to bring down the government.

Today, what we have are largely peaceful protests by popular sectors, organised sectors, including in some cases entire small communities, that, faced with the crisis affecting basic services, have decided to protest.

These types of protests are not entirely new. Nor are their causes.

Atenea Jiménez, from the National Network of Commune Activists (RNC), spoke to GL in early 2019 about a wave of protests that had taken place in January that year in some barrios (poor neighbourhoods) across Caracas, “including some that have historically been very [pro-Chávez]”.

This year saw a small outbreak of largely spontaneous riots and looting in April in some small towns across the country.

Once again, regional towns are the epicentre of the protests.

Neglected for decades by traditional parties, Venezuela’s countryside became–alongside the barrios–Chávez’s strongest base of support.

However, eight years after his death, it is here where the reversals of the revolution have been felt the most.

The Maduro government has been keenly focused on keeping the lights on and the water running in large cities–above all in the capital, Caracas. When this has failed, authorities have at times relied on state repression, and even armed thugs, to quell dissent.

But in regional towns, residents can often go days without basic services. Fed up with this situation, popular movements are taking to the streets.

Jonatan Vargas, a member of the international relations team of Bolívar and Zamora Revolutionary Current (CRBZ), which is active inside the PSUV, told GL the crisis in basic services is “due to the economic, commercial and financial blockade that U.S. imperialism has unilaterally imposed on Venezuela.”

Since 2014, the U.S. has whacked more than 40 unilateral sanctions on Venezuela, in an attempt to strangle the South American country’s economy and bring down Maduro. These measures have cost Venezuela an estimated US$116 billion hit to its economy and more than 40,000 lives.

Vargas adds the crisis is also due to “the internal contradictions of the process… inefficiency, ineffectiveness, bureaucratism, indolence and corruption.”

An example of how these factors have combined to affect the country is the state oil company PDVSA, “the heart of the Venezuelan economy”.

“PDVSA has been a victim of the blockade,” said Vargas.

Its U.S.-based affiliate CITGO, which used to supply the additives needed to process oil into petrol in Venezuela, was seized by the U.S. government in 2019 and handed over to the imperialist puppet, Juan Guaido, in an act of blatant piracy and theft.

Then-National Assembly president Guaido proclaimed himself Venezuela’s “interim president” in January 2019. Since then, the U.S. has used this excuse to transfer any Venezuelan state assets and wealth it can get its hands on to Guaido and his supporters.

As a result, Venezuela has stopped producing petrol, triggering a dramatic shortage that has affected everything from daily public and private transport to agricultural production. The petrol crisis was the biggest single source of discontent in September, accounting for more than 400 protests.

“At the same time” Vargas said,

PDVSA has been the victim of internal corruption, with various former company presidents and directors having been found guilty of corruption.

Along with basic services, there is also the issue of workers’ wages. September registered a daily average of nine protests or strikes demanding better wages.

Hyperinflation, another weapon alongside sanctions in the economic war against Venezuela, has meant workers’ wages have plummeted, leaving most essential goods out of reach for the majority.

“Right now, Venezuela has the lowest wages in the world,” Velasquez said.

A teacher, a professional, a university academic does not earn more than $2–3 a month, which of course creates a lot of hardship when a kilo of rice can cost $1.

What this means, said Pérez Borges, is that “people have to dedicate all their time, not just to their job but to doing everything they can to help their family survive. This has become the main preoccupation of everyday life.”

COVID-19 has made all this even more difficult. While the government’s measures to contain the pandemic have been largely successful, measures such as lockdowns have made things harder for those who have to move around to buy or sell goods in the informal market to make ends meet, said Velasquez.

Asked about opposition involvement in the protests, Vargas said divisions on the right had largely prevented it from playing any significant role.

The ultra-right faction, which has been dominant within the opposition since Maduro won the 2013 elections, has lost support due to its acts of terrorist violence in the 2014 and 2017 protests and the failure of Guaido’s strategy, Vargas explained.

This has converted them into “a minority with no connection to the popular masses.”

Velasquez added that an important section of the opposition had recently decided to break with the ultra right’s strategy of violence and pursue “its own strategy, which includes participating in the upcoming [December 6 National Assembly] elections”.

All this has led to divisions within the opposition that have impeded it from being able to appropriate the protests for themselves.

We saw this with the recent protest by education workers. The opposition called on people to converge in one place, but the unions decided to gather elsewhere and had a much larger demonstration.

Another example of this was the protests in Urachiche, Yaracuy, in September.

There, a peaceful protest was called by a local radio presenter and leader of the [pro-revolution] Tupamaros movement. The aim of the protest was to peacefully march and present a series of demands and solutions to local [PSUV] authorities.

The mobilisation was very large, much larger than anything the opposition could mobilise. But the opposition began to tweet photos of the protests, saying it was them marching in the streets against the government, even though they had nothing to do with it.

The opposition then tried to call another protest the next day, but all they could muster was a tiny group of people who set the local mayor’s office on fire in an attempt to generate greater violence.

So you can see these were two distinct moments: first, a mass, peaceful popular protest; and then an attempt by the opposition to use that first moment for its own purposes, because they cannot mobilise people as they have lost credibility, including within their own base.

How should the left respond to these protests? In some cases, PSUV authorities have done so with repression, claiming those behind the protests represented a threat to the revolution.

Vargas notes, far from being part of a nationwide revolt against the revolution, these protests “remain disconnected from each other and are specific protests, in certain areas around particular demands and problems that people are facing.”

He believes revolutionaries have to “accompany the legitimate protests and just demands of the people, organise together with them, accumulate force and jointly come up with solutions to improve peoples’ quality of life.”

Vargas said the left has to always be on alert for attempts by the opposition to use peoples’ legitimate demands to promote violence and destabilise the country. But it also has to systematically fight corruption and transform the public powers, starting at the local level.

“These are structural problems that have not yet been resolved, but whose existence has been recognised by Maduro.” Resolving them, though, will be critical to empowering the people and constructing “a more democratic and participatory state”.

Can the Maduro government be an instrument in this fight, or has it become an obstacle to overcome? While a majority of pro-revolution forces–particularly those in the PSUV, by far the largest single political party in the country–continue to back the president, the numbers of those questioning the direction Maduro is taking the country is growing.

Velazquez–whose organisation is part of an alliance of left parties and movements running candidates against the PSUV in the coming election–believes there has been a shift in the government’s approach between Chávez and Maduro. “Chávez always sought consultation, debate. He always asked people to present proposals for overcoming problems and was willing to correct mistakes, learn together with the people.

“The style of government we have now is very different”, he said. The Maduro government has an “aristocratic vision of doing politics, where the government thinks they are the owners of the truth, that they are a government of the best, for the rest.

This vision of politics has led them to discredit the views and opinions of other political movements, to ignore peoples’ needs and demands.