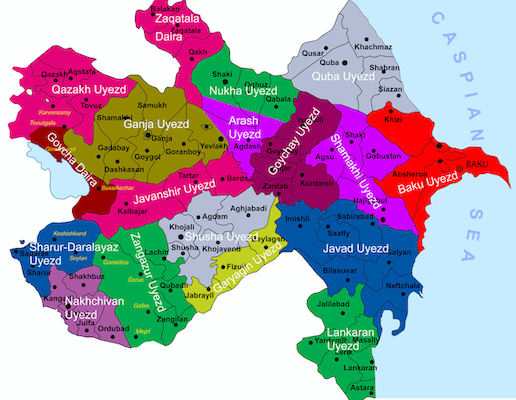 “So it would be in the interests of the Azery and Armenian people to recognise the self-determination of Karabakh in exchange for the Azery territories occupied during the 1994 war, as well as to guarantee nonaggression and the obligation to act by peaceful means only.”

The events in Karabakh as well as the anti-Armenian pogroms in the Azery city of Sungait and others — it was one of the first National conflicts that broke out yet in the years of Gorbachev’s perestroika. Karabakh itself is a territory that for centuries was populated by both Armenians and Azery people. In the Soviet years it had the status of an autonomous district in the territory of Azerbaijan. This conflict, as well as many others, was based on the objective growth of national self-awareness, mostly that of those nations that had acquired their literacy, national art, literature and started to comprehend their national role in the Soviet history. As the proletarian internationalism in the CPSU policy got weaker in the last decades of the Soviet period, this National self-consciousness transformed into nationalist sentiments. Counter to the interests of the working people, who had nothing to divide, these sentiments were promoted by the National intelligentsia and bureaucracy. For some of them nationalism meant an opportunity to take a good position or a “warm seat” in their republic.

The pretext for the Karabakh conflict was the process of some growth of the Azery minority there. This process generated some apprehensions that the Azery authorities may well put an end to the autonomy of Karabakh. So the Armenian leadership, including the Communist Party of Armenia, proposed to change the national and administrative status of Karabakh — to unite it with Armenia. The leadership of Azerbaijan including the CP of Azerbaijan opposed it as in their view it was a violation of the territorial integrity of Azerbaijan. And the Gorbachev leadership of the CPSU avoided a principled decision based on the Nation’s right on self-determination. Instead Gorbachev was trying to persuade the Armenian leadership to give up. This ostrich policy of his brought about protests in Erevan, the Arminian capital. As the result Moscow sent troops to Erevan, but these military actions only further strengthened nationalist feelings.

In 1994, after the demise of the USSR, there broke out a full-scale war between Azerbaidjan and Armenia for Karabakh. As a result the armed forces of Armenia conquered not only Karabakh itself, but also some neighbouring areas, which were regarded as a buffer zone providing Karabakh’s security. This war was one of many national conflicts in the former Soviet territory, such as the conflict between Moldavia (or Moldova) and the Trans-Dniestr Republic; a conflict between Georgia and Abkhazia as well as in Southern Ossetia; Russia and the Chechen republic; the Ukraine and Lugansk/Donetsk regions; Uzbekistan and Kirgizstan. In all these conflicts the flame of war is now extinguished, but hostility is still smouldering, and any of them may well break out any moment as it did in Karabakh.

That war, however, did not resolve the conflict at all. In Azerbaijan sentiments of nationalist revenge were pumped up (suffice it to say, that memorial graves of the Great Patriotic war heroes in the capital of Baku were replaced by the victims of 1994 war with Armenia). And in Armenia heroes of the war made up a certain clan, that ruled until Spring 2018 under the leadership of Serge Sarkisyan. In spring 2018 there happened a sort of colour revolution, as the result power was taken by Nikol Pashinyan. In attempt to compensate for his lack of the military authority of his predecessor, he took even more radical position in relations with Azerbaijan. Meanwhile Pashinyan’s takeover had a negative impact on Armenian relations with Russia as he took power as a pro-western neoliberal, a sort of Armenian Saakashvily. Under Pashinyan the official Armenian media got closer to the western coverage of events, rather than to Russian. At the same time Armenia still remains a member of the Collective Security Treaty Organisation, while Azerbaijan left it twice in 1994 and in 1999. Subsequently the Azerbaijan ruling class reoriented from Russia to Turkey or Iran. It is no less important that the water supply system in Armenia as well as its cellular mobile network are owned by the Russian monopolies. So the Kremlin is objectively interested to change Pashinyan by another leader in the next elections in order to secure Russian imperialist interests from the growing influence of anti-Russian opposition supported by the Armenian diaspora.

At the same time Turkey has escalated its imperialist pan-Turkish policy and influence in Asia. An important part of the policy is the modernisation of the Turkish army. Russian air-defense system S-400, modern American planes, and, even more important, military helicopters and unmanned aircraft (drones). Some of the weaponry turned up in Azerbaijan, and before the conflict there were joint military exercises of Turkey and Azerbaijan.

It is very important to note, that one of the key factors, that aggravated the Azery-Armenian conflict is the weakness of Communist and workers’ movement in both countries. Moreover, even those few Communist and workers organisations that still exist failed to work out their joint internationalist position on the conflict. As the result the working people in both countries fell under the influence of their national bourgeoisie, reinforced by the Turkish imperialism in Azerbaijan and the Armenian diaspora in America.

Several days of military actions demonstrated high moral Armenian spirit as well as the military-technical superiority of Azerbaijan. With their unmanned aircraft and military helicopters Azerbaijan won air supremacy and inflicted heavy losses on the armed forces of Karabakh. For instance they destroyed the S-300 Karabakh air-defense system. However, the Azery blitzkrieg failed and the Armenian army managed a counteroffensive that was especially successful during three days of heavy rain, when unmanned aircraft cannot operate. The Armenian army used a jamming installation that blocks the signals for unmanned aircraft, but they had only one and it could help only within 60 kilometres, not more.

The military ceasefire achieved through the Russian mediation was very fragile, and was used by both sides for reinforcement of their troops. Intensive growth of nationalism from both sides is going on, and even in Moscow there were several cases of clashes between Azery and Armenian people.

In the face of this ever-growing tragedy it is most important that Communist and progressive forces should say their internationalist word. The main message should be only one: the self-determination of Karabakh, that includes also the Azery minority, is a verified fact. This National self-determination should be recognised by the whole international Communist movement. At the same time this self-determination should not be abused for the capture of the territory of Azerbaijan and for any discrimination of Azery people, and the borders of Karabakh should be opened to both Armenia and Azerbaijan.

So it would be in the interests of the Azery and Armenian people to recognise the self-determination of Karabakh in exchange for the Azery territories occupied during the 1994 war, as well as to guarantee nonaggression and the obligation to act by peaceful means only. And it is no less important to say, that as long as Armenia and Azerbaijan follow the capitalist way and are influenced by imperialist rivals, there can be no ultimate peace in Karabakh. And Russian and Turkish communists should also oppose any interference of their imperialists in the conflict. And the sooner this conflict is resolved on democratic grounds, the faster the working people of both countries will turn their weapons against their ruling classes.