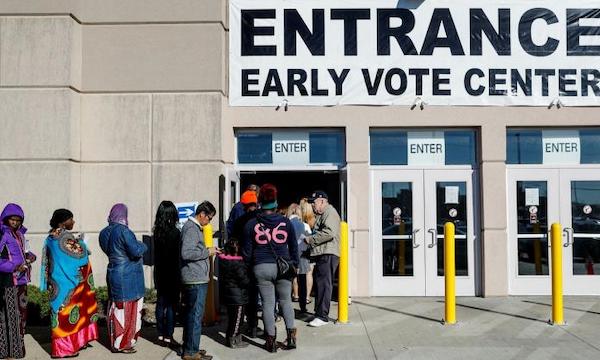 The United States boasts one of the most farcical democratic systems to have been invented. The country’s constitution is an eighteenth-century relic penned by merchants and slave owners, amendments to which can be blocked by as few as 13 states representing less than 4 percent of the population. Its Supreme Court, conservative by nature and stacked with tenured-for-life justices, provides an institutional anti-majoritarian check on the popular will.

Its Senate, the more powerful of the two wings of the Congress, represents states, and thereby territory, rather than people. The weight of a vote in the least populous state is currently 68 times greater than one cast in the most populous. A minority of the population elect more than 80 percent of senators, thereby giving greater national influence to those living in rural areas. It is “the most powerful source of institutional racism in American life”, writes New York magazine columnist Jonathan Chait.

The roughly 2.7 million people living in Wyoming, Vermont, Alaska, and North Dakota, who are overwhelmingly white, have the same number of Senators representing them as the 110 million or so people living in California, Texas, Florida, and New York, who are quite diverse.

Presidential elections are conducted through a state-based electoral college system that, again, gives disproportionate influence to smaller, more rural states at the expense of the urban working class. Even then, tens of millions of working-class people are disenfranchised in various ways. There’s weekday voting, which makes it harder to get to polling stations. There’s polling station removal to make queues longer, and polling station relocation to make them harder to reach—usually taking them from Black or Latino areas and putting them far away, in a place not serviced by public transport. There’s the scourge of systematic gerrymandering—the process through which politicians choose their own voters by drawing the district boundaries. (In 2018, for example, Republicans won nearly two-thirds of the seats in the Wisconsin state assembly, despite receiving a minority of the votes.)

There are voter purges—just wiping people from the electoral rolls—and measures to make it more difficult to register. There’s denial of citizenship and therefore voting rights for up to 10 million predominantly Latino workers and denial of statehood for Puerto Rico, which means people there don’t get representation in the Congress. And there’s the disenfranchisement of those with felony convictions—more than 6 million people, disproportionately Black.

To top it all off, the federal government, the state governments, the local governments, the governorships and the mayorships are tightly controlled by a 166-year-old capitalist party duopoly dominated by corporate finance. No third party in all that time has been able to loosen the grip of the capitalist class over the machinery of “democracy”—no socialist party, no social democratic party, no labour party, no communist party.

“The preferences of the average American appear to have only a minuscule, near-zero, statistically non-significant impact upon public policy”, professors Martin Gilens and Benjamin Page concluded in a 2014 article published in Perspectives on politics, the journal of the American Political Science Association. “In the United States, our findings indicate, the majority does not rule … When a majority of citizens disagrees with economic elites or with organized interests, they generally lose.”

It’s no wonder that progressives in the United States talk about the need for a democratic revolution. Yet, while you have to scoff at the conceit of US politicians proclaiming their system the greatest democracy on earth, addressing the problems outlined above would not solve the underlying issue. Even countries whose electoral systems are less imperfect than the US model are beset by the same fundamental flaw: no matter who is elected to the parliament, congress or assembly— and no matter who becomes prime minister, chancellor or president—most of the consequential decisions about how society operates are made by the people who own or control the wealth. Those people are largely unaccountable and make up a small minority of the population.

For example, the top twelve U.S. billionaires have a combined wealth of more than US$1 trillion. While those people buy influence and bankroll the campaigns of politicians across the country, that’s actually not the main thing. When you look at the names on the list, you can start to see the tremendous social power they exert—not through having money, but through running companies.

There’s Jeff Bezos, owner of Amazon and the Washington Post, Bill Gates of Microsoft, Facebook’s Mark Zuckerberg, Tesla’s Elon Musk, Steve Ballmer, owner of the National Basketball Association, Google co-founders Larry Page and Sergey Brin, and the Walton family, owners of the world’s largest retailer, Walmart. And there are more than 600 other billionaires, not to mention the multimillionaires who sit on corporate boards or are the CEOs of the major corporations.

They control the media, the manufacturing businesses, the transport companies, the electricity supply and distribution, the telecommunications infrastructure, agriculture and horticulture—collectively, they own and control everything needed to keep society functioning. They, and their hundreds of thousands of managers, choose what gets produced and where it gets produced. They choose who gets hired and who gets fired. Through their investment decisions, they choose whether the electricity is generated from renewable sources or from fossil fuels. They choose what is printed in the newspapers and what gets broadcast on TV. They control the development of the cities, deciding what gets built there and who gets to live where.

No-one voted to give them all this control. And regardless of who wins the next election, they will remain in charge. Whether it’s Donald Trump or Joe Biden, Walmart workers will still go to work the next day for the same shitty pay and the same shitty health care. Workers at Amazon won’t get extra breaks. Cleaners won’t get holiday pay, or a wage high enough to take one. Homeless people won’t all of a sudden find themselves in accommodation. The richest 1 percent of the population will still control about 40 percent of the wealth.

And the state over which the politicians are said to rule will not change in the least. The heavily armed police will still roam the streets, protecting the property of the wealthy and targeting the poor and racial minorities. Blacks will still be locked in prison at alarming rates. The US military will still be stationed in dozens of countries, the Central Intelligence Agency will still destabilise democratically elected governments around the world if they don’t follow Washington’s line and the national security state will continue to spy on people everywhere.

In reality, the people who do all the work to make society function—garbage collectors, cooks and cleaners, nurses and bus drivers, shelf stackers and agricultural workers, factory hands and construction workers—have almost no say over the fundamentals. If that’s to change, the U.S., and the rest of the world, need, not just a democratic revolution, but a social revolution.

That will mean extending democracy into the economy, so those who do the work get a say over what is produced and for whom. After all, the resources of the planet—the land, the minerals, the waterways, the science and technology that are the result of centuries of collective human endeavour—should be there for the benefit of all, not a privileged few.

Are there going to be more penthouses and condos for the wealthy, or more public housing and hospitals? Will there be another golf course, or a public park? Should ever more tollways be built, or should there be a massive public transit system that everyone can use? Should we keep using coal for electricity, or should those workers be given different jobs as we make more solar cells? How should cities be built in the first place? Do we need all those McDonalds and other takeaway shops, or can we turn most of them into public childcare centres and community kitchens since they already have cooking facilities and playgrounds?

All these questions and many more should be answered by the people who do all the work, not by the minority who have accumulated or been born into wealth. Only then could we say that we live in a democratic society—one totally responsive to the needs of the majority of the population, because it is run by them.

Ben Hillier is an editor for Red Flag.
View all posts by Ben Hillier →