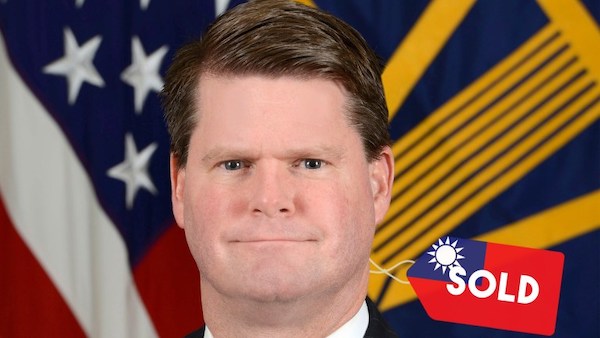 The “Fortress Taiwan” arms deal overseen by ex-Assistant Secretary of Defense Randall Schriver is one of the most provocative U.S. moves against China in years–and a big win for his think tank’s arms industry and Taiwanese patrons.

When the United States finalized a set of seven arms sales packages to Taiwan in August, including 66 upgraded F-16 fighter planes and longer-range air-to-ground missiles that could hit sensitive targets on mainland China, it shifted U.S. policy sharply toward a much more aggressive stance on the geo-strategic island at the heart of military tensions between the United States and China.

Branded “Fortress Taiwan” by the Pentagon, the ambitious arms deal was the engineered by Randall Schriver, a veteran pro-Taiwan activist and anti-China hardliner whose think tank had been financed by America’s biggest arms contractors and by the Taiwan government itself.

Since assuming the post of Assistant Secretary of Defense for Asian and Pacific Security Affairs in early 2018, Schriver has focused primarily on granting his major arms company patrons the vaunted arms deals they had sought for years.

The arms sales Schriver has overseen represent the most dangerous U.S. escalation against China in years. The weapons systems will give Taiwan the capability to strike Chinese military and civilian targets far inland, thus emboldening those determined to push for independence from China.  Although no U.S. administration has committed Washington to defend Taiwan since it normalized relations with China, the Pentagon is developing the weapons systems and military strategy it would need for a full-scale war. If a conflict breaks out, Taiwan is likely to be at its center.

Returning the favor to arms makers and Taiwanese government donors

Schriver is a longtime advocate of massive, highly provocative arms sales to Taiwan who has advanced the demand that the territory be treated more like a sovereign, independent state. His lobbying has been propelled by financial support from major arms contractors and Taiwan through two institutional bases: a consulting business and a “think tank” that also led the charge for arms sales to U.S. allies in East Asia.

The first of these outfits was a consulting firm called Armitage International, which Schriver founded in 2005 with Richard Armitage, a senior Pentagon and State Department official in the Reagan and George W. Bush administrations. Schriver had served as Armitage’s Chief of Staff in State Department and then as Deputy Assistant Secretary of State for East Asian and Pacific Affairs. (Armitage, a lifelong Republican, recently released a video endorsement of Joseph Biden for President).

As a partner in Armitage International, Schriver was paid consulting fees by two major arms contractors–Boeing and Raytheon–both of which hoped to obtain arms sales to Taiwan and other East Asian allies to compensate for declining profits from Pentagon contracts.

Schriver started a second national security venture in 2008 as President and CEO of a new lobbying front called The Project 2049 Institute, where Armitage served as Chairman of the Board. The name of the new institution referred to the date by which some anti-China hawks believed China intended to achieve global domination.

From its inception, The Project 2049 Institute focused primarily on U.S. military cooperation with Northeast Asian allies–and Taiwan in particular–with an emphasis on selling them more and better U.S. arms. Schriver, known as the Taiwan government’s main ally in Washington, became the key interlocutor for major U.S. arms makers looking to cash in potential markets in Taiwan. He was able to solicit financial support for Institute from Lockheed Martin, General Atomics, BAE and Raytheon, according to the Institute’s internet site, which provides no figures on the amounts given by each prior to 2017.

Equally important, however, is the Project 2049 Institute’s heavy dependence on grants from the government of Taiwan. The most recent annual report of the Institute shows that more than a third of its funding in 2017 came either directly from the Taiwan government or a quasi-official organization representing its national security institutions.

Project 2049 received a total of $280,000 from the Taiwan Ministry of Defense and Taiwan’s unofficial diplomatic office in Washington (TECRO) as well as $60,000 from the “Prospect Foundation”, whose officers are all former top national security officials of Taiwan.  Another $252,000 in support for Schriver’s Institute in 2017 came from the State Department, at a time when it was taking an especially aggressive public anti-China line.

By creating a non-profit “think tank,” Schriver and Armitage had found a way to skirt rules aimed at minimizing conflicts of interest in the executive branch. The Executive Order 13770 issued by President Donald Trump in early 2017 that was supposed to tighten further restrictions on conflicts of interest barred Schriver from participation for a period of two years “in any particular matter that is directly and substantially related to my former employer or former clients….”

However, the financial support for Project 2049 from Boeing, Lockheed-Martin, General Atomics, Northrop Grumman and Raytheon, and from Taiwanese official and quasi-official bodies were considered as outside that prohibition, because they were not technically “clients.”

Brought into the Pentagon at the beginning 2018 to push China policy toward a more confrontational stance, Schriver spent 2018 and the first half of 2019 moving proposals for several major arms sales to Taiwan–including the new F-16s and the air-to-ground missiles capable of hitting sensitive targets in China–through inter-agency consultations.  He secured White House approval for the arms packages and Congress was informally notified in August 2019, however, Congress was not notified of the decision until August 2020. That was because Trump was engaged in serious trade negotiations with China and wanted to avoid unnecessary provocation to Beijing.

Lockheed Martin was the biggest corporate winner in the huge and expensive suite of arms sales to Taiwan. It reaped the largest single package of the series: a ten-year, $8 billion deal for which it was the “principle contractor” to provide 66 of its own F-16 fighters to Taiwan, along with the accompanying engines, radars and other electronic warfare equipment.

The seven major arms sales packages included big wins for other corporate supporters as well: Boeing’s AGM-84E Standoff Land Attack Missile (SLAM), which could be fired by the F-16s and hit sensitive military and even economic targets in China’s Nanjing region, and sea surveillance drones from General Atomics.

In February 2020, shortly after Schriver left the Pentagon, the Taiwanese President Tsai Ing-wen received the lobbyist in her office in Taipei and publicly thanked him for having “facilitated the sale of F-16V fighter jets to Taiwan and attached great importance to the role and status of Taiwan in the Indo-Pacific region.” It was an extraordinary expression of a foreign government’s gratitude for a U.S. official’s service to its interests.

Having delivered the goods for the big military contractors and the Taiwan government, Schriver returned to the Project 2049 Institute, replacing Armitage as chairman of the board.

The arms sales to Taiwan represented a signal victory for those who still hoping to reverse the official U.S. acceptance the People’s Republic of China as the legitimate government of all of China. Ever since the 1982 U.S.-China Joint Communique, in which the United States vowed that had “no intention of interfering in China’s internal affairs or pursuing a policy of “two China’s” or “one China, one Taiwan”, anti-China hardliners who opposed that concession have insisted on making the 1979 Taiwan Relations Act, which called for the United States to sell Taiwan such arms “as may be necessary to enable Taiwan to maintain a sufficient self-defense capability” as keystone of U.S. Taiwan policy.

The neoconservative Project for a New American Century (PNAC) led by William Kristol and Robert Kagan wanted to go even further; it pushed for the United States to restore its early Cold War commitment to defend Taiwan from any Chinese military assault. Thus a 1999 PNAC statement called on the United States to “declare unambiguously that it will come to Taiwan’s defense in the event of an attack or a blockade against Taiwan, including against the offshore islands of Matsu and Kinmen.”

After leaving the World Bank in 2008 amidst a scandal involving his girlfriend, Paul Wolfowitz–the author of that 1999 statement on East Asia–turned his attention to protecting Taiwan. Despite the absence of any business interest he was known to have in Taiwan, Wolfowitz was chairman of the board of the U.S.-Taiwan Business Council from 2008 to 2018. The Project 2049 Institute was a key member of the Council, along with all the major arms companies hoping to make sales to Taiwan.

During the first days of Wolfowitz’s chairmanship, the U.S.-China Business Council published a lengthy study warning of a deteriorating air power balance between China and Taiwan.  The study was obviously written under the auspices of one or more of the major arms companies who were members, but it was attributed only to “the Council’s membership” and to “several outside experts” whom it did not name.

The study criticized both the Bush and Obama administrations for refusing to provide the latest F-16 models to Taiwan, warning that U.S. forces would be forced to defend the island directly if the jets were not immediately supplied.  It also called for providing Taiwan with land-attack cruise missiles capable of hitting some of the most sensitive military and civilian targets in the Nanjing province that lay opposite Taiwan.

The delicacy of the political-diplomatic situation regarding Taiwan’s status, and the reality of China’s ability to reunify the country it chooses to do so has deterred every administration since George H.W. Bush sold 150 F-16 fighter jets to Taiwan. That was, until Shriver’s provocative “Fortress Taiwan” sale went through.

The triumph of corporate and foreign interests in determining one of the most consequential U.S. decisions regarding China is likely to bedevil U.S. policy for years to come.  At a moment when the Pentagon is pushing a rearmament program based mainly on preparation for war with China, an influential former official backed by arms industry and Taiwanese money has helped set the stage for a potentially catastrophic confrontation.