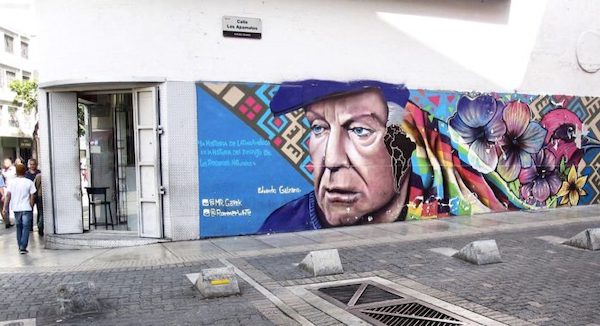 In 1971 and 1972 two of the most important books of the 20th century were published–volumes that have made an enormous difference to scholarship and activism. In 1971 the Uruguayan journalist and writer, Eduardo Galeano, published, Open Veins of Latin America: Five Centuries of the Pillage of a Continent. The book has sold over a million copies and been translated into more than a dozen languages. The following year Walter Rodney’s How Europe Underdeveloped Africa was published. Rodney’s book took a similar approach, examining the history of slavery and colonialism across Africa. Like Galeano, he examined how a continent was driven back–‘underdeveloped’–by European occupation and economic control. In this blogpost, Brian M. Napoletano, Héctor Ignacio Martínez Alvarez and Pedro S. Urquijo look again at Galeano’s Open Veins of Latin America–next week we will be examining the context and content of Rodney’s 1972 masterpiece.

In reading The Open Veins of Latin America, one cannot help but appreciate Eduardo Galeano’s almost poetic style (aptly conveyed in Cedric Belfrage’s English translation) and genuine passion in narrating what could be called an optimistic tragedy: the tragedy being the suffering Latin America has borne, the optimism being in the recognition that this is not the region’s natural or inevitable destiny, but has been imposed on it through its subjugation to the capitalist system, and is therefore capable of being changed–albeit not without concerted effort and considerable risks. In understanding what underlies Galeano’s passion, it is helpful to consult a brief note that appears at the start of later Spanish editions (below is our own translation of the Spanish introductory note):

I wrote The Veins to spread ideas of others and my own experiences that may, in an authentic manner, help us a tiny bit to clear up the questions that have eternally haunted us: Is Latin America a region of the world destined to suffer humiliation and poverty? Destined by whom? Is it God’s fault? Nature’s fault? Is not its misery a product of history that, made by humans, can therefore be undone by humans?

This book was written with the intention of imparting certain facts that official history, the history told by the victors, hides or misrepresents. I am aware that it could be considered sacrilegious for this popular textbook to treat political economy in the style of a love story or a pirate novel.

I see no vanity in my joy of finding, in the course of time, that The Veins has not been a silent book.

In the last chapter, where the content of this note is elaborated on in depth, Galeano went on to explain that (here we quote from Cedric Belfrage’s English translation):

Open Veins seeks to portray the past as something always convoked by the present, a live memory of our own day. A search for keys in past history to help explain our time—a time that also makes history–on the basis that the first condition for changing reality is to understand it.

Together, these two excerpts succinctly express Galeano’s key thesis, the powerful narrative in which he presents it, and his ultimate intent, though pointing out that ‘The Veins has not been a silent book’ arguably understates just how profound its impact was–and still is. In many ways,Open Veins can be seen as a manifesto of an intense period of social and revolutionary struggle in Latin American history, marked on one end by the Cuban Revolution and on the other by Pinochet’s 11 September 1973 coup d’état in Chile, which signaled the onset of another wave of renewed terror and imperial intervention in the region. Writing at a time when the choice between further misery and revolution was coming to a head in many places, Galeano sought to render Latin America’s past understandable to its people in a way that would help them recognize its place in the global capitalist system and encourage the region’s tradition of rebellion, insurrection, and revolution to build a new future.

Despite attempts to drown this struggle in blood, fifty years later hope for such a future can again be seen in struggles throughout the region, from the struggles of workers in the maquiladoras of Northern Mexico against the ‘despotism of the companies’ who continue to sacrifice workers to COVID-19 to the protesters who flooded the streets of Chile’s cities again in advance of the 25 October 2020 referendum to replace the constitution installed under Pinochet. Among the ‘ideas of others’ that Galeano sought to disseminate, dependency theory, the thesis of internal colonialism, and ideas of national liberation are central, especially in the forms advanced by André Gunder Frank, José Carlos Mariátegui, and others in Latin America and the Monthly Review school, including Samir Amin, Paul Baran, and Paul Sweezy. In addition to spreading these ideas throughout Latin America, Galeano helped bring Latin American ideas and concepts to the rest of the world.

Galeano begins the story of Latin America’s dependency in Open Veins with the Conquista. Through a combination of technological advantages (especially in the means of violence and destruction), a strategy of playing empires against each other, an arsenal of deadly pathogens carried in the body of every European, and an unparalleled blood lust, the conquistadores destroyed America’s existing civilizations and seized the wealth of Latin America and Africa to undertake their own development. Put more simply, Europe (and later North America) did not (and does not continue to) develop faster than Latin America, but at the latter’s expense. Or, as Galeano puts it, ‘Latin American underdevelopment is not a stage on the road to development, but the counterpart of development elsewhere.’[1]

Latin America was forcibly dragged into the sphere of global capitalism, but the colonial framework imposed on it–very different to that of the 13 colonies to its north–prevented the internal development of significant industry within the region and divided agriculture among vast and inefficient estates known as latifundios. Latin America served, and continues to serve, in a subordinate role as both a source of raw materials and a market for manufactured commodities. Galeano’s account begins with the ways in which Latin America’s resources were plundered through direct colonialism, and then slowly shifts focus to the contemporary mechanisms that achieve the same sort of plunder in a different form.

With the Conquista, a colonial structure was established under the Spanish and Portuguese aristocracy to service them, leading to the drain of Latin America’s gold and silver, which the aristocracy wasted on luxury imports (thereby ruining their own industries) and, ironically, attempts to defend their decrepit feudal order against the very industrial capitalists of Europe that they were financing with Latin America’s metals. Latin America’s fertile soils were also expropriated and turned into latifundios (and to a lesser extent minifundios), to supply Europe and later the U.S. with raw materials such as cotton, sugar, rubber, and other basic commodities, while supplying most of the region’s inhabitants with hunger and poverty. According to Galeano, the 13 original colonies of North America, in contrast, had the benefit of being unimportant to Europe, in the sense that they did not initially yield anything Europe could not cultivate on its own soils, or obtain much more cheaply from Latin America. Returning to the subsoil, Galeano also describes how it was, and still is, plundered to provide Europe and the U.S. with key minerals (and guano, a key source of fertilizer prior to the development of synthetic nitrates after the first World War), such as tin, copper, and iron, used in manufacture, and of course the all-important oil on which fossil-fueled capitalism depends.

When Latin American nations finally began obtaining nominal (political) independence in the mid-nineteenth century, various European nations and North America had already industrialized much of their industry at the expense of Latin America and Africa, allowing the former to flood the newly declared nations with commodities–undermining much of what little domestic industry had managed to take root–under the doctrine of “free” trade, which was frequently backed by imperial violence. The new national bourgeoisies and foreign industries retained social-economic arrangements, such as the latifundios, inherited from direct colonial rule and willingly suppressed domestic industry. ——This prevented the region from turning its resources to internal industrial development and any meaningful degree of liberation. Throughout his book, Galeano repeatedly emphasizes the complicity of national bourgeoisies, or what Gunder Frank referred to as Latin America’s lumpen-bourgeoisie, whose interest is in maintaining Latin America’s subordinate position.

Under U.S. imperialism following the second World War, the suppression of industrial development in Latin America seemed to end, and U.S. industry itself began investing in the region. However, Galeano argues that this was largely yet another mutation in the mechanisms of dependency, as it essentially placed industrialization in the hands of U.S. and other foreign capitals. This seems even more apparent in the twenty first century, when such industrialization has evolved into global commodity chains that allow monopoly-finance capital to take advantage of Latin America’s abundant supply of cheap labor-power while extracting massive surpluses (see Intan Suwandi’s 2019 Value Chains and John Smith’s 2016 Imperialism in the Twenty-First Century, both published by Monthly Review Press of New York). On top of this is the penetration of finance capital through the proliferation of (primarily US) banks and similar financial institutions throughout the region and the long-term bleeding of national economies through onerous debts, which has further consolidated foreign capital’s control over the region.

Equally important to this narrative is the intersecting counter-narrative of Galeano’s account. That is, the above-mentioned tradition of resistance, rebellion, revolution, as well as the constant pursuit of other ways of organizing social life. Though often met with overwhelming violence (almost always with the help of the imperium), Latin America continues to be a fertile ground for the growth and propagation of such efforts and movements.

Fifty years later, Galeano’s historical narrative continues to speak to the present, even as the neoliberalism that was just then emerging has ravaged the region. On the one hand, the colonial legacies of emptied mines, razed forests, devastated soils, and terrorized peoples still abound and multiply in Latin America, and the basic principle of uneven development persists. Indeed, when a prominent organ of the imperium declares that lives in the South should be sacrificed to COVID-19 in order to protect commodity chains feeding capitalists in the North, the basic contours of imperialism and colonialism that Galeano described seem difficult to deny.[2] On the other hand, struggle and resistance also continues throughout the region, even in the face of neo-fascism, as the struggles of dispossessed peasants, indigenous movements for autonomy and self-determination, calls for wide-ranging political and economic changes, and the recent explosion of women’s demands for dignity and equality all attest.

Brian M. Napoletano teaches and researches at the Centro de Investigaciones en Geografía Ambiental at the Universidad Nacional Autónoma de México. His research is focused on geographic expressions of the metabolic rift, with a particular emphasis on capitalist urbanization and conservation.

Héctor Ignacio Martínez Alvarez is a PhD student in Geography at the Universidad Nacional Autónoma de México. His dissertation deals with the evolution of Marxism in Latin American geography and the role of theories of dependency.

Pedro S. Urquijo teaches and researches at the Centro de Investigaciones en Geografía Ambiental at the Universidad Nacional Autónoma de México. His research is focused on historical geography, environmental history, and the history of geography.

[2] We refer here to a 10 April 2020 piece in Foreign Policy by Ahmed Mushfiq Mobarak and Zachary Barnett-Howell titled, ‘Poor countries need to think twice about social distancing.’ Notably, U.S. president Donald Trump, British Prime Minister Boris Johnson, Brazilian president Jair Bolsonaro, and many others in the world’s imperial and sub-imperial bourgeoisie, in their willingness to murder their domestic workers as well as those across borders, have generally confirmed Galeano’s observations regarding internal colonialism.