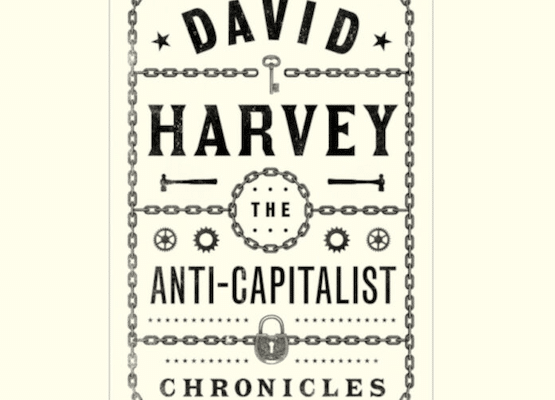 For anyone in the Anglophone world with an interest in Marx or political economy, David Harvey is probably a figure who needs no introduction. The British professor, who celebrated his 85th birthday on 31 October, is one of the most prominent theorists and spokespersons of the contemporary Western left, whose studies of Marx’s Capital and recent successful forays into podcasting will be familiar to many readers.

It is from the latter source (also entitled “David Harvey’s Anti-Capitalist Chronicles”) that much of this present volume has been drawn, or adapted into book form, covering a range of topics, from surplus value, the history of neoliberal capitalism, alienation and climate change to political responses to the covid-19 pandemic.

Harvey’s great skill, in writing as in speech, is to explain complex theories, histories and ideas in a clear, conversational style that avoids the pitfalls of impenetrability and prolix that characterise much of contemporary discourse on the left. This light, informal style certainly benefits from the book’s origins as spoken material as Harvey moves from subject to subject with an effortless momentum. As a consequence the book is suited to seasoned readers of left theory as well as those just curious to explore critiques of the iniquitous capitalist system we live under.

Harvey’s status on the left is that of a sort of benign elder statesman whose popularity transcends traditional sectarian categories. This is partly due to his congenial and gentle personality, as well as his tendency to generally avoid controversy in his interventions in popular discourse. Or at least this was so until recently, when some of his pronouncements resulted in an enormous amount of well-publicised criticism from fellow-Marxists.

These criticisms centred on his assertion that capitalism, in the monstrous, globe-encompassing manner in which it exists at the present day, is “too big to fail,” and that the notion that a revolution could quickly overturn this economic system to build socialism is a “fantasy” that belongs solely to the material conditions that prevailed in the early part of the twentieth century.

A debate ensued over whether these statements constituted a rejection of Marxism, whether they had been misinterpreted or exaggerated or were simply reactionary in nature, the privileged musings of a professor resident in New York, long since detached from any real-world proletarian struggle.

For better or worse, these divisive claims are repeated here, and fleshed out somewhat in the opening chapter, titled “Global unrest.” If Harvey begins this passage in a tone of finger-wagging reprimand to the younger generation (warning that, because of the all-pervasiveness of capital, the upheaval associated with a revolutionary period would be “potentially lethal for a large portion of the global population”), he ends it with the far less controversial thought that “revolution is a long process not an event.”

One might very well argue in turn that the all-pervasive capitalist system in which human life persists is nonetheless quite literally lethal already for a large portion of the global population, and this fact is reason enough for its violent overthrow. But perhaps it is simply this tendency to focus on macro-economics, for want of a better term, to the exclusion of the realities of class struggle that is Harvey’s great weakness, albeit one he shares with many in today’s left.

The book is rife with topics to which Harvey applies his brisk and broad critical lens. He rarely gets bogged down in historical detail, offering instead a critical, whistle-stop tour of his subjects: the Chinese tech industry, financialisation of the economy, CO₂ emissions under capitalism, and more, all get this treatment. However, he sometimes makes time for welcome anecdotal or literary asides, on his visits to Nanjing, or quoting Shakespeare to discuss the rise of merchant capitalism. His breadth of knowledge and diverse interests are clearly evident, and these enrich an already compelling document on a range of important issues facing the planet right now.

All of which goes to say that this is an eminently readable, diverting and informative book from a distinguished and even beloved figure of the left. However, it should be approached with the caveat that, for all Harvey’s analytical qualities—and they are many—too often he is content in his pronouncements to merely suggest a bargaining with capitalism, rather than call for its overthrow: for example when he declares the necessity for the capitalist state to mitigate the worst excesses of finance capital, or generally to act as a bulwark against the economic system’s inevitable tendency towards increased exploitation in the name of profit (a tendency he understands well!).

Such social-democratic attitudes, if they can be labelled as such, may be a necessary consequence of abandoning one’s revolutionary aspirations in the here and now.

It’s hard to escape the feeling that Harvey’s quite lucid criticisms of the direction in which our economic system is and has been going deserve a more inspiring and radical over-arching message than to aim small and set our sights low; because the capitalists are strong, after all. One is reminded of Marx’s immortal words in his criticism of Feuerbach:

The philosophers have hitherto only interpreted the world in various ways; the point, however, is to change it.