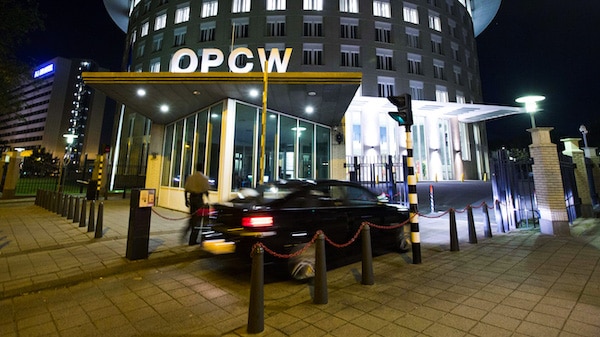 This should be a global scandal,” said journalist Aaron Maté on the suppression of evidence from experts from the Organization for the Prohibition of Chemical Weapons (OPCW) in order to push for war in Syria. “This is the U.S. government bombing Syria based on allegations that were later found by the investigating team to be false. But then once that team came back to write their report they were pressured by the U.S. government and had their evidence censored.”

Unfortunately, it has not become a global scandal. With very few exceptions, media across the spectrum have refused to report on the fact that the respected Nobel Peace Prize-winning body appears to be suppressing its own experts’ findings on Syria to suit Washington’s agenda. There has been no mention of the continuing scandal in The New York Times, Washington Post, CNN, CNBC, or MSNBC. Even alternative media like Democracy Now! Have made only fleeting reference to it. “Since that censorship there has been a complete media censorship by everybody…all the major networks. Even adversarial progressive networks,” Maté added.

Perhaps the most notable case of omission, however, was Newsweek. Journalist Tared Haddad attempted to cover the story but was continually rebuffed by higher-ups who squashed his reporting. Haddad ended up very publicly quitting, rather than allow the scandal to be brushed under the carpet.

“It is certainly not a lack of facts or evidence that is stopping mainstream media from reporting the issue,” Piers Robinson, co-director of the Organization for Propaganda Studies told MintPress, but “covering it would force mainstream media outlets to ask challenging questions of the U.S., UK, and French governments as well as the OPCW itself.” Thus, readers would be forgiven for not knowing the details of what happened.

The birth of a cover-up

In April 2018, dozens of people were found dead in a suspected chemical weapons attack in the Damascus suburb of Douma. The United States government and its allies immediately blamed Syrian President Bashar al-Assad and responded with rounds of airstrikes, bombing targets around the country. Support for the action was bi-partisan and enjoyed widespread media approval. In fact, a survey by Fairness and Accuracy in Reporting found that not one of the top 100 U.S. newspapers by circulation opposed the Trump administration’s response.

A team from the OPCW was sent to Douma to investigate the incident. Its report gave some credence to Washington’s accusations. While far from conclusive, it did suggest that it was “likely” that there was indeed some form of chemical weapons used, possibly an air attack that involved dropping chlorine canisters on the city. Although the OPCW refused to speculate on who was responsible, the suggestion of an aerial strike indicated Syrian government forces, the most equipped for such an attack, were to blame.

The report was seized upon by the Trump administration and the media (often the last time the organization has been mentioned in their pages) as justification for U.S. actions. However, its credibility was quickly undermined by the leaking of internal memos from experts on the ground who claimed that their opinions had been censored and that in their estimation, the canisters were likely placed at the site of the incident, suggesting an inside job from American-allied forces.

Senior OPCW officials reportedly ordered the removal of “all traces” of dissenting opinion from the published document, however. The organization’s first president, Brazilian diplomat Jose Bustani, expressed his grave concerns over the news, fearing the OPCW, which was founded in 1997 to represent all 193 of its member states, had become a tool of the U.S. government.

The scandal continued to grow throughout 2020 as OPCW experts came forward to give testimony as to how their findings had been completely manipulated or ignored in order to present a one-sided, incorrect view of events in order to further an agenda.

Things reached a fever pitch last month, however, when Bustani was invited to speak at the United Nations Security Council about his concerns but was blocked by the United States and its allies on the basis that he was not in a position to provide expert details about chemical weapons or the attack. “What has happened now is yet more sad proof that Western delegations fear the uncomfortable truth,” said Russia’s ambassador to the UN, Vassily Nebenzia. The Russian delegation subsequently read out Bustani’s testimony. In doing so, it was accused of undermining the legitimacy of the tribunal.

An impenetrable wall of silence

Bustani claimed the truth was being deliberately “hidden behind an impenetrable wall of silence and opacity, making any meaningful dialogue impossible.”

Regardless of whether or not there is substance to the concerns raised about the OPCW’s behaviour in the Douma investigation, hearing what your own inspectors have to say would be an important first step in mending the Organisation’s damaged reputation. The dissenting inspectors are not claiming to be right, but they do want to be given a fair hearing. As one Director General to another, I respectfully request that you grant them this opportunity,” he concluded.

“The censoring of a respected former head of the OPCW is the latest in a sad string of attempts to keep the public wildly misinformed about what really took place in Douma in 2018,” Haddad told MintPress,

Although much of what took place has now been established beyond all doubt, the OPCW’s frankly childish approach to addressing this incident shows how politicized this body has become, severely undermining its impartiality and credibility going forward. These are developments that should be deeply concerning to everyone, especially given that the real perpetrators of chemical weapons attacks are now that much more likely to go unpunished.”

This is not the first time that Bustani has run afoul of the U.S. government. In 2002, he was unlawfully removed from his position as director-general of the OPCW after contradicting U.S. claims over weapons of mass destruction in Iraq. The Bush administration under Secretary of State John Bolton threatened to kill his family if he did not resign; “You have 24 hours to leave the organization, and if you don’t comply with this decision by Washington, we have ways to retaliate against you. We know where your kids live,” Bolton told him.

The U.S. has used the Douma attack as justification for increasing sanctions on Syria, a country where at least 83% of people live below the poverty line, according to the UN. Over 13 million people are in need of humanitarian assistance. This summer, the World Food Program also warned of a potential widespread famine inside the country. Sanctions have made the importation of foods and medicine profoundly difficult, further immiserating a society already devastated from nine years of brutal civil war, in which virtually every world and regional power has fueled the fighting. Ultimately, it is the Syrian people who are caught in the crossfire.

“The bottom line” from this story, Robinson stated, is that, “clearly the U.S. and its allies do not want transparency and open debate about the OPCW Douma investigation, and one can only conclude that this is the case because they know full well that their claims cannot be substantiated. Smears and censorship are the only tactics they have left.”