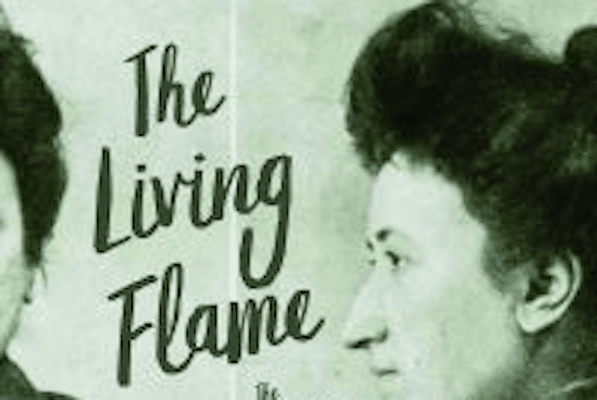 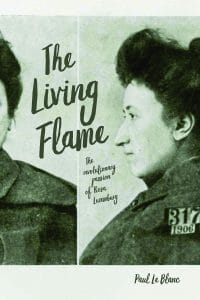 The Living Flame is a collection of essays penned by Le Blanc that outlines and elucidates Rosa Luxemburg’s most significant political interventions and theoretical contributions, while grounding the evolution of such revolutionary ideas in who Luxemburg was as a person and a woman. For any new initiate to Rosa Luxemburg’s life and politics, such as myself, Le Blanc’s essays will be useful for gaining an understanding of Luxemburg’s unique contributions to revolutionary Marxist theory, including the necessity of imperial expansion for capitalism and the utility of a democratic revolutionary strategy for mobilizing and winning the working-class to the grand project of communism. The significance of her political interventions is also elucidated including her condemnation of reformism within the Social Democratic Party of Germany (SPD) and the undemocratic processes perpetuated by the Bolsheviks. Perhaps what is most significant about this collection of essays is their enthusiastic attempt at articulating Luxemburg’s political and theoretical contributions in relation to Rosa Luxemburg the person. While this attempt often risks devolving into gendered essentialism, the reader may enjoy this more personal, and often affectionate, characterization of Luxemburg, or ‘Rosa’ as Le Blanc refers to her.

The collection begins with the essay, ‘Rosa Luxemburg (1871–1919)’, that more broadly reviews Luxemburg’s theoretical contributions and political interventions from 1871 to 1919. This piece covers Luxemburg’s best-known early writings including her polemic Reform or Revolution (1899) and her reflective ‘Stagnation and Progress of Marxism’ (1904), outlining her debate with theoretician Eduard Bernstein and her condemnation of his and the SPD’s bourgeois reformism. In this polemic, Luxemburg calls for a return to revolutionary strategy to revolutionize workers and counter conservative tendencies within the SPD. Le Blanc further outlines Luxemburg’s critique of Lenin and the Bolshevik party during this time, namely by pointing to her critique of the party’s centrism and reliance on undemocratic emergency measures. Reference to Luxemburg’s classical work, The Accumulation of Capital (1913), is also included with Le Blanc detailing her contribution to Marxist thought on imperialism, underscoring Luxemburg’s position that imperialism is essential to capitalist development rather than merely ancillary to it.

The second essay, ‘Revolutionary Mind and Spirit’, works to humanize Luxemburg the theoretician and revolutionary Marxist, with Le Blanc demonstrating that her politics must be seen as an articulation that extended from Luxemburg’s unique way of seeing the world as a person and as a woman. While this reviewer did find Le Blanc’s open admiration for Luxemburg refreshing compared to the somewhat dispassionate biographies of historical figures written by many authors in the name of objectivity, Le Blanc’s characterization of Luxemburg was a bit disconcerting at times. In this collection of essays, it did feel as if Le Blanc was toeing a precarious line between suggesting women may have a unique standpoint and relying on a sort of gendered essentialism in his characterization and admiration for Luxemburg. Descriptive terms like ‘sensuous’ may have unfairly triggered this reviewer to view Le Blanc’s admiration with a certain amount of criticality. Nevertheless, in not always clearly connecting Luxemburg’s experiences as a woman with her perspectives as a theoretician, the reader is left to wonder whether Le Blanc is relying on an essential feminine in his description of Luxemburg.

Essay four, ‘Luxemburg and Lenin on Revolutionary Organization’, fleshes out the nature of the debate between Luxemburg and Lenin and her critical stance towards the Bolshevik’s and Lenin’s strategy in the USSR. Le Blanc’s primary intention is to counter the romanticization of Luxemburg as the lone bulwark against communist centrism during the time. Beyond Luxemburg basing her critique of Lenin on Menshevik misinformation, it was not necessarily centrism that Luxemburg opposed, but the separation of the party’s intellectual vanguard from workers more generally. Luxemburg’s qualms were with Lenin’s political strategy of favouring the mere interaction, rather than the integration, of the vanguard with the proletariat because any party that adopted such a system would be incapable of making a revolution. Luxemburg herself favoured ‘social-democratic centralism’, which she defined as the ‘self-centralism’ of the advanced sectors of the proletariat. In further countering the position that Luxemburg was opposed to centrism, Le Blanc highlights her personal history of building a centralized illegal party in Poland where she ousted minorities in the same, if not, a harsher manner than Lenin did with dissidents in the Bolshevik party. A minor criticism of Le Blanc’s efforts to clarify the nature of Luxemburg’s opposition to Lenin and the Bolshevik party is that the nuance he introduces in this essay is not clearly carried forward in subsequent or previous pieces that refer to this debate, which tend to reduce Luxemburg’s criticisms against Lenin to her condemnation of the Bolshevik party’s undemocratic emergency measures.

In ‘Heart of Darkness’, Le Blanc historically situates Luxemburg’s theory of imperialism within the political currents in Germany during the early twentieth century, emphasizing that she was not only ahead of popular opinion of the time, but also the position of SPD leaders and other workers’ organizations. For example, ‘moderate’ socialist Bernstein of the SPD party suggested that although certain methods of colonialism should be condemned, the act of colonialism itself should not be since it introduced ‘savages’ to the rules of a ‘higher’ civilization. Beyond this, the essay draws on other theoretical and literary figures, including W. E. B. Du Bois and George Orwell, to exemplify the horrors of colonialism. Luxemburg’s thoughts on the repercussions of imperialism for non-Western peoples and cultures is woven throughout and often related to these other characterizations, which while interesting, can give the impression as if Luxemburg has become a supporting actor rather than the central focus of the essay.

‘Comic Book Rosa’, the eighth essay and shortest piece in this collection, reviews Kate Evans’ Red Rosa: A Graphic Biography of Rosa Luxemburg as a springboard to delve into the different and often polarizing portrayals of Luxemburg by various biographers. The purpose of drawing out these various characterizations of Luxemburg is not to dismiss some in order to valorize another. Rather, Le Blanc recognizes that Luxemburg’s portrayal can be reflective of what each author wanted her to be, while also acknowledging that this does not make these characterizations any less powerful or moving.

In ‘Rosa Luxemburg for our own Time: Struggles for Reform and Revolution in the Face of Capital Accumulation’, Le Blanc explains how Luxemburg is still relevant for contemporary times by highlighting how her commitment to democracy and alertness to the dangers of bureaucracy and elitism in working-class movements, her clear conceptualization of the ‘socialism or barbarism’ choice, and the centrality of imperialism and militarism in capitalist development are invaluable for informing revolutionary praxis today. The essay also commits to clarifying the similarities and differences between Luxemburg and Lenin, much of which has been explained in previous pieces.

‘Questions and Reflections’ is a translated interview between Le Blanc and David Muhlmann, which initially appeared in Réconcilier marxisme et démocraie (2010). Here Le Blanc speaks to the contemporary relevance of Luxemburg’s economic thought, while also describing the potential for radical change based on the current political climate in the U.S. at the time, including the election of Obama. In this piece, Le Blanc foreshadows the rise of Trump, especially when he states that the inevitable failure of Obama, due to his staunch defense of capitalism, will result in the working-class moving towards other alternatives proposed by the right. This interview also provides an opportunity for Le Blanc to clarify where he disagrees with Luxemburg, primarily regarding her writings on the constituent assembly that was dissolved by the Bolsheviks; her characterization of the USSR’s economy as a form of state capitalism, and her position that imperialism was essential for capitalism’s survival. Ultimately, Le Blanc wishes to counter some of Luxemburg’s rigidity and misperception in these areas. It’s important to note that Le Blanc recognized that the translation process from French to English of the original interview has resulted in some misinterpretations of his position despite his best efforts to revise the text.

The penultimate essay in the series, ‘Why Should We Care What Rosa Luxemburg Thought’, is Le Blanc’s intervention as a mediator between Eric Bronner and both Alan Johnson and David Camfield, the latter pair who defend Luxemburg’s revolutionary Marxism against Bronner’s revisionism. Le Blanc first provides a rebuttal to Bronner’s dismissal of Leninism, critiquing his belief in the emancipatory potential of the bourgeois democratic state, and rebuking Bronner’s speculation that Luxemburg would have supported imperialist interventions under certain conditions. In doing this, Le Blanc then notes what is useful in Bronner’s works, namely his recognition of the realities of the contemporary global working-class and the demand for the adaptation of internationalist, socialist and democratic principles to meet these new historical conditions. For Le Blanc, what is useful in Bronner further recommends Luxemburg’s contributions, including her commitment to democracy within working-class movements, because it is useful for uniting a heterogeneous working-class today.

On the whole, The Living Flame provides an opportunity for those not intimate with Luxemburg and Luxemburgism to become acquainted with her more major political interventions and theoretical contributions, while also offering a potentially novel perspective on her politics and her personhood for experts. It should be mentioned that this collection contains a significant amount overlap in content between essays, which can make reading such a book from cover to cover a bit repetitive. This may have been inevitable based on the nature of this collection where one author collates his pre-existing work on a particular topic. The gendered representation of Luxemburg also risked essentialism at times, which may leave some readers yearning for the stuffier and more stolid characterizations typically afforded male historical figures. Overall, despite these somewhat minor inadequacies, this collection provides a solid introduction to the contributions and significance of Rosa Luxemburg.