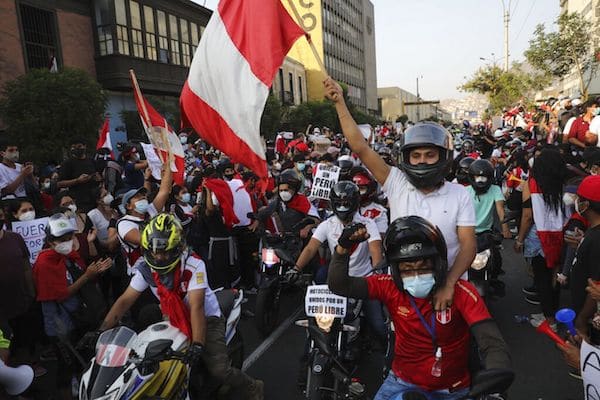 Less than one week after being sworn in as successor to Peruvian President Martín Vizcarra, impeached in what amounted to a parliamentary coup, the former president of the Congress, Manuel Merino, was forced to resign Sunday.

Demands for Merino to step down as president mounted amid overwhelming popular outrage over the bloody assault on peaceful demonstrators in Lima on Saturday in which two were killed and over 100 wounded. Over 40 youth have been reported missing. The slain protesters identified thus far are two university students, Jack Brian Pintado Sánchez, 22, and Jordan Inti Sotelo Camargo, 24.

Police have repeatedly attacked peaceful protests with tear gas, pepper spray and rubber bullets, while it is widely reported that live ammunition has also been used. 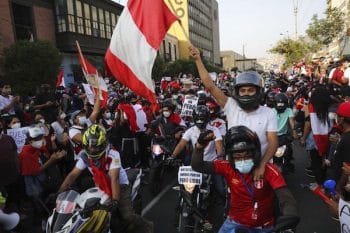 Pressure mounted on Merino after the resignation of an overwhelming majority of his extreme right-wing cabinet. Media reports said that 13 cabinet members, who had been named only last Thursday, had quit. Among those who resigned was the interior minister and ex-police general, Gastón Rodriguez, who had defended the police rampage as an act of self defense. Another of the resigning ministers had made the absurd suggestion that the massive demonstrations were not spontaneous, but rather had been organized by remnants of the Maoist guerrilla movement, Sendero Luminoso.

Right-wing figures such as Peruvian novelist and former presidential candidate Mario Vargas Llosa and Keiko Fujimori, the leader of Fuerza Popular and daughter of the ex-dictator Alberto Fujimori, jailed for his role in death squad massacres and wholesale corruption, also called for Merino to step down, as did the main employers’ association, CONFIEP.

Merino announced his resignation after the Congress gave him an ultimatum that, unless he did so, it would convene within hours to vote to remove him from office.

Who will succeed the exceedingly brief reign of Peru’s interim president is still unclear. Vizcarra is banking on a decision by the country’s Constitutional Tribunal to put him back in office. It is to issue a decision on the use by Congress of an obscure part of the 1993 Constitution that allows the removal of a president on the grounds of “permanent moral incapacity.”

The clause is widely interpreted as referring to a mental or physical inability to serve as president. In Vizcarra’s case, however, it was invoked on the pretext of allegations that he took hundreds of thousands of dollars worth of bribes for awarding construction contracts when he was the governor of the southern mining region of Moquegua.

The charges are entirely plausible. Virtually every living ex-Peruvian president has been implicated in the massive bribery and kickback scandal involving public works contracts awarded to the Brazilian construction giant Odebrecht and its Peruvian partners. For that matter, more than half of the 105 congress members voting for Vizcarra’s impeachment are facing similar charges. 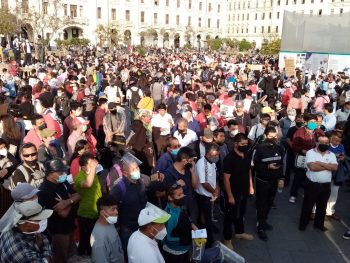 In Vizcarra’s case, however, the allegations are just that: statements given by defendants seeking plea bargains that have not even been investigated, much less adjudicated. One of the main issues underlying the push to oust Vizcarra was his support for stripping legislators of their immunity from prosecution.

In the vote on impeachment, congress members also delivered demagogic speeches denouncing Vizcarra for the catastrophic handling of the COVID-19 pandemic, saying they were casting their votes in the name of the dead. With 934,899 cases and 35,177 dead, Peru has the highest per capita mortality rate in the world, double that of the US and Brazil.

The protests were driven not by support for Vizcarra, who accepted his impeachment with barely a whimper, but by hatred for the corrupt Congress and the entire political setup in Peru. This was laid bare by the coup-like impeachment, which took place just five months before scheduled presidential elections.

Under the Constitution, Merino’s successor as the president of the Congress should succeed him. A member of the Alianza para el Progreso (APP), which played the key role in swinging congressional support to the parliamentary coup, he is not seen as viable in the face of the masses in the streets.

While the majority of the pseudo-left front, Frente Amplio, in the Congress voted in favor of the impeachment that brought Merino’s short-lived regime to power, its leading legislator, Rocío Silva Santisteban, was nominated Sunday as the new the head of the leadership of the Congress—and potentially the next president. While the list failed on the first round to gain sufficient votes, this is a patent attempt to lend a “left” face to the political maneuvers of the Peruvian bourgeoisie.

Verónika Mendoza, another pseudo-left politician who is seeking a presidential nomination, denounced Vizcarra for seeking to return to office after failing to resist the impeachment but offered no alternative outside of the call for a new constitution. Mendoza was booed and driven out of a mass demonstration in the city of Cusco, where she was justifiably seen as another member of the hated political establishment. 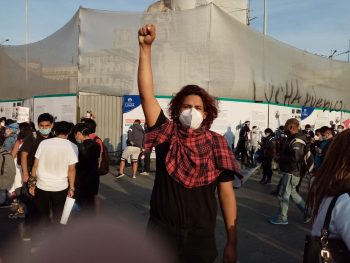 A protester in Lima.

In the last week, Peru has seen some of the largest demonstrations in its history with a national march organized last Thursday and a second one, bloodily repressed, on Saturday. Hundreds of thousands of youth chanting “Merino out” and “They messed with the wrong generation” have poured into the streets throughout the country.

The main demonstration Thursday took place in Lima. Youth flooded the capital’s central San Martin square, marching for miles from upper-middle class districts such as Miraflores, as well as from the northern and southern cones, the impoverished districts where millions of working class families live. Groups of students from the Universidad Nacional Mayor de San Marcos (UNMSM) joined in the protest.

“We are manifesting our feelings,” Marcelo, one of the marchers told the World Socialist Web Site.

Our politicians are corrupt and unqualified. It is inconceivable that Congress would vote for the impeachment when we are in a huge health crisis. They know that, but they care more about what is in their pockets. What we want is money for health and education.

An older worker who joined the protest told the WSWS:

I worked at the Crillon Hotel until it closed in 1999. Now I live off my pension which is a miserable 1,000 soles (US$ 300). In addition, I have a sick daughter. I do not know what to do. The judiciary doesn’t work. About socialism, I think it would be right to provide health care and education for all. Also, a salary that allows for a decent life.

I am against the state of emergency. Vizcarra should have finished his term. And then he can be judged on whether he received bribes from the Brazilians. It’s good to go out on the streets so that they listen to us, but then what? I can’t find an answer. I know that capitalism is destroying us.

Demonstrations also took place in cities across the country, from Tacna near the southern border with Chile, to Chiclayo and Trujillo in the north.

In a statement dripping with hypocrisy, the U.S. State Department congratulated Merino, shortly before his resignation, for saying he would allow the Peruvian elections to take place in April along with a “successful democratic transition to a new administration.” It further declared that Peruvians should enjoy the “right to democracy,” including “the right to peacefully protest.” This, from a U.S. government that has unleashed militarized police against protests and seeks to nullify the results of a presidential election!

The militancy of the youth who have taken to the streets has its roots in the insoluble crisis of Peruvian capitalism, which has been sharply accelerated by the COVID-19 pandemic. In addition to the worst mortality rate, Peru is facing the largest drop in gross domestic product of any major economy, with a 30 percent fall from the previous year and nearly half of the formal sector in urban areas becoming unemployed. Poverty has deepened sharply for the 72 percent of workers in the informal sector.

These are the conditions underlying the protracted crisis of rule within Peru’s venal capitalist oligarchy. It has taken the form of an internecine conflict between the executive and the legislature, with the military playing the role of final arbiter.

At the end of September 2019, Vizcarra shut down the Congress, with the explicit support of the Armed Forces, and ruled for months by decree. Last week, the military shifted its allegiance after meeting with Merino, backing the parliamentary coup.

If the military and the ruling class as a whole are pulling back from the coup, it is out of fear that the mass protests will become uncontrollable, sparking a broad social struggle by the working class and the most oppressed layers of the population.

Under conditions in which they are conducting a back-to-work drive in the face of continuing mass COVID-19 deaths, both the Peruvian ruling class and the transnational mining corporations are anxious to quell the political crisis with the assistance of pseudo-left forces. They know full well that their policies will require repressive measures against Peruvian workers.

The greatest danger facing the Peruvian working class is the absence of a revolutionary leadership based on an internationalist and socialist program. This must be confronted through the building of a section of the International Committee of the Fourth International (ICFI).