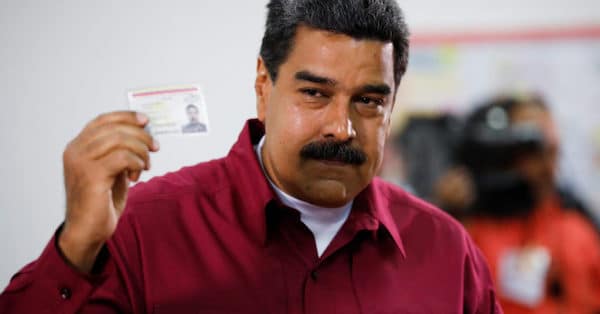 President Donald Trump’s categorical refusal to accept what seems like an inevitable and increasingly crushing election loss has many in media rightly worried about the political repercussions of such a move, with some sounding the alarm over a potential coup d’etat in the US (e.g., Salon, 11/11/20; Washington Post, 11/12/20; Guardian, 11/13/20; New Republic, 11/13/20).

The New York Times, the country’s flagship print publication, has been leading the condemnations, accusing the president of “vandaliz[ing] our country” (11/11/20), diagnosing him as a narcissist and a sociopath, and citing his attempts to cling to power as “a brutal renunciation of American democracy” (11/11/20). 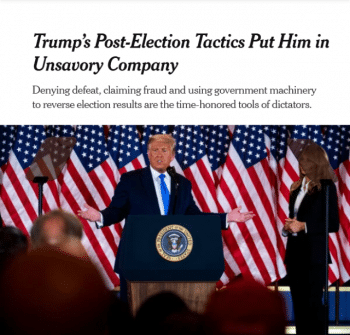 For Higgins, Trump was effectively “shatter[ing] the bedrock democratic tradition” of the US, sending it from the “free world” into the realm of tyrannical states that the United States has spent so long opposing in the name of democracy and free elections. (In reality, the US provides military aid to three-quarters of the world’s dictators, although corporate media use that word almost exclusively to refer to politicians Washington does not like—FAIR.org, 4/11/19.)

Of course, Higgins conceded, Trump is not as bad as Milosevic or Maduro, and “does not have to worry about being charged with war crimes and genocide, as Mr. Milosevic was.” This may be news to the people of Yemen, Afghanistan, Iraq, Syria or any other nation Trump has personally ordered bombed, or to countries whose diplomats he had assassinated, or to almost a quarter of the world’s population under deadly American sanctions.

Higgins asserted that, like Trump, Maduro “fraudulently manufactured a victory in a May 2018 election,” a claim that has as little basis in reality as Trump’s claim to have actually won the 2020 presidential race. Unlike the US, the Venezuelan election featured a timely vote, with state-of-the-art voting machines that were watched over by hundreds of distinguished international observers, whose reports attest to the process’ cleanliness (FAIR.org, 5/23/18). Maduro won more than 4 million more votes than his closest competitor—an unsurprising result (PAP, 5/20/18), due to widespread boycotting of the balloting and a split in the remaining opposition vote between two candidates. 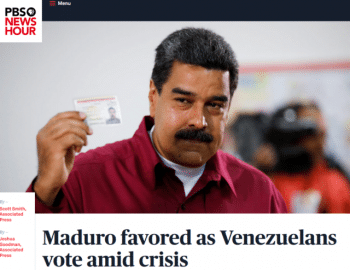 Venezuelan President Nicolás Maduro’s re-election was widely anticipated (AP, 5/20/18)–but after the voting, it was conventional media wisdom that his victory could only be explained through fraud.

After that election, however, the US-backed opposition cried foul, and attempted to overthrow the government multiple times, using tactics not dissimilar to Trump’s post election maneuvers. Yet Higgins spoke approvingly of Trump for sanctioning Venezuela (actions that have caused the death of at least 100,000 people, according to an American UN special rapporteur), and for recognizing self-declared president Juan Guaidó as rightful ruler. A recent public opinion survey conducted found that Guaidó enjoyed the backing of only 3% of Venezuelans—and this was before his infamous “Bay of Piglets” coup disaster.

Thus, for the Times, crying election fraud then staging a coup is bad, and just like what dictators do—unless it is the US making dubious claims of electoral fraud against official enemies, in which case it is an honorable practice. Such is the confusing world of elite media pundits.

Ever since Venezuela voted in a leftist in 1998, the Times has advocated overthrowing the Venezuelan government, its editorial board effectively endorsing the short-lived coup against President Hugo Chávez in 2002 by claiming that no such event had even taken place.

With yesterday’s resignation of President Hugo Chávez, Venezuelan democracy is no longer threatened by a would-be dictator. Mr. Chávez, a ruinous demagogue, stepped down after the military intervened and handed power to a respected business leader, Pedro Carmona.

Thus the Times (4/13/02) wrote as Carmona was firing all elected officials and giving himself supreme power to rule by decree. A 2019 FAIR study on Venezuela (4/30/19) found that the Times published 22 pro-regime change articles over a three-month period, and none that opposed the removal of the democratically elected government.

Not a coup, just a ‘surprise’

Trump’s actions also mirror those of the US-backed right wing in Bolivia, which lost an election handily last October, only to cry foul and launch a successful coup against the rightful winner, President Evo Morales, another socialist and a figure of hate in corporate media (FAIR.org, 4/11/19).

The New York Times (11/11/19) editorialized that forcing out the Bolivian president who had just been re-elected by a margin of more than 10 percentage points was “the only remaining option.”

As far-right Senator Jeanine Añez (who did not even stand for president, and whose party received just 4% of the vote) was beginning to order roundups of journalists and oversee massacres of opponents, the Times was in raptures. Again refusing to use the word “coup” to describe events (FAIR.org, 11/11/19), its editorial board (11/11/19) described Morales as an “arrogant” populist who “brazenly abus[ed]” his power, “shed his legitimacy” and “crushed any institution” in his way. The board accused him of presiding over a “highly fishy” election, citing an Organization of American States (OAS) declaration that talked of “clear manipulation” of votes. The Times also applauded the right-wing for “upholding democratic rules and institutions.”  This apparently forced Añez to step into a “vacuum of power.”

On the same day, the Times published an opinion piece (11/11/19) headlined “How the Ambitions of Evo Morales Contributed to His Fall,” which actively dismissed the idea this was a coup, despite the military literally placing the presidential sash around Añez’s neck.

As was obvious at the time (CounterSpin, 11/21/19), the OAS claims held as much water as Trump’s fantasies about nationwide electoral fraud. However, only seven months later—well after the dust had settled and Añez was ensconced in power—did the Times (6/7/20) acknowledge the OAS report to be flawed. But even after that, the paper (9/17/20) continued to carry water for Añez’s regime, euphemistically claiming she came to power in a “surprising” fashion after a “chaotic” election and presided over a “stormy year in power.”  It’s an unhelpful description of a ruler who came to power in a military coup and oversaw shootings of her political opponents, with only a nationwide uprising forcing her to finally concede to an election, in which her rule was comprehensively repudiated.

Imagine trying to describe an elephant without ever using the word “elephant.” Only writers of prodigious talent could do so convincingly. Likewise, refraining from using the word “coup” where it is obviously appropriate takes huge effort, but appears to be Times policy, the word barely arising in a year of coverage, except as an accusation in the mouths of supporters of Morales (FAIR.org, 11/11/19, 7/8/20, 10/23/20), a man long demonized as an authoritarian. Writing about the coup, it is difficult to avoid constant repetition of that word in every paragraph, so not mentioning it at all is a serious achievement.

Even as Morales returned to Bolivia last week after the landslide election that dispatched Añez and saw the return of the Movement to Socialism Party, the Times (11/9/20) was still attempting to gloss over the fact of the coup, laughably describing it as Morales’ “failed attempt to keep power” that “tore the nation apart and sent him into exile.” Morales’ return, the Times informed its readers, “worried” Bolivians, who were “anxious to move beyond the political turmoil unleashed by his divisive bid for a fourth presidential term.” Perhaps the heightened political tension had more to do with the far-right coup, the massacres that followed it, the repression of critical media, expulsion of foreigners and the suspension of elections and basic rights — little of which even avid Times subscribers would know about, unless they were skilfully reading between the lines.

Venezuela and Bolivia are far from isolated cases. In fact, a study done by Adam Johnson (Truthdig, 1/29/19) found that the New York Times editorial board has explicitly supported 10 of the 12 American-backed coups in Latin America since 1954. 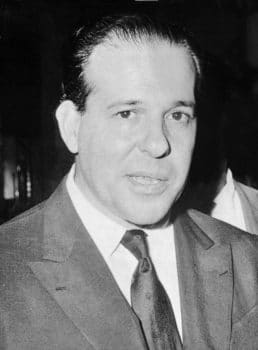 The New York Times editorial board (5/8/64) on the military overthrow of Brazil’s democratically elected President João Goulart: “We do not lament the passing of a leader who had proved so incompetent and so irresponsible.”

For example, two days after a military coup in Brazil which ended the liberal reformist era of João Goulart and installed over 20 years of fascist dictatorship, the Times’ editorial board (4/3/64) endorsed the “peaceful revolution” against a figure who “had almost no supporters.” Refusing to use the word “coup,” they concluded, “We do not lament the passing of a leader who had proved so incompetent and so irresponsible.”

One month later, the board (5/8/64) wrote of Brazil’s supposed “widespread feeling of deep relief and of optimism” that the “far leftist” “regime” of Goulart was over, and announced that the “nation appears to have been yearning” for a “political clean-up” of “extremists,” while applauding the widespread imprisonment of liberal government officials on the grounds that they were “communists.”

And like with Morales, the New York Times (9/12/73) also blamed Chilean president Salvador Allende for his own overthrow in 1973. “No Chilean party or faction can escape some responsibility,” it wrote.

But a heavy share must be assigned to the unfortunate Dr. Allende himself. Even when the dangers of polarization had become unmistakably evident, he persisted in pushing a program of pervasive socialism for which he had no popular mandate.

The editorial board also casually gaslighted its own audience, insisting that

there is no evidence that the Nixon administration seriously considered the maneuvers against Dr. Allende…. It is essential that Washington meticulously keep hands off the present crisis, which only Chileans can resolve. There must be no grounds whatsoever for even a suspicion of outside intervention.

(The nongovernmental National Security Archive in DC, as it happens, just released a trove of documents relating to the Nixon administration’s strenuous efforts to overthrow Allende.)

Ultimately, for the New York Times, the legitimacy of crying election fraud is not based on whether it actually happened, but comes down to its political utility. While the Timesdenounces Trump’s attempts to overturn the results of the election, when it comes to enemy countries, any accusation, no matter how baseless, is treated with respect and deserving of amplification. The final insult is that the paper accuses legitimate governments trying to defend themselves against anti-democratic coups of deploying the same tactics as the man trying to overthrow them.