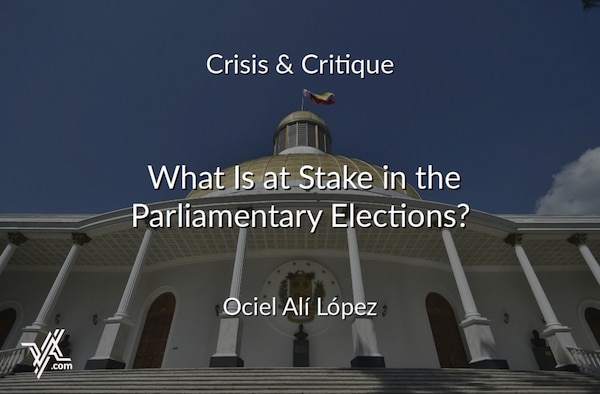 Venezuela is holding National Assembly (AN) elections on December 6 and there is a lot at stake.

Washington has been persistent in its decision to undermine the event, going as far as levying sanctions against opposition figures who decided to place their bets in the electoral battlefield to try to stop the government from getting total political hegemony in the country.

On September 22, the Treasury Department sanctioned five opposition leaders, accusing them of “complicity” with the governments in their efforts to have their parties run in the elections. Among them was Bernabé Gutiérrez, secretary-general of the historic Democratic Action party, the most popular opposition outfit.

The furious persecution from the U.S. government has now gone beyond the borders of Chavismo and started to fire against the opposition camp with the goal of blowing up any political solution.

The so-called MAGAzuelans, radical Venezuelans living abroad (especially in Florida) who supported outgoing President Donald Trump, openly call for a U.S. military invasion and label anyone who takes part in elections as a “regime collaborator” or “traitor.” As a result, they are aiming all their social media firepower at the opposition running in the elections.

Among opposition ranks, the split on whether or not to take part in the contest has only increased its internal divisions, and the situation is getting closer to that of generalized dispersion.

Meanwhile, the campaign goes on, even if with little enthusiasm, particularly when compared to the 2015 AN elections which saw a record 74% turnout. The pandemic and quarantine conditions are also factors.

With the odds stacked against it, the moderate right is going for an electoral upset which will create a new opposition to the government outside the radical spectrum pushed from Washington and Florida.

Most high-profile opposition figures have called for abstention, but this is not accompanied by any tangible strategy to achieve their goals outside the existing electoral framework. Even more so, after the political ineffectiveness of the Guaidó “interim presidency” and the failure of the regime change attempts, including the April 30, 2019 military putsch, Operation Gedeon, the humanitarian aid showdown, and a long list of events whose common denominator is their lack of success.

As a result, Chavismo is probably set to recover the parliamentary majority it lost in 2015 with no major hurdles.

Guaidó’s current is organizing a consultation for December 12, asking people whether they “reject the December 6 elections.” A call that has not garnered a lot of enthusiasm even among Guaidó’s supporters. No other opposition leader has endorsed it, and the initiative looks even weaker after Trump’s defeat.

An electoral triumph by the government and its allies means taking over the only body outside its control and extending its influence. The new National Assembly will be able to appoint a host of public officials: CNE rectors, attorney general, comptroller and ombudsman. If appointed by the new AN, these figures will have their posts until the second half of the decade, while Supreme Court justices, according to the law, will last until the early 2030’s.

With all these new public powers, when the traditional opposition decides to return to the electoral battlefield it will be up against a fierce pro-government structure that will limit their room to maneuver.

Something similar happened in 2005 when opposition factions agreed to abstain. The result was total hegemony for Chavismo, allowing it to peacefully govern even when it lost elections or had to face political destabilization – since it comfortably held control over most public powers. In the 2018 presidential elections, the (US-backed) opposition again called for a boycott. President Maduro easily won reelection.

Not even high abstention levels (75% in 2005, 54% in 2018) managed to undermine institutions, and the “delegitimizing” goal remains a very abstract concept that has little to do with actual existing power.

If history repeats itself, oficialismo will again take home a victory that will ensure key public posts beyond the current Maduro term, which should end in 2024.

It is plainly obvious that, just like we saw in recent Venezuelan elections, the European Union and several Latin American countries, especially those in the weakened Lima Group, will not recognize the results, thus falling in line with the Trump White House.

This non-recognition paved the way for open attacks against Venezuela. But while these managed to seriously hurt the economy, the internal structure of the governing forces has not been hurt.

With Trump’s memorable defeat and the expectations surrounding the new Joe Biden administration, alongside the weakening of fierce anti-Venezuela governments such as Colombia and Chile, the violent solution seems to have lost strength.

Guaidó’s “interim presidency” can only count on Venezuelan assets handed over abroad, such as oil subsidiary Citgo. But even UK courts have called the opposition leader’s position into question, a mere months after he was hosted by Prime Minister Boris Johnson himself.

The radical opposition itself is looking ever more divided, with different sectors and leaders turning their guns against old anti-Chavista allies.

The moderate opposition, in contrast, has intensified its rupture with the pro-abstention groups, betting on a positive result which could show the world a different way of handling the conflict.

The success of these moderate forces essentially relies on the level of electoral participation. However, this vote does not seem to generate much empathy among opposition voters who have been let down time and again either by the opposition or the government.

The December 6 results can end up sinking the opposition for good, or, in what is an unlikely scenario, revive an electoral opposition led by traditional parties such as Democratic Action (several parties are running after Supreme Court interventions which imposed new juntas) and emerging forces such as evangelical groups and current or former opposition governors.

For the first time, Chavista forces are not running in a unified bloc for an election.

It is evident that the United Socialist Party of Venezuela (PSUV) can count on a die-hard vote. Even though it has receded from the glory years, the PSUV remains the country’s most popular party thanks to Chávez’s legacy and an electoral machinery that is successful due to its territorial organization. While it is unlikely to surpass the 6 million votes garnered in the 2018 presidential elections, the party hopes to get at least reach 5 million out of an electoral roll of about 20 million. In a high abstention scenario that should be enough.

Nevertheless, its prospects to secure votes are not easy, with an economic crisis, a financial/oil blockade, and the economic model we’ve witnessed in Maduro’s second term. This has seen the strengthening of ideological “enemies” such as dollarization and imports, while the national economy, the Bolívar and Chavismo’s social programs (missions, subsidized food programs, housing, etc.) have receded.

Another factor is the launch of the Popular Revolutionary Alternative, with a number of historic leftist parties breaking ranks with Maduro and running a separate list of candidates under the ticket of the Venezuelan Communist Party (PCV). The PCV is practically the only party not to have been intervened by the Supreme Court, which appointed ad-hoc boards in other Chavista parties such as Homeland for All (PPT) and the Venezuelan Popular Union (UPV), so that these would run in an alliance with the ruling PSUV.

Despite the setbacks, the government is set for a solid majority in the National Assembly, unless there is a surprise. From there, it will look to rebuild its political hegemony for the second half of the decade.

Many things will be defined this December 6, from the new correlation of forces in the legislative chamber to the very survival of the Venezuelan opposition. The election will also send a clear signal to the Biden administration that the erratic U.S. strategy will no longer do.

Trumpism tried as hard as it could to undermine an electoral solution. It is now up to the opposition to reinvent itself to try and survive in the post-Trump era.

Ociel Alí López is a Venezuelan researcher who has published numerous written and multimedia works. He is dedicated to analyzing Venezuelan society for several European and Latin American media outlets. He is a co-founder of alternative Venezuelan state television station Avila TV in 2006. He is the recipient of the CLACSO/ASDI researcher prize and the Britto Garcia literature award.