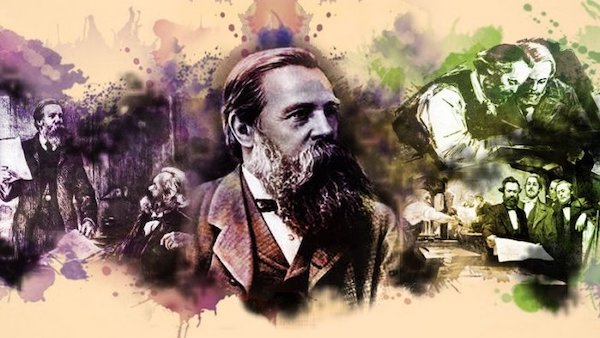 It is not at all strange that “the return of Marx”–the renewed interest in his ideas, particularly since the 2008 capitalist crisis–has been accompanied by an admittedly more modest return of Friedrich Engels. There are new studies and analyses of writings and their participation in the revolutionary movement. These are aided by philological work on the texts of both men, as well as reconstructions of the contexts in which they worked and debated. All this will help prepare a complete and definitive edition of the works of Marxism’s founders.

Engels himself defended the giving of Marx’s name to all of this. “I have spent a lifetime doing what I was fitted for, namely playing second fiddle [to Marx],” he wrote to Johann Philipp Becker in 1884. The history of their friendship has been analyzed abundantly from many different perspectives, typically invoking their personal characteristics. But the truth is that a friendship as generous as it is fruitful also shows how powerful the bond can be when sharing a common revolutionary objective.

Terrel Carver’s biography The Life and Thought of Friedrich Engels, revised and updated for this anniversary,1 points out a less positive aspect of these recent “returns.” In many cases, even if there are positives, what is salvaged in books such as that of Tristram Hunt2 or in films such as 2017’s The Young Marx is the “human side” of Marx and Engels. Their biographies are presented in terms of their personal relationships, both between themselves and with their families and loved ones, in keeping with a fashion for rescuing “flashy” personalities that in many cases trivializes their ideas and political positions. Engels gets renewed attention in these cases not because of a deeper or better appreciation of his work, but because his biography, alongside what Carver calls the “comparatively dour and serious Marx,” offers greater possibilities of becoming a colorful character.

The truth is that Engels’ theoretical work was able to widen the battlefield for Marxism, entering terrains in which Marx did not get involved–or rather, in which he was nourished by the writings of his friend. Seeking to propagandize, systematize, and take the measure of Marxism’s strength against a variety of enemies and adversaries, Engels’ work allows us to approach–beyond the strands he shared with Marx–issues as broad as the definition of the state, the military question, urbanism, feminism, and ecology. Many of these, moreover, have become increasingly current and more pressing in recent years.

Some examples from the last decades, not all of them written from a Marxist position and some critical, show the wide range of topics in which Engels’ writings enjoy prominence. Following in the footsteps of anthropologist Stephen Jay Gould, who had defended Engels’ work-centered perspective on human evolution,3 Richard Levins and Richard Lewontin dedicated their book The Dialectical Biologist: “To Frederick Engels, who got it wrong a lot of the time but who got it right where it counted.”4

Many others have highlighted this area of Engels’ work as fundamental to thinking about the relationship between capitalism and ecology. Such is the case of Paul Blackledge in his book last year, Friedrich Engels and Modern Social and Political Theory,5 and of John Bellamy Foster in numerous works. In a recent article, he summarizes it as follows: “Two centuries after his birth, the depth of Engels’ understanding of the systematic nature of capitalism’s destruction of the natural and social environment, together with his development of a dialectical naturalist perspective, makes it, along with Marx’s work, a starting point for a revolutionary ecosocialist critique today.” In turn, geographers such as David Harvey have come to consider Engels to be a precursor of critical approaches to urbanism. In a recent interview, Harvey recalled that his interest in Marxist theory in the study of urbanism began when he read Engels’ 1873 pamphlet on the housing problem.

As Martha Gimenez points out in her latest book Marx, Women, and Capitalist Social Reproduction,Engels’ work The Origin of the Family, Private Property, and the State “established the theoretical foundations for Marxist feminism.”6 Multiple reviews of this work, many of them critical, nevertheless recognize Engels’ effort to elevate the oppression of women to the level of the relations of production in class societies, thus moving Marxism away from the strictly “moral” treatments other socialists had given the problem while systematizing elements that had been brought up in other works, both with Marx and by Marx alone. Engels’ powerful denunciations of male domination did not exclude working-class families. As Wendy Goldman points out in her study of the problem of women in the Russian Revolution,7 these were an antidote for combating anti-feminist prejudices from which the socialist movements were not exempt, and an inspiration for revolutionaries such as Clara Zetkin.

The field of strategy and the military problem already includes numerous analyses that recognize the importance of Engels, even above Marx himself. For example, Michael Boden, in First Red Clausewitz,8 considers him to be one of the principal contributors to the field of military history and theory in the 19th and 20th centuries. Sigmund Neumann and Mark von Hagen, in “Engels and Marx on Revolution, War, and the Army in Society,” elaborate on his capacity to foresee future developments in the field of military strategy and technique (an area they consider quite sparse in Marxist studies, surprisingly for a theory whose goal is revolutionary action).9 Wolfgang Streeck, in a recent article, expands on the importance of these elaborations for the theory of the state: “His contribution in this field was due in part, I would argue, to a particular affinity between the nature of modern warfare in the context of capitalist development and Engels’ readiness for undogmatic observation, which enabled him to lay the groundwork, at least, for a much-needed state-theoretical supplement to the political economy developed by Marx and himself.”

To cite an example from Argentina, Marx discípulo de Engels by Martin Mazora is a reevaluation of the weight Engels’ youthful writings had on the core of Marx’s economic thinking and his formulations in Capital.10

Beyond the agreements or differences one may have with these books and articles, they and the longer list that could be added illustrate the renewed interest in Engels’ work. However, it must be noted that within Marxism since the middle of the 20th century, the tendency was to separate Engels from Marx. This is how Kaan Kangal sums that up in his recent book:

One tale suggests that Engels is not just the co-founder of modern socialism but also its malevolent detractor. As forerunner of dialectical materialism Engels allegedly co-invented “Marxism” and damaged it at once.… Engels is charged with metaphysics, dogmatism, eclecticism, positivism and so on.…

Another tale asserts the opposite: whatever stands and falls with materialist dialectics is not an invention of Engels but a product of Marx and Engels’ collaboration.… Those who come up with strange accusations against Engels do so for political reasons. What underlies their account is a hidden anti-communism under the mask of scholarship.11

Kangal’s book is dedicated to recontextualizing and discussing, as a compilation of diverse projects, Engels’ work published after his death–which includes his most challenged writing, Dialectics of Nature.

The underlying reason for the emergence of these two opposing accounts is not difficult to find: Stalinism raised a monolithic and indisputable vision of the “founding fathers” and their heirs (which ceremonially passed through Lenin and culminated, of course, with Stalin)–spread throughout the world through the various Communist Parties–that was used to water down Engels’ pamphlets and articles to be more suitable for thematic compilations and manuals than the intricate or incomplete texts of Marx (many of which remained, at that time, still unpublished). When this mechanistic, simplified, and utilitarian version of Marxism, which became part of “Marxism-Leninism,” reached a crisis, many people renounced Marxism in its entirety, while others who explored the roots of that dogmatism ended up attributing it to Engels. Even in current studies, however, little bibliographic support has been found for this hypothesis. Rather, there are enduring examples of ongoing exchange and agreement, expressed in works signed by one or the other. The analysis of Engels’ legacy has therefore, since the middle of the 20th century, taken on a minimally defensive tone.

To this must be added the various actions that had already been taken by the German Social Democrats on Engels’ works. After Marx’s death, they helped organize the Second International, and their leaders–after feigning respect for “Marx’s collaborator,” did not hesitate, even while Engels was still alive, to adapt his texts to their revisionist objectives. But the problem was not limited to justifying reformist political positions. Engels himself had critically called out different groups linked to social democracy for treating Marxist theory in ways that contributed “to reduce Marx’s theory of development to a rigid orthodoxy which the working man is not expected to arrive at by virtue of his own class consciousness; rather it is to be promptly and without preparation rammed down his throat as an article of faith.”12

In the most benevolent evaluations of this last period of Engels’ work, with Marx no longer around, it is often argued–by way of an apology–that Marx’s younger friend had to propagate and systematize the ideas of Marxism for a growing communist movement, and that this “popularization” task imposed simplifications and polarizations that were not present in Marx’s legacy. Without denying that such could be the case in all theoretical work, especially work of such magnitude, it comes across as quite a weak defense that the task of spreading revolutionary ideas so they come to life in the workers’ movement is a problem or an obstacle rather than necessary and exciting–not to mention that it requires probably more, not less, understanding of their foundations.

This is not a defense of some unity of the two authors–or of any other Marxist–forged in granite. Distinguishing the possible differences between the approaches of Marx and Engels can bring nuance and novelty that lead to a better understanding of the development of Marxism and, above all, may be fruitful for today’s revolutionary tasks. That defense, which persists in many cases, should be challenged, because it forces distinctions that threaten to be as sterile as the monolithism in which they are reflected. Marx does not need to be “saved” from Engels, nor does Engels lack arguments of his own worthy of wide discussion on their own terms, without taking, as he himself asked in his letters, “every word I have said above for gospel.”13

As can be seen in the changes of perspective with which Engels’ texts have been approached over time as we reach the 200th anniversary of his birth, discussions and evaluations of the Marxist legacy are linked to the historical developments it has undergone. Ultimately, they are linked to the relationship of forces in the class struggle that he placed at the center of The Communist Manifesto he wrote with Marx. If anything stands out from his legacy, it is the stubborn will never to dissociate a relentless criticism of the capitalist system, in every respect, from the need to put an end to it.

First published in Spanish on November 22 in Ideas de Izquierda.

Ariane Diaz was born in Buenos Aires Province in 1977. She has a degree in Literature and is a member of the Socialist Workers Party (PTS). She compiled and prefaced the books Philosophical Writings, by León Trotsky (2004), and The Meeting of Breton and Trotsky in Mexico (2016). She wrote in the book Dialectical Constellations. Tentativas sobre Walter Benjamin (2008), and writes on Marxist theory and culture.