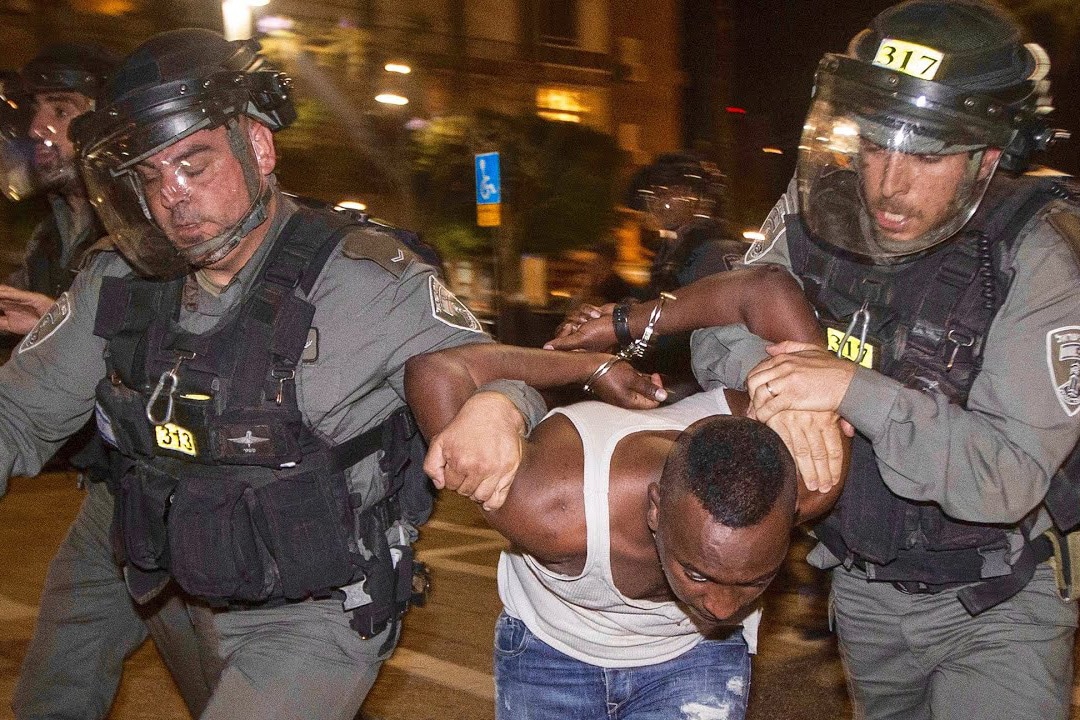 In the face of postwar condemnation of Western conquest and apartheid domination of countries such as Rhodesia and South Africa, as well as a more recent global tide of Black Lives Matter consciousness, Israel has, via recent Western political media’s ideological reengineering, escaped scrutiny for its systemic racist colonial construction, even when its victims are Jewish people of color. Even when reports of its racism escape this ideological censorship, examples of racism in Israel are treated as isolated incidents, rather than systemic characteristics of the entire racist regime.

In 2015, African-American Jewish mother Idit Malka and her young son attempted to visit Israel as part of an extended family celebration. According to the Jewish news agency Mondoweiss, “Malka was not even able to make it out of Ben-Gurion Airport. She and her 10-year-old child were, upon arrival, promptly detained in a holding cell for close to 48 hours.”1 Both Mondoweissand the Jerusalem Post reported that, before being deported, an Israeli woman official screamed at Malka that “Eretz Yisrael isn’t a country for cushim [a racist Hebrew slur for Black people]”2

In the period prior to her visit, Malka had come to believe that, as a Black Jew, she was also permitted to regard Israel as a homeland. What she believes now as a Black woman having experienced Israeli racism is open to speculation. However, had she actually succeeded in going on to spend protracted time in the country, and perhaps experienced its ongoing practices, it might have caused her to rigorously revise her opinion.

Israel has subjected Black Jews to forced contraceptive injections. In 2013, Haaretz and the Times of Israel put the figure of suppressed Black Jewish reproduction at 50 percent.3 That is, even according to Israel’s own media at the time, over 130,000 Black Jews have had, as a matter of institutional practice, their potential reproduction forcibly curbed by up to half.4 Invoking the horrors of Nazi practices and illuminating the reality of modern-day eugenics, even Forbes magazine described it as “forced (if temporary) sterilization.”5

In 2009, Israel’s Ynetnews revealed that there were Israeli neighborhoods operating whites-only housing polices—designed specifically to keep out Black Ethiopian Jews—citing the town of Ashkelon as an example.6 The irony of white Western settlers keeping Black Jews out of the town is that, prior to the Nakba, Ashkelon had a ten-thousand-strong Indigenous Arab population. In 2012, Israel’s Jerusalem Post was still citing whites-only housing practices. One resident in the city of Kiryat Malachi was cited by the news outlet as supporting the racist practice, proclaiming that “a good Ethiopian is an Ethiopian in a grave.”7

In 2017, the Daily Beast reported that Tel Aviv was racially segregating its kindergartens to keep Black and white toddlers apart.8 In 2018, Israel’s Haaretz further confirmed this segregation of children.9 Similarly, for years, Israel has rejected so-called Black blood donations as “unclean,” which on occasion has caused race riots.10 In 2013, the Times of Israel reported that this restriction was even imposed on the blood donations of the unusually prominent Ethiopian Jewish politician Pnina Tamanu Shata.11

In 2016, the U.S. San Francisco Bay View National Black Newspaper reported that “over three hundred Black Jews have announced their intention to refuse any military order to report for reserve duty, accusing the Israeli government of state-sponsored racism against citizens of Ethiopian origin.”12 This widespread attitude was hardly surprising given the climate and consciousness around race in the country. For example, in 2015, numerous news agencies, including Ynetnews, the Times of Israel, and the Jerusalem Post, reported a police attack on an Ethiopian Jew doing his national service, who was even in his Israeli Defense Forces uniform at the time of the assault. Hundreds protested when it was announced that police would escape prosecution.13

One of the marketed excuses for Israel’s colonial conquest of Palestine is that the Jewish white Western invaders supposedly shared an identity with Indigenous Jews of the region. Yet, in terms of colonial racism, Jewish white settlers conquering Palestine clearly regarded themselves as an elevated, superior, separate Western ethnic group, because among their first victims were actually Indigenous Middle Eastern Jews. In 2017, it came to light that a large number of children who had been brought up by settler parents were actually Yemeni-Jewish. Blood tests demonstrated that they had been stolen from Yemeni parents who had been regarded as too culturally primitive to successfully rear their own children.

Known as the Yemenite Children Affair, in the first decade after the establishment of the state of Israel in 1948, there was a systematic kidnapping of newborn Yemenite children, carried out by Israeli hospitals and government institutions. Mothers, who often were in Israel for a short time and did not speak Hebrew, would enter hospitals or other state facilities to give birth. Once the child was born medical staff told the parents the child died.… The babies who went missing, parents claim, were given away to childless Ashkenazi families (Jews of European descent–the dominant ethnic group in Israel at the time).14

However, as Mondoweiss further pointed out, the complete extent of settler crimes against the Indigenous Yemeni Jews also included eugenics-like human experimentation: “a Knesset committee followed up by confirming earlier this month that Yemenite babies died during the 1950s after state medical institutions conducted experiments on them.”15

The BBC refused to publicize this major scandal, but the un-broadcast “The Yemenite Children Affair” story can still be found buried on its website. In it, its reports confirm that “there are healthy babies who died from an experimental treatment. It’s a crime, it was on purpose, and it led to their death.”16

The BBC’s hidden un-broadcast report also concedes, as part of Israel’s overall strategy, that “post-mortem examinations were carried out on children, who were then buried in mass graves in violation of Jewish tradition, the special Knesset committee on the disappearance of children heard. In some cases the children’s hearts were removed for US doctors, who were studying why there was almost no heart disease in Yemen.”17

Obviously, human experimentation, like the forced sterilization of Black Jews, is reminiscent of Nazi policies. Strategically, this inescapable comparison is something Israel forcibly tries—most often through the imposed International Holocaust Remembrance Alliance definition—to suppress via the false ideological characterization of this analysis as anti-Semitic; in effect, deliberately exempting Israel from scrutiny for Nazi-type offences. This, regardless of the fact, that those who actually fought the Nazis vowed to be ever-vigilant about scrutinizing the potential reoccurrence of such fascist practices, wherever they may arise.

There is little space in this article to deal with religious persecution in Israel. But it is worth reporting that during the 2012–13 soccer season, the Russian owner of Beitar Jerusalem football club signed two young Chechen Muslim strikers. Because of their religion, they were routinely described as “dirty Arabs,” which in itself says a lot about the status and treatment of Indigenous Arabs in apartheid Israel. Literally thousands of Israelis drove the athletes out of the club and country in a campaign of intimidation and occasional violence, depicted in the 2016 documentary Forever Pure.

Clearly, Israel is not, as it chooses to market itself, simply a Jewish nation, but a white-settler state that happens to be Jewish, well deserving of the prefix apartheid attached to its name by many, including the United Nations and other human rights observers such as Nobel Peace Prize-winners Archbishop Desmond Tutu and Jimmy Carter. The horrors listed here have all been perpetrated against Black and Indigenous Jewish people of color, including visitors to the country. However, in scale and number, these practices are outsized by the equivalently racist, lethal, tortuous, and entrenched racism against the Indigenous Palestinians. Sadly, if even “Other” Jews can be victims of Israel’s racist oppression, nothing spares Palestinians.

The global cover-up of Israel’s systemic racist oppression has had enormous ramifications for domestic Western democracy. In 2020, Keir Starmer, the new neoliberal leader of the UK Labour Party, sacked his shadow education spokeswomen Rebecca Long Bailey. Long Bailey’s crime was that, after the killing of George Floyd, she retweeted a British corporate media story referring to how Israel had trained U.S. police departments responsible for Black Lives Matter offenses. Astonishingly, Starmer spun this as an anti-Semitic Jewish conspiracy theory. Despite the numerous available mainstream sources citing these police training events, no corporate media news outlet, including the one that ran the original story, contradicted Starmer.

Incredibly, after images of George Floyd being fatally choked were published, Starmer’s first instinct was to use the African American’s death to propagandize for an apartheid country—where many non-tourist areas would likely have been dangerous for Floyd and his family, and entire towns in which the Floyd family would have struggled to so much as rent a decent room. Perhaps part of Starmer’s motivation was the $62,000 donation he received from a pro-Israel lobbyist, revealed by the Electronic Intifada this year. Significantly, during the leadership election, Starmer refused to come clean about his campaign funding.18 In 2016, the UK government and corporate media warned the LGBTQ+ community about potential dangers of visiting North Carolina. Indicative of the second-class racial status of Black Britons, neither Starmer nor other members of the elite professional political and media class have warned them of the potential worst-case scenarios of visiting non-tourist areas of Israel.

Similarly, in the United States, CNN fired African-American academic Dr. Marc Lamont Hill as a contributor after he publicly expressed support for Palestinians. Why should Lamont Hill, as a Black man, say positive things about white-settler colonialism, particularly a white-settler society responsible for the sort of practices listed here? Dr. Lamont Hill has U.S. citizenship, a U.S. passport, and the right to vote. Yet, apparently, he is “only” an African American. Even in the middle of the Black Lives Matter movement, the entire U.S. media establishment finds it appropriate to take the side of what is, fundamentally, merely a foreign country, over an African American’s free speech right to articulate an antiracist sensibility. Clearly, Israeli Zionism is a racist threat, the influence of which is not restricted to just its own invented borders.

The evils that accompany and result from white-settler conquest should have by now been dumped into the rubbish bin of history. Many on the political right, and even the political center, pretend that the ramifications of colonial holocausts and land theft are no longer with us. Despite this, structural inequalities remain the current lived experiences of many. If you were a Black family in a Western society in the twentieth-century postwar era, you would have found that much of the United States was out of bounds to you because of segregation. As recently as 1967, if you were a mixed-race family, around seventeen states—more than a third of the United States—was off-limits because of anti-miscegenation laws (for decades after, mixed-race relations were still rarely permitted to be represented in U.S. popular media). White Australian and white New Zealand immigration policies were designed specifically to keep out the British Black Commonwealth and other Black nationals. Similarly, Rhodesia and apartheid South Africa were no place for Black people, be they arriving immigrant visitors or Indigenous Africans.

Yet, in twenty-first-century, in the form of Israel, Black and Indigenous peoples of the world are expected to put up with variants of these traditional white-settler offenses. And, alarmingly, even parts of the left are threatened into exempting Zionism from the sort of critique and anticolonial resistance leveled against other white-settler societies.