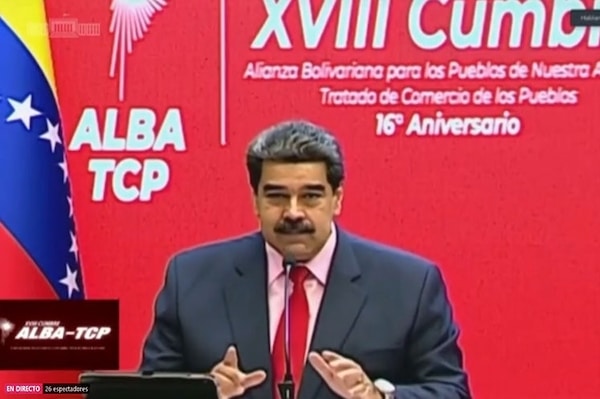 Maduro participated in the ALBA’s (Bolivarian Alliance for the Peoples of Our America) XVIII virtual Summit on Monday as the regional bloc celebrated 16 years since its creation.

The Venezuelan Head of State suggested reinforcing the ALBA bank to sustain vaccination efforts. He added that the region has four vaccines from Cuba and also other options such as the Sputnik V vaccine from Russia.

“We are testing the Sputnik V in Venezuela and it is doing very well,” Maduro said in his intervention.

He anticipated that a massive vaccination could begin in Venezuela in April 2021. Venezuela is also currently running phase 3 clinical trials for a Chinese-made coronavirus vaccine

On a Sunday TV broadcast to the nation, Maduro announced a recent increase in COVID-19 cases and that the government is preparing a strict quarantine in January.

Although this return to radical confinement was said to last two weeks, the specific dates were not informed.

The Venezuelan president called on Defense and Interior Ministers to reinforce security measures in the streets to contain the virus during the Christmas period, while also demanding that the retail sector tighten its protocols. The Venezuelan government lifted a series of restrictions in December in an attempt to boost economic activity.

As of Tuesday, Venezuela had registered 108,840 COVID-19 cases, with a total of 103,271 patients recovered and 965 deceased. The South American nation holds a 95 percent recovery rate.