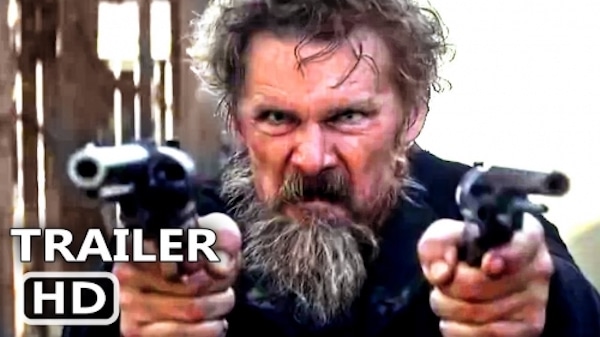 While the last two episodes of Ethan Hawkes recounting of the John Brown story have some emotional resonance, The Good Lord Bird as a whole, derived from a National Book Award winning novel by James McBride, is a postmodern mocking of Brown and Frederick Douglass. John Brown’s incendiary raid on Harpers Ferry in 1859 was the event that precipitated the Civil War, which ended slavery.

Hawkes’ Brown is quite a different figure. He mistakes Henry, the young, freed slave for a servant girl and has him parade around in a skirt, until, in the end, Brown turns the charade into an LGBT acceptance moment. Brown is seen mostly as a raving lunatic, compared by Hawkes to Shakespeare’s Lear, with Hawkes for much of the series playing Brown, as he attempts to free slaves in Kansas, as Lear’s mad scene on the moor. In episode two he shows up at the end to rescue Henry, who he calls Onion, rambling insanely with guns a-blazing, turning what was an astute description of racial exploitation from the point of view of Henry and the other African-Americans in one Kansas town, into farce. 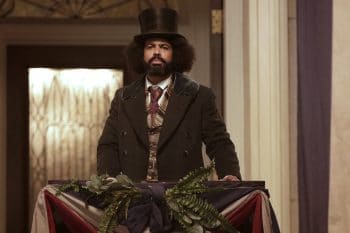 Equally Daveed Diggs, so powerfully dynamic and scene-stealing as Jefferson in Hamilton and so resolute as the revolutionary in Snowpiercer, as Frederick Douglass gives an over-the-top wild star turn to the point where Diggs and Hawkes in the same room as Douglass and Brown are simply trying to upstage one other, with both speaking past each other and simply projecting their own star quality. Douglass’ later bromide about the camera, “I am enamored of the device and the device is enamored of me” supposedly a slight on the publicity-grubbing aspect of the black Abolitionist leader, is in this series simply a description of the egos of the two stars.

Hawkes’ performance and engineering of the series suggests once again that “Hollywood intellectual” is simply an oxymoron, with the emphasis on moron. But there is something deeper and more problematic at work here. Rather than a postmodern debunking of these legends, Hawkes performance fits neatly into a representational history of John Brown, a figure who causes liberals much anxiety. Brown’s quest to wipe out slavery is indisputably seen by an intellectual elite as just, but his violent methods, since he claimed that slavery would not end peacefully and that believers must take up arms to oppose it, apparently still cause fits in liberals. Here, using the postmodern cover, once again that anxiety is expressed as Brown being a full-blown raving lunatic even though history proved him correct. 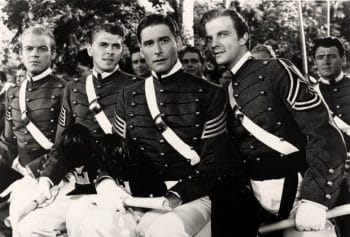 Errol Flynn and Ronald Reagan as Jeb Stuart and Custer join forced to preserve slavery in The Santa Fe Trail.

Another side of Brown’s mission is stunningly captured in the far better season two of Underground, a series by African-American showrunner Misha Green, that was summarily cancelled after its radical affirmation of not only the righteousness of Brown’s cause but also of his method.

An early Brown depiction which helped to set the tone for subsequent portrayals was Warner Brothers’ 1940 The Santa Fe Trail. The previous year Warners had gone out on a limb in its Confession of a Nazi Spy, the first anti-Nazi Hollywood film. The studio was accused of being “prematurely anti-fascist.” In this western, with war breaking out in Europe, famed German American Bund and Nazi sympathizer Errol Flynn stars with Ronald Reagan, future saboteur of the Actors Guild of which he was president, as Jeb Stuart and George Custer.

The two come together to crush Raymond Massey, looking like Moses in a depiction of Brown whose wild-eyed demeanor made it seem like he was constantly in front of the burning bush. In crushing Brown, the two affirm that the North and the South can co-operate to insure the ultimate goal, which they claim is peace at any cost. Needless to say, in this attempt to make up for its earlier “transgression,” Warners proposed isolation and peace as the response to Nazi aggression, accomplished in the silencing of an attempt to promote racial equality.

Massey would again play Brown repeating the same religious zealotry at the expense of any concentration on what Brown stood for in 1955 in Seven Angry Men. In the 1982 television mini-series The Blue and the Grey Sterling Hayden reprised the Massy interpretation, in which the killing of the “traitor” Brown was compared to the killing of Caesar by Brutus and the Roman senators. In the 1986 follow-up mini-series North and South Johnny Cash lent the lilting righteousness of his deeply calloused working-class voice to Brown, but Brown appears in the series for only three minutes, almost as if the producers were too afraid to give much credence to Cash’s rendering of his presence and his message.

This modern rendering of Brown has its moments. Newcomer Joshua Caleb Johnson is superb as Onion, his authenticity and sincerity the antidote for much of the series to Hawkes hokeyness. Henry/Onion is part Huck Finn trying to navigate this treacherous landscape, part Sancho Panza to the realist Brown’s delusional Quixote and part Fool to Hawkes’ Lear. The series also has a picaresque quality as the idealistic Brown finds his finances laid low by a swindler straight out of the corrupt capitalist terrain of antebellum America portrayed in Twain’s The Gilded Age, and Melville’s The Confidence Man.

Brown also has his moments, as when he explains to Onion that the only thing the white man understands that will turn him away from his thirst for the profits of slavery is violence. Later, as Brown faces execution, his son Owen explains that he will not try to rescue him because his father understands the import of his execution:

Most people they don’t die for anything, but he, he died for something.

It is telling though that once Brown is in prison, awaiting hanging, that is shorn of any immediate threat, he is portrayed as saner, calmer and cooler and able to see clearly who Onion/Henry is. The histrionics cease and Brown is presented in a more normative, human way as he awaits the gallows. Hollywood liberals admire martyrdom. They’re just uneasy with the threat of revolution.

Most versions of the story emphasize a dramatic presentation of Brown’s words in court on trial for murder and sedition, his most cogent translation of the attempt to free the slaves into the language of class struggle and rendered extremely powerfully in a recording by Orson Welles:

Had I so interfered in behalf of the rich, the powerful, the intelligent, the so-called great, or in behalf of any of their friends…or any of that class–it would have been all right; and every man in this court would have deemed it an act worthy of reward rather than punishment.

The Good Lord Bird sidelines this statement, which also links to Martin Luther King’s speech just before he was assassinated, linking the black and white working-class struggle. This version dedramatizes the statement, making it simply Hawke’s voiceover as part of a series of letters written from jail. The series, scheduled for release at the beginning of the summer, was delayed by Showtime (and Sky Atlantic) because of the irruption of the Black Lives Matter demonstrations, with the station apparently afraid this John Brown would fuel the fire. For the most part though, they needn’t have worried. 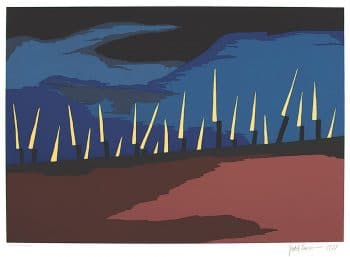 There is a whole other perspective on John Brown, quite strikingly different from Good Lord Bird and its ilk.  In 1941, perhaps in answer to Santa Fe Trail, Jacob Lawrence completed a series of 22 paintings, titled The Legend of John Brown, with Lawrence’s modernist angular and elongated figures and objects and matter of fact narration presenting Brown as a contemporary freedom fighter, shorn of the overlay of religious fanaticism. Good Lord Bird acknowledges Lawrence’s work in its animated title credits.

Particularly striking is a painting near the end of the series titled John Brown with a company of 21 men, white and black, marched on Harpers Ferry. The image which stresses the overcoming of racial tensions in a blending of working-class arms, is a series of light and dark colored knives marching together on the landscape.

W.E.B Dubois in his biography of Brown described him as “a man whose leadership lay not in his office, wealth or influence, but in the white flame of his utter devotion to an ideal.” Dubois stressed Brown’s coming to awareness in the light of previous black struggles for freedom, most prominently that of Haiti’s independence from Napoleon and the French and Nat Turner’s slave uprising in Virginia. DuBois’ termed Brown’s coming to consciousness a realization that “American slavery was the foulest and filthiest blot on nineteenth century civilization.” When asked which white presidential candidate he would vote for James Baldwin replied “John Brown” and the comedian turned radical activist Dick Gregory described Brown as “the number one being that’s ever been produced in America.” 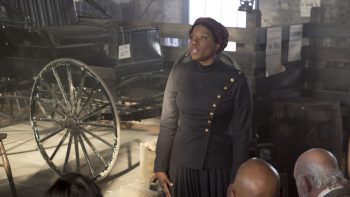 The fittest riposte to Hawkes’ John Brown is season two of Underground, still streaming on Hulu and Prime Video. The season consists of the remnants of “The Macon 7” group of now freed slaves venturing South to rescue their kin. A secondary plot concerns the Anglo woman Elizabeth, who has seen a loved one murdered in front of her by a slaver who recognizes them as abolitionists. Elizabeth, over the course of the season and partially due to her encounter with one of John Brown’s sons, moves from grief and anger to a more measured realization that an institution so deeply ingrained in the American consciousness will require violence to uproot it.

Elizabeth hears but disagrees with the mulatto woman who runs the station on the Underground Railroad and argues that slavery can be eradicated peacefully by freeing one slave at a time. A remarkable moment of the season occurs in an episode that is breathtakingly experimental for television, in which Aisha Hinds as Harriet Tubman first stands before a mirror and then takes the Abolitionist stage and tells the story of her bondage and freedom in an extended take that lasts the entire episode. In the final episode of the season, Elizabeth makes her decision, taking up arms and firing on the slavers who abused her.

For its resolute radicalness in presenting Brown’s struggle and methods as necessary Underground was quickly yanked off the air while The Good Lord Bird on the other hand is on its way a bountiful harvest of trophies in awards season.

Dennis Broe is a television, film and culture critic whose latest works are Birth of the Binge: Serial TV and The End of Leisure and the detective novel Left of Eden. He taught in the Master’s Programme in Film and Television Studies at the Sorbonne. His criticism appears in the Morning Star, on Arts Express on the Pacifica Network in the U.S., on Breaking Glass on Art District Radio in Paris, People’s World,​ and Crime Time. He is an Associate Editor of Culture Matters.