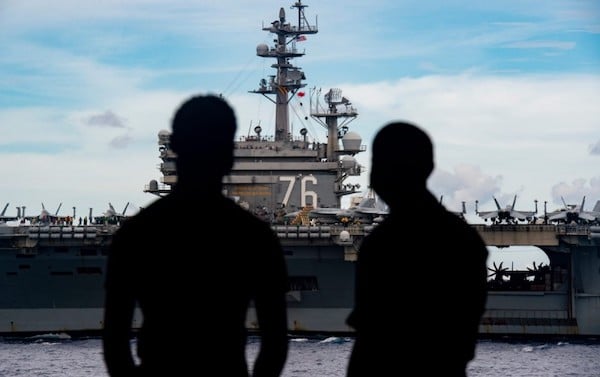 In an article titled “U.S. Navy to adopt ‘more assertive posture’ against China and Russia,” the Guardian reports that the U.S. Marine Corps, Navy and Coast Guard have declared their intention to “accept calculated tactical risks and adopt a more assertive posture” toward Chinese and Russian naval forces. According to Guardian reporter Helen Davidson, the Pentagon intends to “maintain strategic advantage” over the Chinese navy by modernizing its naval forces with smaller, more agile and even remotely piloted ships.

Armed with the facts, any rational, objective observer would conclude that the Pentagon’s heightened belligerence toward Chinese and Russian naval forces is unwarranted and will only exacerbate the risk of a hot war between nuclear-armed states.

The existential risks posed by such a war would be a matter of the utmost concern to an informed citizenry, but nowhere in Davidson’s 500-word screed do we find the information needed to evaluate objectively the Pentagon’s rationale for its latest exercise in sabre-rattling.

On the contrary, Davidson uncritically regurgitates the Pentagon’s dark warning that the “rules-based international order is once again under assault.”

“Rules-based” international order? Would that be the same “rules-based” international order that the U.S. government defiled when it launched a war of aggression on Iraq, or when it armed to the teeth a Saudi-led coalition that is prosecuting a genocidal war on Yemen, or when it conferred upon the apartheid state of Israel the largest military aid package in U.S. history?

While advising her readers that China is “in the midst of a rapid modernisation and expansion of its military power,” Davidson mentions nowhere that U.S. military spending remains more than twice as great as that of China and Russia combined. She seems oblivious to the possibility that America’s stratospheric military spending is fuelling a global arms race, and that China might simply be defending itself from America’s militarism and hegemonic ambition.

Without explanation, Davidson also claims that China’s navy is the largest in the world. As measured by number of ships, that may well be true, but as measured by ship tonnage, America’s navy is nearly five times larger than that of China.

In the vitally important category of aircraft carriers, the Chinese navy is vastly inferior to that of the United States. The U.S. now operates 10 Nimitz-class “supercarriers” which dwarf all other carriers worldwide, both in size and capability. Each such carrier is powered by two nuclear reactors, providing them with virtually unlimited range. In addition to the Nimitz-class, the U.S. Navy also operates nine landing helicopter dock ships of the Wasp and America classes.

By contrast, China has two aircraft carriers, neither of which is nuclear-powered.

Similarly, Russia possesses only one aging aircraft carrier whose condition is so decrepit that it broke down at sea in 2012 and is now accompanied by a tug boat whenever it travels overseas.

Because none of these inconvenient facts finds their way into Davidson’s reporting, her article reinforces the false impression that America is threatened by Chinese and Russian expansionism and that the Pentagon is justified in adopting an even more aggressive posture toward Chinese naval forces in the South China Sea.

With liberal ‘journalism’ such as this, who needs U.S. government propaganda?

Dimitri Lascaris is a lawyer, journalist, activist and member of the Canadian Dimension coordinating committee. He was a candidate in the federal Greens’ leadership race, and finished second with just over 10,000 votes.